I've been building up to a rematch of this one for awhile now, taking in a series of historical epics in anticipation of a second look at one of my least favorite Best Picture winners of the century so far. I do think there's much to be made about the 2000 Best Picture race: here was a chance for The Academy to move in a new and progressive direction, honoring truly innovative and important work from outside America (though directed and written by Hollywood veterans and co-funded with American cash). It could have set the tone for a more globally open and innovative 21st century, not just for awards, but for US film distribution and viewing patterns. But instead the Academy opted for Ridley Scott's CGI-fueled historical epic over Ang Lee's CGI-fueled historical epic. And one the Weinsteins put a stranglehold on everything they could from Hong Kong, the chances of American audiences getting wide exposure to the most exciting and interesting cinema in the world quickly diminished. But this is a long digression, this is supposed to be about Gladiator itself.

The action, at least, is better than I remembered, it's really only the opening battle that degenerates into an incoherent blur, the gladiator fights are instead simply middling examples of Hollywood obfuscation-as-excitement (the opening battle is also topped by a similar one in Oliver Stone's Alexander which as well hinges on a daring cavalry maneuver, but manages to both ratchet up the excitement and violence while at the same time remaining historically accurate), although I quite liked the one with the tigers.

As history it's abominable in just about every particular. It's not so much that it is historically inaccurate, or even that it just doesn't give a fuck about history, it's that it is actively anti-historical, manipulating the facts of the past in service of the narrative it wants to tell, which is a story about two versions of manhood: one virile and stoic; one impotent and emotional. Commodus is transformed into a simpering weakling, a coward and an incestuous pervert. His villainy is sourced in his weakness. Opposite to him in every way is Maximus, the very ideal of honor, loyalty, fidelity, fatherhood and filial piety. Maximus is the guy Chris Kyle thought he was, and this is a Bush-era film to its core: it imagines a world in which peace and freedom can be instilled through violence, war and the sacrifices of noble men. That Marcus Aurelius never did much in the way of seeking eternal peace, his wars against the Marcomanni and Quadi, on-going at his death, was only concluded when Commodus decided he simply wasn't interested in continuing the fight, is an inconvenient fact of history to be ignored, as is the indisputable fact that Marcus very much wanted Commodus to succeed him (and in fact Commodus had been in place as his Caesar for 14 years prior to Marcus's death - co-Emperors were a fairly common practice in Rome, the senior being titled "Augustus" the junior "Caesar"). The idea that Marcus couldn't possibly have made such a terrible decision is an enduring one, however, and it'd be hard to blame Scott for propagating the legend. 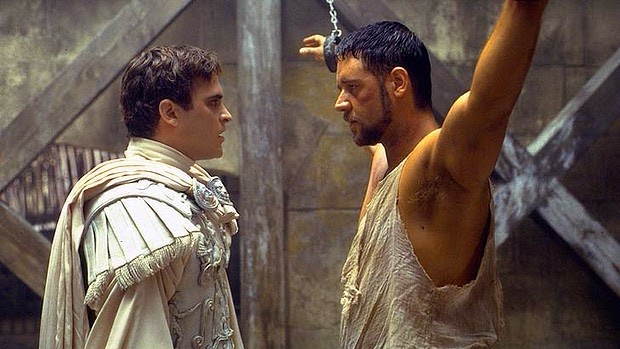 Indeed, Anthony Mann utilizes much the same premise in his Fall of the Roman Empire, though that film at least accepts the political realities of late Second Century Rome. There's no question of the Senate, or the Roman populace (repeatedly identified as "the mob") having any real power at all, which they hadn't for at least a century, if not longer. The reason for this can only be contemporary: it's the neoconservative vision of using force to establish freedom, transplanted to the Roman Empire. Marcus appoints Maximus as the Emperor needed to maintain order while the government transitions from autocracy to democracy, the military dictatorship preceding the withering away of the state. Then the film has the audacity to suggest that Marcus and Maximus's "dream of Rome" a dream of freedom guaranteed by the Roman Senate (never mind that the Senate was never anything like what we'd recognize as democratic or even populist, rather a hereditary oligarchy built on a slave economy), actually will come true. When, in fact, after Commodus's assassination (strangled in his bath by his wrestling partner: Commodus was in fact an energetic lover of games, often partaking in rigged gladiatorial combats, something which engendered popular dislike of him by the deeply class-conscious masses), the Senate quickly put the role of Emperor up for sale to the highest bidder (something Mann's film does well to dramatize). The year following Commodus's death is called the Year of the Five Emperors, you can guess from that how it went down. The ultimate victor in that civil war, Septimus Severus, established a tradition of military dictatorship, infighting and political assassination that came to be the norm for the next century (it's collectively known as "The Crisis of the Third Century"), until Diocletion and then Constantine radically remade the Empire in the late 200s and early 300s. At no point did the Roman Empire ever become more democratic that it was when Commodus was alive: that's why Gibbon started his book with his reign.

It's interesting then to rewatch this now, 15 years after its release and after just having seen Scott's Robin Hood, which similarly twists historical fact in the service of a political narrative, albeit one as informed by the Bush years as Gladiator is in anticipation of them. Crowe's Robin is a mythical figure, a mask adopted by a foot soldier (well, archer, technically), one that, as Maximus does, embodies certain masculine ideals. But the implication is that all of these roles are merely poses, that the actual man is nothing more than a construct, an ephemerality. Just so is that film's dream of freedom - it's one that pointedly is not accomplished by film's end, and indeed it's strongly implied that it cannot ever be - rather the aim of the true hero is the struggle toward universal political freedom, not the justification of certain means of achieving it. The utopia Robin and Marion create can exist only in the magic of Sherwood Forest, and then not by force, but only by withdrawing from the world into a small-scale community, disconnected from the strife of the larger world.

Even still, given all that, I probably would have given it a positive rating if only Oliver Reed had thrown his hat and charged into combat at the end.