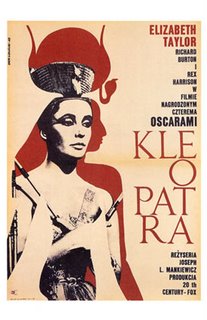 Well, it's been awhile, but back to the list. As always, you can find disclaimers and such along with an up to the minute list of all the years from 1964 to 2005 at The Big List.

14. Son Of Flubber - Sequel to 1961's much better Disney film The Absent-Minded Professor, in which wacky scientist Fred MacMurray invents a very bouncy substance. It has all the flaws you'd expect in a bad sequel.

13. Cleopatra - I haven't actually seen this famously disastrous film in years, so it may be better than I remember it being as a kid. It's a big technicolor Hollywood epic with bad special effects and scenery chewing stars. In addition to the famous pairing of Richard Burton and Elizabeth Taylor, the movie also features Rex Harrison, Hume Cronyn, Martin Landau, Roddy McDowell and Carroll O'Connor. Joseph Mankiewicz (All About Eve, Julius Caesar) ended up as the director, and the film gives story credit to Plutarch, Suetonius, and Appian, which for some reason I find hilarious.

12. The Incredible Journey - A cat and two dogs lose their humans on vacation and have to find their way home. A pretty simple set-up to a very fine live-action Disney film. There's no singing, and the animals don't talk, which is great. There is a fine narration and some pleasant scenery. A classic of anthropomorphism.

11. The Sword In The Stone - Another Disney film, this one the animated telling of the King Arthur story, sort of. It's Arthur as a boy who gets picked on, Cinderella-style, until he meets up with Merlin, his fairy godfather, or something. This was the first Disney animated film credited to a single director, Wolfgang Reitherman, who went on to direct all of them until 1977's The Rescuers. It's a silly slapstick comedy, even by Disney standards, but it's entertaining enough. 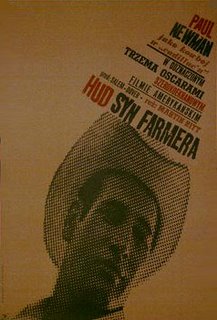 10. Hud - One of Paul Newman's great anti-hero roles is this performance as a selfish, drunken misanthropist Texas rancher. The main interest in the film is the performances, not just Newman's, but also Patricia Neal as a housekeeper and Melvyn Douglas as Newman's father. Based on a Larry McMurtry novel (The Last Picture Show, Lonesome Dove, Brokeback Mountain) and directed by Martin Ritt (The Spy Who Came In From The Cold, #3, 1965).

9. Donovan's Reef - Colorful and relatively inoffensive comedy from John Ford and John Wayne, which I reviewed a couple weeks ago here. It's certainly isn't as profound as their best work, but it's very entertaining and even surprisingly affecting, at times.

8. From Russia With Love - My personal favorite of all the James Bond films, this is the one with the crazy old commie woman with the knife in her shoe. Sean Connery is at his best as Bond, and Robert Shaw (Jaws, A Man For All Seasons) costars along with Pedro Armendáriz (Fort Apache, The 3 Godfathers). Bond's out to get some code-breaking machine from a defecting Russian, or something. Of course, it all turns out to be a trap set by the evil SPECTRE. 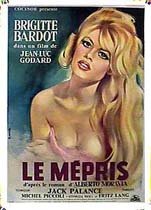 7. Contempt - Jean-Luc Godard's film stars a very hot Brigiitte Bardot as the annoying wife of a screenwriter, Michel Piccoli (The Discreet Charm Of The Bourgeoisie, Belle de Jour, The Young Girls Of Rochefort, among many other classic French art films of the 60s and 70s) who gets hired by Jack Palance to write a film about Ulysses (Homer, not Joyce) to be directed by Fritz Lang playing himself). Palance, Lang and Piccoli argue about film while Piccoli and Bardot's marriage collapses. It's a beautiful film, with a great use of color (reds and whites and such) with an entertaining performance by Palance as the philistine producer. But something bothers me about this film, I'm not sure what it is, it just seems lifeless and dull compared to Godard's other films, all the ones of which I've seen I've really enjoyed. I probably just need to watch it again.

6. Shock Corridor - Wacked out Samuel Fuller masterpiece about a reporter who gets himself committed to a mental institution to follow a lead on a big, Pulitzer-worthy story. What he uncovers, as he himself goes insane (of course) is not the key to the murder he was after, but rather that the whole of society is freakin' crazy. The best, most famous and most iconic image is the young black man who went nuts after desegregating a school and now thinks he's a KKK member. Fuller's style is perfect for out-of-kiltering the world: frantic, shockingly angled shots, over-the-top expressive acting and his screenplay's hard-boiled prose. He flooded the set for the last scene so the studio couldn't change the ending.

5. Charade - Audrey Hepburn and Cary Grant star in this thriller-comedy about mistaken identity and killers in Paris. It plays off the popularity of Grant's roles in several classic Hitchcock films (North By Northwest being the most obvious, but also Notorious, To Catch A Thief, and Suspicion) to create a Hitchcockian vibe without and of the disturbing sexual perversion that was becoming more and more apparent in Hitchcock's films at the time (Vertigo, Psycho, Marnie). Hepburn's husband gets murdered and a bunch of guys are after the loot he stole. Grant may or may not be one of them, but James Coburn and George Kennedy definitely are, and who knows what Walter Mattheau's up to. Directed by Stanley Donen, who did Singin' In The Rain, Funny face and On The Town, with a score by Henry Mancini. Jonathan Demme remade it a few years ago as The Truth About Charlie, but I don't know why.

4. The Great Escape - Classic World War 2 adventure film directed by John Sturges (The Magnificent Seven). The all-star cast includes the great Steve McQueen, as well as Charles Bronson, James Coburn, James Garner, Richard Attenburough and Donald Pleasance. The Nazi's come up with the brilliant idea of locking all the most commonly escaping POWs into one super-prison camp. Shockingly, they all decide to escape. The screenplay's by James Clavell, who wrote Shogun, but don't hold that against it. 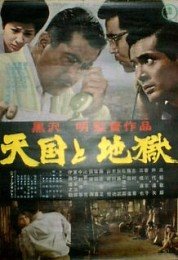 3. High And Low - The closest Akira Kurowsawa came to a real film noir (well, either this or Stray Dog), this film, as it's title indicates, is split in half. The first half takes place almost entirely on one set with one set-up, a shot of the interior of a house. A shoe executive has just risked all his money in an attempt to takeover his company when he learns the son of his driver has been kidnapped, after being mistaken for his own son. When the kidnapper discovers the mix-up, he demands the ransom anyway. This first half of the film revolves around the executive, played brilliantly (as always) by Toshiro Mifune and his dilemma over whether or not to pay the ransom, save the kid and face financial ruin. That's the 'High' part. The 'Low' is the second half, set in the streets of Yokohama as the police track down the kidnapper. St this point the film turns from a static, intense drama into a noirish police procedural. One of Kurosawa's most successful non-period films, it manages to convey his political thoughts without descending into sentimentality like some of his others (Dodeskaden, Record Of A Living being, parts of Dreams). Tatsuya Nakadai and Takashi Shimura plays two of the cops. 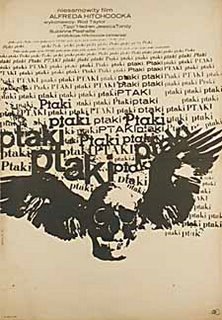 2. The Birds - By far the scariest Alfred Hitchcock movie, it stars ultimate object of Hitchcock's obsession Tippi hedren as a woman haunted by masses of birds for some unknown reason (likely because she's kind of slutty). The film's filled with terrifying (and famous) images (ravens flocking outside a schoolhouse, a house filled with and surrounded by birds just creepily sitting there (memorably referenced in the best Simpsons episode ever). The cast is pretty good, with a great performance by Jessica Tandy, fine work from Suzanne Pleshette and Veronica Cartwright. The only thing that keeps it from being one of my favorite movies ever, or my favorite Hitchcock is the lame performance by leading man Rod Taylor. It's just hard to believe that Tippi Hedren would be so attracted to a brick that an entire species would devote itself to her destruction as a punishment. 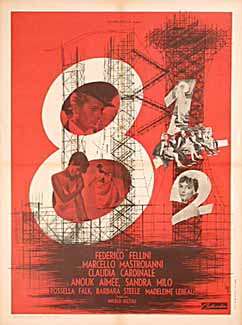 1. 8 1/2 - Federico Fellini's best film (I've only seen three) is generally thought to be a movie about movies, but though it's set in the film world, it's more a movie about writing and the creative process (or lack thereof) in general. It's about the difficulty of writing when you've got writer's block, abut the narcissism of trying to adapt your own life and memories into narratives, about the neuroses of a wealthy cosmopolitan Roman Catholic European in the mid-20th Century. Marcello Mastroianni stars as Guido, the director who can't decide what he wants to do next. Through a series of dreams/flashbacks/whatever, he recounts to himself his various encounters with and fantasies about women (Claudia Cardinale and Anouk Aimée among them.) He spends some time at a spa for cranky rich people who need better water and eventually gets to work on his weird sci-fi movie. The film's poetry starts with the opening scene, as Guido escapes from his poisonous car and floats out over and away from a traffic jam and out to the beach, only to be pulled back to earth by annoying people who want him to do stuff. It's one of my favorite scenes in all of film, and the movie only gets weirder, if never quite as funny or beautiful again. One of My Top 20 Movies Of All-Time.


Some good Unseen Movies this year, including a couple Godard's (he had three this year) and films by Jacques Demy, Billy Wilder, Luchino Visconti, Kon Ichikawa and a couple by Ingmar Bergman. 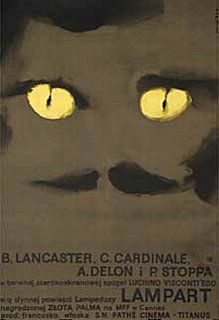 Le Petit Soldat
Les Carabiniers
Youth Of The Beast
Bay Of Angels
Muriel, or The Time Of Return
An Actor's Revenge
The Haunting
Irma La Duce
The Leopard
The Nutty Professor
Tom Jones
The Silence
Winter Light
55 Days At Peking
This Sporting Life
Posted by Sean Gilman at 6:30 PM No comments: