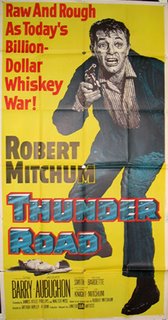 With The Man Who Shot Liberty Valance (#3, 1962) on the TV and a nice martini having it's way with my psyche (and my typing), it's onto 1958, a year in which I've managed to miss almost all the highest repped films. Anyway, see The Big List for previous years and various disclaimers and methodologies.

9. Separate Tables - Perhaps the film most responsible for my irrational hatred of Burt Lancaster, this dull drawing room drama stars Lancaster, Deborah Kerr, David Niven (who won an Oscar) and Rita Hayworth as various residents of a vacation hotel who have a variety of tedious problems. It's based on a play, and it shows.

8. Thunder Road - Some kind of action film starring (and co-written by) Robert Mitchum about a vet who comes home and takes over the driving in the family moonshine business, the kind of business that led to the creation of NASCAR. I don't exactly see the charm in the film, I thought it was kind of dull and overwrought myself, but some folks consider it a classic. I like the Bruce Springsteen song a lot better ("You ain't a beauty, but, hey, you're alright" and so on).

7. Gigi - I'm the first to admit my ignorance of the wonders of Vincente Minelli. I recognize that there's something going on here, but I don't know what it is. I just watched Meet Me In St. Louis today, another Minelli musical whose charms completely escape me. One of the gaps in my film education I guess. Anyway, Gigi stars Leslie Caron as a young fin de siècle courtesan to be who charms the pants off a young cad about town. Maurice Chevalier provides the film's most memorable scene with his more than vaguely disturbing song "Thank Heaven For Little Girls."

6. The Legend Of Sleepy Hollow - Short Disney adaptation of the Washington Irving Story about a nerd chased by a Pumpkin-headed monstrosity because he somehow managed to charm the local hot chick. Good advice to the young and geeky, I think: stay away from the pretty girls or else you'll get yourself killed. Thanks, Uncle Walt.

5. The Left-Handed Gun - A young Paul Newman gives one of my favorite of his performances as a psychotic Billy The Kid in this Arthur Penn film based on a Gore Vidal play. The 1966 film Young Guns (#28) is basically an amalgamation of this and Sam Peckinpaugh's Pat Garrett & Billy The Kid (#6, 1973), set to a hopping 80s score. Newman's in full anti-hero mode as he exacts bloody revenge on the people who killed his English (read: gay) father figure. Penn plays up the serious psychosis in Billy, while Peckinpaugh went more for the charm. Young Guns, on the other hand, had Emilio Estavez. 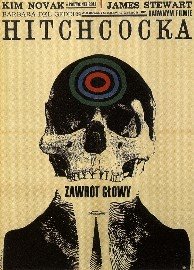 4. Vertigo - The consensus pick for the greatest of all Alfred Hitchcock films, a movie dangerously close to supplanting Citizen Kane from the #1 spot in the decennial Sight And Sound poll, but I've only got it rated the fourth best film of its year. James Stewart plays a detective afflicted with the eponymous acrophobia who becomes obsessed with a client who thinks her past life is trying to kill her. When she dies, he finds a girl who looks just like her and really goes nuts. Frankly, it's a film whose charm I understand but have never felt much of a connection with. Somewhere in the middle it loses me, and I can't exactly explain it. Partly it's Kim Novak, who I really think is terrible. I know she's supposed to be remote and robotic, but it's too much for me. I just can't care anything about her (either version) and thus find James Stewart's obsession with her to be rather inexplicable. It's a film I admire more than like, too cold and clinical for me to really care about. 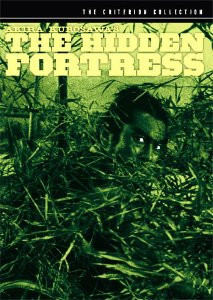 3. The Hidden Fortress - I may get my film geek card taken away for ranking this Kurosawa swashbuckler over Hitchcock's classic of perversity, but screw those freaks, this is my not a blog. Two peasants on the run from war get caught up with a general trying to smuggle a princess across the enemy border into safety. It's Kurosawa's first widescreen film, and he uses it to good effect with complex, detail-filled compositions that, combined with the space-flattening effects of his use of the telephoto lens create a vivid medieval tapestry and emphasizes the oppressiveness of the nature the main characters must traverse. The plot is a pure distillation of the adventure epic, but in the margins Kurosawa transcends the typical genre film and creates something truly interesting and entertaining, if never entirely original: the sheer greediness of the two peasants, their quarreling comic relief has been copied endlessly by lesser filmmakers (George Lucas most obviously), the transformation of the princess from haughty to fully human (done many times) elegantly reaches its climax in a powerful fire festival sequence that's somewhat clumsily referenced at the film's conclusion and the friendship and respect between Mifune and Susumu Fujita's enemy general (Fujita starred in Kurosawa's first film, Sanshiro Sugata, 15 years earlier), individuals on opposite sides of a war yet bound by a common class sense of honor and duty. Though there's a decent Criterion DVD of this, it really does need to be seen in a theatre for it to have it's full, populist entertainment effect.

2. Ivan The Terrible Part 2 - I wrote about this a couple weeks ago here. The second part of Sergei Eisenstein's planned trilogy about the first Tsar of Russia, this film was banned by Stalin (who felt its depiction of Ivan's use of a secret police to silence his political opponents was a bit too familiar) and not released until well after both Eisenstein and Stalin were dead. Abandoning his silent movie dialectical montage techniques, Eisenstein instead uses long takes, a distorted, artificial and grotesque mise-en-scène and acting styles to create a kind of feverish dream state, that only gets more bizarre halfway through the film when it all suddenly shifts from stark black and white to a vibrant bloody red pseudo-technicolor for a party sequence. Visually astonishing from start to finish, it is, it goes without saying, one of the minor crimes of the Stalin regime, but one of the great ones against film that Eisenstein never got a chance to finish his trilogy. 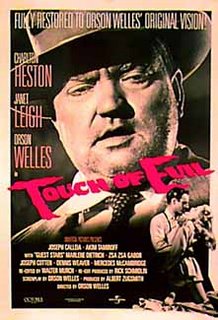 1. Touch Of Evil - One of my all-time favorite films is Orson Welles ultimate film noir. The film is generally used to mark the end of the classic periods of films noir, and in the same way Unforgiven (#1, 1992) represents the carrying of the Western genre to it's most fundamental extreme, so Touch Of Evil is the ultimate noir both stylistically and thematically. The most recent version of the film, re-edited in 1998 along specifications laid out by Welles and ignored for 40 years, the disconcerting style of the film becomes much more clear. Much of what was changed was an increase in intercutting between the various plotlines involving newlyweds Janet Leigh and her Mexican lawyer husband Charlton Heston ("He don't look Mexican"). The new version follows neither the original (which played each sequence to it's conclusion then moved to the next) nor the rhythms of standard police procedural intercutting, but instead leave everything slightly off-balance, all of which occurs after the famous opening shot, a long track from one border town to another. In other words, the continuity of the world is disrupted and thrown off balance by the explosion that gets the plot of the film rolling. Similarly, the framing, dialogue and casting are also off-kilter, bizarre (and hilarious) Marlene Dietrich playing a Mexican prostitute/fortune teller with a German accent, the aforementioned Charlton Heston as a Mexican symbol of the impotence, squareness and just plain lameness of the law, Dennis Weaver as the world's weirdest hotel clerk, and Orson Welles at his most grotesque as the fat drunk sheriff who likes to beat confessions out of the suspects he's framed. The film is endlessly fascinating thematically as a meditation on the nature of police work ("it should only be easy in a police state"). It's currently #5 on my ymdb Top 20 films list (link in the sidebar) and I could write pages and pages about it. "He was some kind of a man. What does it matter what you say about people?" Indeed.

A whole lot of Unseen movies from this year, Including films by Tati, Ozu, Malle and Wajda that I'd really like to see sometime soon. The version of Brothers Karamozov below stars none other than William Shatner as Alyosha, one of the greatest crimes a film ever perpetrated on a novel.


Mon Oncle
Elevator To The Gallows 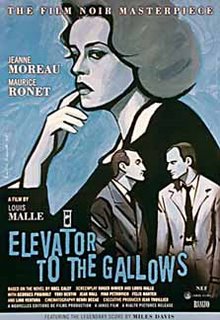 I Want To Live!
Equinox Flower
Party Girl
Ajantrik
Ashes And Diamonds
Curse Of The Demon
Man Of The West
Murder By Contract
Rock-a-bye Baby
Une Simple Histoire
The Tarnished Angels
A Time To Love And A Time To Die
Wind Across The Everglades
The Magician
Cat On A Hot Tin Roof
The Blob
A Night To Remember
The Fly
Fiend Without A Face
The Quiet American
The Naked & The Dead
Run Silent, Run Deep
South Pacific
The Defiant Ones
Bonjour Tristesse
The Brothers Karamozov
Posted by Sean Gilman at 3:10 AM 4 comments: