On The Spanish Earth 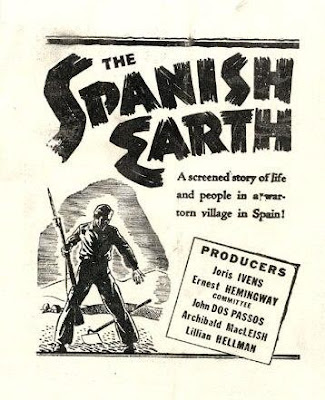 Is it just me or does the Hemingway narrator in everyone else's head always sound like Orson Welles?  Anyway, Welles narrates Hemingway and Jon Dos Passos's text in this documentary film, made in the midst of the Spanish Civil War by Dutch filmmaker Joris Ivens.  As if that wasn't enough star power, the musical score is by Marc Blitzstein (Cradle Will Rock) and Virgil Thomson, one of the first great American classical composers (along with Charles Ives, Aaron Copland and George Gershwin).  Thomson won a Pulitzer for his score to Robert Flaherty's Louisiana Story, and while this isn't that good (there's a lot of pastiche Spanishness to it, as opposed to Thomson's usual all-American style), it's still pretty charming.  The film is newsreel-style footage with sound effects and voiceover added later, but Ivens has an eye for striking images and some of his editing is quite clever (a particular cut from a gun firing to a hole of sunlight peeking through the crook of a soldier's elbow comes to mind). 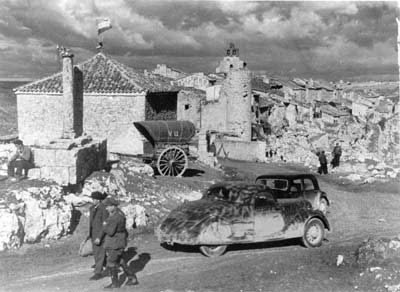 Set during the fascists' march on Madrid, the film splits the focus onto two stories, that of the capital's populace preparing themselves for the eventual attack (evacuating children, forming militias out of soccer players and bullfighters) and a nearby village's construction of an irrigation ditch to turn their unoccupied waste land into crops to feed the to-be-beseiged city. The script throughout is filled with pithy Hemingwayisms, sounding at times like the parody Hemingway in Woody Allen's Midnight in Paris.  My favorite: a post-battle riff on how sixes went out and only twos and threes came back.  The farm scenes are OK, but they pale in comparison to the similar construction effort in King Vidor's communitarian classic Our Daily Bread, released three years earlier.  Perhaps the final scenes of water flowing to relieve the parched Spanish earth (get it?) would have had a more triumphant effect if we didn't already know the ultimate fate of the Loyalists and those farmers.  Then again, that adds an unintentional poignancy to the whole film, and Vidor's communist farmers likely didn't end up much better off when McCarthyism and groups like Vidor's own Randian anti-Communist Motion Picture Alliance for the Preservation of American Ideals got ahold of them. 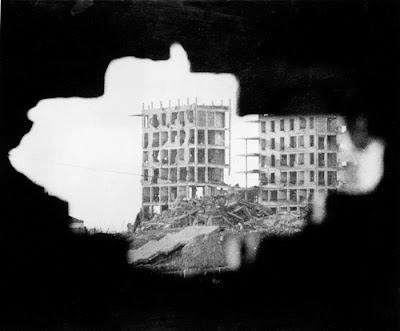 There's something that continues to fascinate me about this war.  Unlike the fascist takeovers in Germany and Italy, it wasn't a matter of an evil political party capitalizing on social conditions to get itself elected to power.  Unlike totalitarianism in France and Russia it wasn't the byproduct of a revolution corrupted by its own power.  Like many dictatorships, this one began with a coup, but only a partially successful one.  Instead of creating a military junta overnight, which could then proceed to its dastardly ends (purging the population, annoying and/or allying with US corporations, etc), the Spanish coup only managed to split the country politically in half, between the Monarchists and Fascists on the right and the Republicans, Communists and Anarchists on the left.  And so the war makes manifest, in a way no other conflict does, the divide between the political left and right in Western politics.  World War II, for example, wasn't a fight for Democracy against Totalitarianism, it was a fight against territorial aggression by rogue nations that happened to be totalitarian (with one of Democracy's key allies, the Soviet Union, being itself a totalitarian state).  But the Spanish Civil War was a real left vs. right conflict, where the political rhetoric of the most extreme elements of both sides for once became a reality.  The idea that these arguments between Left and Right really could degenerate into the kind of civil war Spain went through is an idea that seems wholly alien to us (though it can be found in many political films of the 1930s, particularly those of Frank Capra, which I think are greatly enhanced by seeing through the politics of the time, where Democracy was an existential choice and not merely a platitude), where our political parties throw around words like fascism and socialism with little regard to their actual meaning or their relevance to the people being so accused.  No one really believes Dick Cheney would organize a military coup to overthrow the elected government of the United States, nor does anyone serious believe that Barack Obama is plotting a government takeover of American industry or a mass collectivization project. 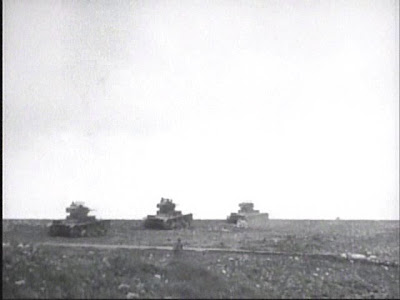 It is this seemingly obvious fact that Ivens's documentary makes clear to me: that this was a war fought by actual people who actually believed in and put into action the most extreme variants of modern political theory.  He focuses on the Left, the loyalist side with its poor folks banding together in a communitarian ideal to protect themselves from the invading fascists (helped, he repeatedly notes, by the foreign influence of the Germans and Italians, the assistance the Loyalist side received from the Soviets goes unmentioned), but in seeing those Loyalists as individuals, the fact that the fascists were also a mass movement becomes clear.  We don't see them in The Spanish Earth, I imagine Ivens would prefer to see the fascists not as individuals but as abstract forces of evil, but in their conspicuously off-screen existence, their presence, their threat, is inescapable.  Spain didn't have its democracy stolen, or totalitarianism imposed upon it: a sizable portion of the Spanish population wanted to live under dictatorship so much that they fought and killed and died for the right to create a fascist state.  I find that truth to be absolutely terrifying. 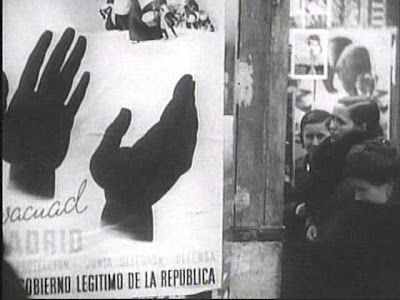 On a much lighter note, this was the first film my daughter watched, and she made it almost the whole way through its 55 minute runtime.  I don't know what exactly about it fascinated her so much, she usually prefers color images and flashier editing, and has very few interesting opinions on politics or history.  Maybe it was the score (she's heard a lot of Thomson over her 13 1/2 weeks of life), or maybe she just likes Orson Welles's voice (who doesn't?).  Regardless, she was rapt with attention until she slumped over asleep.  As far as she knows, the war had a happy ending. 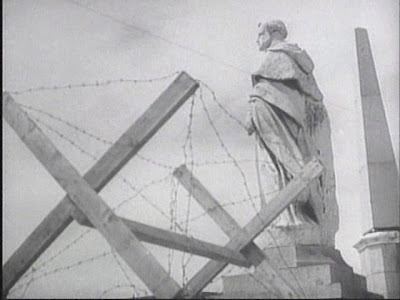 Posted by Sean Gilman at 5:54 PM No comments: