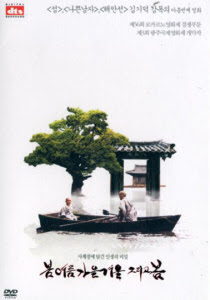 Trying to kill time while waiting for Metro Classics to get rolling (bring your friends!), here's a little roundup of the new films I've seen in the last week. Written while listening to Roger Ebert's commentary on the Criterion version of Ozu's Floating Weeds (#5, 1959). (By the way, it looks like Criterion's going to release Days Of Heaven (#1, 1978) this fall. At least, that's what their latest newsletter hints. I know I can't wait.)

Spring, Summer, Fall, Winter . . . And Spring - Mesmerizing Buddhist fable by Korean director Kim Ki-duk. On a small floating temple on a remote mountain lake, a monk raises a young boy. The five chapters follow five phases in their lives, as the boy grows up, fails to resist temptation, suffers and finally learns a bit about life, with some sex and self-immolation along the way. Shot amid beautiful landscapes, the film is chock full of the kind of symbolism that makes stoned college students rhapsodize incoherently til the wee hours of the morning (a different animal for each story, doorways without walls, long walks with a big rock, that kind of thing). Nonetheless, Kim directs with a light touch and the narrative never bogs down in inaccessibility or incomprehensibility. One of the best religious films I've ever seen, not least because of that humility. The #3 film of 2003.

Forty Guns - Barbara Stanwyck stars in Samuel Fuller's Western about a "high-ridin' woman with a whip". Three bounty hunter brothers show up in a small town in search of a fugitive, who happens to be one of the eponymous gunmen Stanwyck employs to run her cattle empire. The oldest brother (Griff, played by Barry Sullivan) also manages to start a feud with Stanwyck's little brother, who's rather psychotic. But, of course, Griff and Stanwyck fall in love, with unfortunate consequences for both of their brothers. The dialogue's got some famous double entendres, and Fuller uses the 'Scope frame well, with wide Western vistas and some tense showdowns. If any director was made for the Western, it was Samuel Fuller. The studio enforced ending is pretty hilarious too. The #8 film of 1957.

The Big Sky - Howard Hawks adventure/western that is generally highly praised though not in circulation (two facts which may or may not be related). The print TCM ran a few days ago was in pretty bad shape, hopefully someone will come along and restore it. Kirk Douglas and dewey Martin are young mountain men who join grizzled vet Arthur Hunnicutt on a keel-boat trip up the Missouri River to trade with the Blackfoot Indians. The plot's essentially similar to Hawks's own Red River, made a few years before, but it lacks that film's narrative tightness or the psychological complexity that film reaches in the father-son relationship between the heroic Montgomery Clift and the psychotic John Wayne. The film is notable for its sympathetic, and not entirely condescending, treatment of the Blackfoot, though both the Crow and Sioux are given the stereotypic movie-Indian role. Douglas, despite being the biggest star of the film, has been given the least interesting role, and doesn't do much with it beyond flashing his big grin. Hunnicutt is terrific, however, both as the sage Zeb Calloway and as the film's narrator. 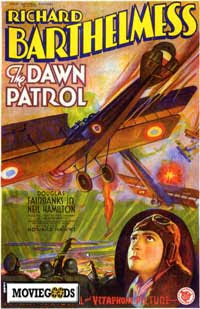 The Dawn Patrol - Also known as Flight Commander, Howard Hawks's first sound film sets the template for any number of aviation/war films that followed. Richard Barthelmess (Broken Blossoms, Only Angels Have Wings) plays the Captain of a WWI fighter squadron who's always at odds with his disintegrating commanding officer (Neil Hamilton) who's cracking up under the pressure of sending men off to die day after day. After directly disobeying orders and taking on a German airstrip (led by a thinly-veiled Red Baron) with only Douglas Fairbanks Jr to back him up, Barthelmess is promoted to flight commander as Hamilton is also promoted. And history repeats itself as Barthelmess begins to crack under the pressure. The flying scenes are very well done (I haven't seen William Wellman's Wings, from 1928, but this has to be state of the art for aerial photography). The acting is pretty good. A few of the minor roles are clearly played by people who still think they're in silents, and Barthelmess can be a bit overexpressive at times, but he and Fairbanks are generally pretty good.

Rio Lobo - Howard Hawks's last film is yet another reworking of the basic premise of Rio Bravo, but whereas he arguably improved on that great film with El Dorado, this is more of a dud than anything else. During the Civil War, John Wayne learns there's a traitor in his troop. After the war, he teams up with some clever soldiers from the other side to track don the traitor, who happens to be part of a gang terrorizing the village of Rio Lobo. Wayne and the two men, with the help of some local girls, take on the bad guys and save the day. It's not a bad film, but it's certainly worse than the other two versions, and it's got the most mediocre cast (Jack Elam and Jennifer O'Neill are no Robert Mitchum and Angie Dickenson). The #8 film of 1970.

Knock On Any Door - I missed this in the last roundup, I think, but this Nicholas Ray courtroom drama is a pretty mediocre addition to that genre, with a lackluster Humphrey Bogart performance as a lawyer defending a juvenile delinquent from a murder rap. Turns out the slums forced John Derek to be a petty thief and copkiller, at least that appears to be Bogart's argument. It's all a little more complex than that, and nothing shot by Ray can be without interest, but there's not much of a story here.

Wuthering Heights - William Wyler's adaptation of the Emily Brontë classic stars Laurence Olivier as the stable boy turned angry young gentleman jerked around by Merle Oberon's crazy Cathy, who's torn between sex with Olivier and money with David Niven. Perhaps as is necessary with an adaptation of such a famous book (which I've never read) the whole thing feels extremely rushed (every conversation is about Heathcliff, it's like these people have nothing else to talk about). The Cathy character, in particular, seems underwritten. There's no explanation for her radical changes of mood from scene to scene, the only explanation I'm left with is that she's totally insane, which I guess works because Heathcliff's stalker stable boy isn't exactly Mr. Rational. The sexual psychology is cheap and obvious (Penistone Crag? Seriously??) Gregg Toland's cinematography is quite nice though, tracking deep-focus shots and all that, but he did better with Welles and Ford. The film's alright, but I don't get its enduring reputation as a great film. 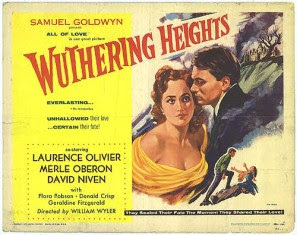