Running Out of Karma: The Eighth Happiness 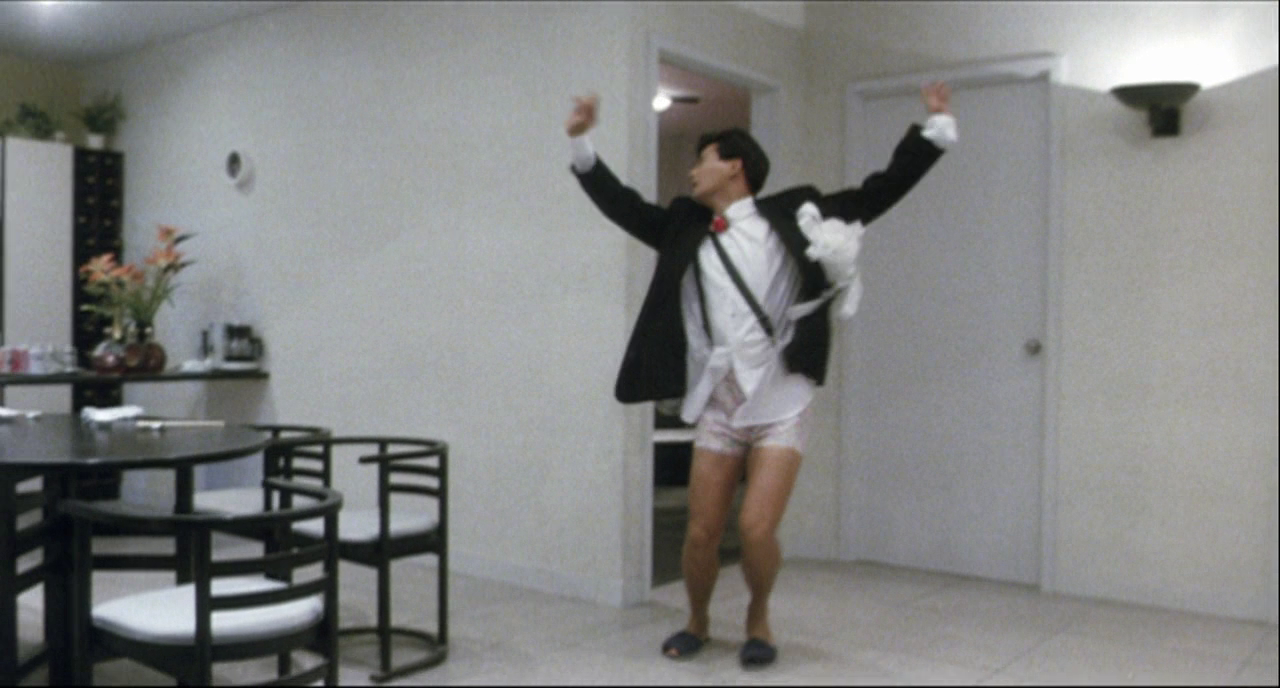 When I started this Running Out of Karma project 53 weeks ago, the intent was to go through each of Johnnie To's films in chronological order, tracing his career as it developed with equal attention paid to his early and late films, his comedies and action dramas. As To's career is intricately woven through the past 40 years of Hong Kong cinema, I knew this would lead to many tangents and side trips as I explored not just his films, but their context as well. I'd have to familiarize myself with his contemporaries as well as their influences. But the intention was to maintain the chronological To as the spine of the series. But it hasn't really worked out that way.

Since the project began, I've watched somewhere in the neighborhood of 175 Chinese-language films,  from 1939's Empress Wu Zetian to 2014's The Midnight After, with extended forays into the work of King Hu, Lau Kar-leung and Tsui Hark, but I've only written about six Johnnie To films: the first three (The Enigmatic Case, Happy Ghost III and Seven Years Itch) and the most recent three (Drug War, Blind Detective and Don't Go Breaking My Heart 2). The one that had me stumped was his fourth film, The Eighth Happiness.

Following up on the Cinema City romantic comedy Seven Years Itch, To re-teamed with producer-writer-star (not necessarily in that order) Raymond Wong Bak-Ming for an ensemble film designed for release during the Lunar New Year holiday, a week-long (more or less) celebration that is the highlight of the Hong Kong film release calendar, when all of the big, star-studded blockbusters hit theatres. Wong plays the eldest of three brothers, each of whom will have a series of romantic misadventures. Chow Yun-fat, at this time the biggest star in the colony, hot off the smashing success of A Better Tomorrow, plays the middle brother while pop star Jacky Cheung, himself on the road to a successful film career (he'd win the Supporting Actor Hong Kong Film Award this year for his work in Wong Kar-wai's debut feature As Tears Go By), plays the youngest. 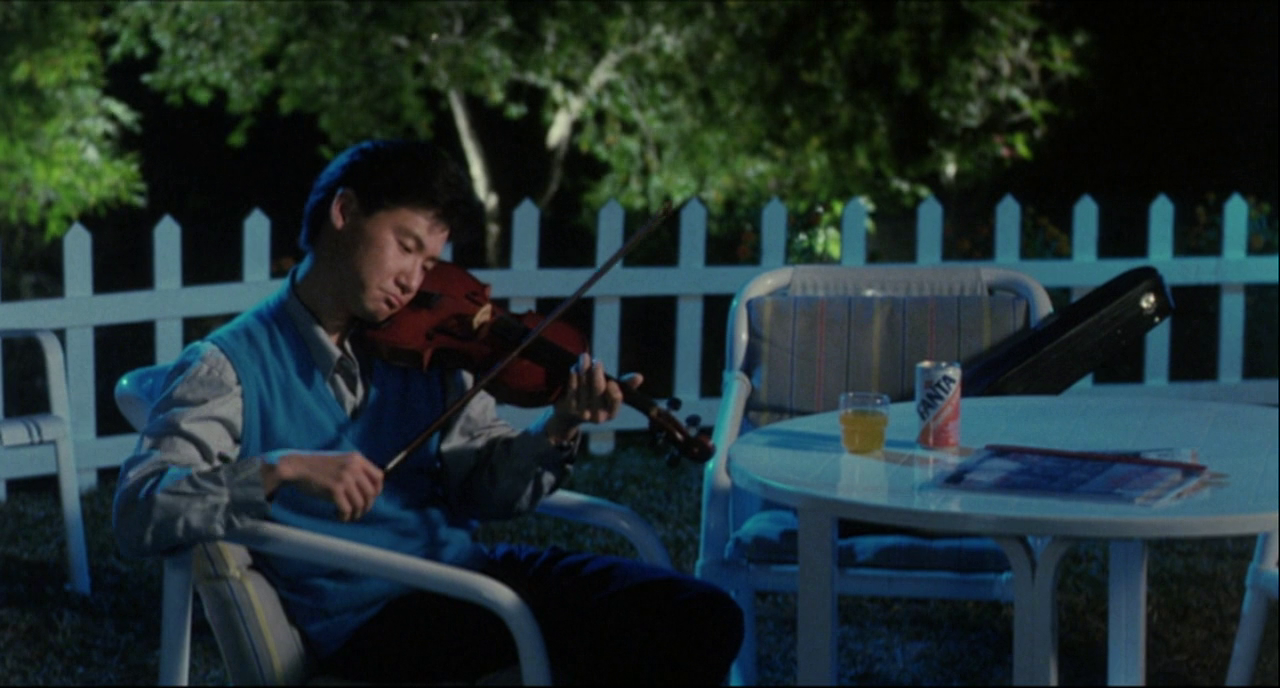 Cheung's story is the cutest and the briefest: first he's mistaken (a couple of times) for a sexual predator (he isn't), then he has to stand up to a Ping-Pong bully in order to win his girl. It's mostly innocuous and easily forgettable, but for Cheung's mid-plot scene of sadness, playing the violin to a half-empty glass of Fanta. Most likely much of his story was edited out, including a thread about his career as an aspiring cartoonist, which we see the resolution of at the climax, the first time it is mentioned, a hint of the slapdash approach to story that characterizes much of the film, apparently To and his actors improvised a lot, basically making it up as they went along. This is far from the highly controlled and determined feel of To's Milkyway work, with intricately designed plot structures and purposeful images, though I imagine the freewheeling, collaborative element still survives in the joint writing process that occurs before filming begins, leading many of the later films to be credited as much to "the Milkyway Creative Team" as to any single screenwriter. 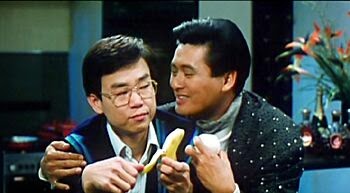 Playing the most subdued and "normal" brother, Wong works as a television host of some kind, doing interviews and cooking segments and financially supporting his siblings in a palatial (by Hong Kong standards) house. He meets a woman who performs Cantonese opera whose husband has recently left her and her son. The have a romance that might have been sweet, but before it is crushed by the chaos created by his brothers, Wong has managed to make himself as unlikeable as any of the more obviously cruel figures in the film. The big date we see them go on is to a Raymond Wong film (Papa, Can You Hear Me Sing?, I believe) the sight of which brings them all to tears (it's a melodrama, he curses the filmmaker (which was him) for making it so sad) and he spends most of the evening asking the weather to intervene so he can sleep with the poor woman. She ditches him when she learns that he and his brother are the ones that have been prank-calling her every night for months. Which leads us to the third brother, played by Chow Yun-fat. A flamboyantly fabulous sociopathic womanizer, Chow relentlessly pursues an equally amoral shopgirl played by Cherie Chung. He's also engaged to a very nice and very forgiving flight attendant played by Do Do Cheng. We hear Chow, in voiceover, explain his seduction technique (he plays the "sissy" or as one subtitle translation spelled it, the "cizzy") as one of disarming women with his femininity so they're more trusting of his advances, as well as its origins (he blames Wong for "making him wear dresses" as a young child). The implications and stereotypes of Chow's performance are simply too dense for me to unpack, and I've watched the movie three times and had a year to think about it. I simply don't know if it's good or bad. It's appallingly broad and offensive, but quite obviously intentionally so. I've never seen anything like it before or since. But he is the essential figure, both in the plot (it's his anarchic actions that complicate and resolve his brothers' romances) and in the film's appeal. You can't look away from him whenever he's on-screen, despite the utter awfulness of everything he does. It's not just a performance in bad taste, it's a performance utterly liberated from any idea of what taste is. The freedom it represents, the freedom to be truly, deeply horrible, is what makes the film some kind of great. Early in the film, Chow dances half-dressed in tuxedo shirt and jacket, no pants, suspenders slung bunched over one shoulder (as he will wear them throughout the film) to an electric Cantonese variation on the Blue Danube Waltz and it's as pure an expression of joy as there is in film history. 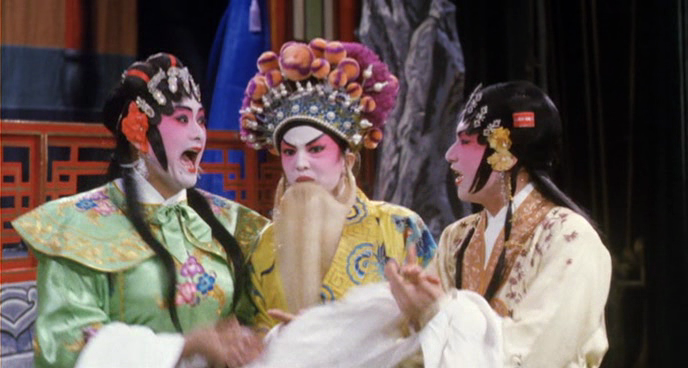 The film's conclusion seems an obvious nod to Tsui Hark's Peking Opera Blues, with most of the main characters on-stage in full Cantonese Opera dress singing the plot resolution (Wong apologizing to the woman he loves) while the audience (featuring cameos from Karl Maka, John Sham and Ringo Lam, among others) howls with laughter. The most interesting part of the movie though comes shortly after, in a short epilogue. Chow and Cheung live happily ever after with their girls, but right after the show we've just seen, Wong's woman's husband (Teddy Robin Kwan, naturally) returns and she runs off with him. Leaving Raymond Wong sad and alone and completely nullifying any sense of resolution that came from the film's climax, rendering pointless its entire plot. And then the whole cast gathers to wish us all a Happy New Year. It's glorious. 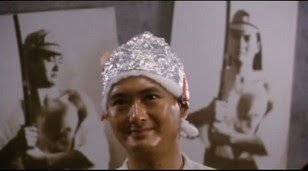 I suspect it's Chow's performance that made the film such a hit. To see the stoic and dignified Chow, the elegant romantic hero of soaps both on TV and in film as well as the iconic gunman of so many John Woo and Ringo Lam pictures act like a demented loon is undeniably appealing. The film was the first big hit of Johnnie To's career, topping the Hong Kong box office for 1988 (a feat he and Chow would repeat the next year with All About Ah-long). It still might be the film To is most famous for among Cantonese audiences, helping to usher in a wave of imitators that is still on-going, most notable the Alls Well, Ends Well series that began in 1992 under the direction of Clifton Ko (who directed the first two Happy Ghost films for Raymond Wong) and which continues into the present, the latest entry being released in 2012. The first one at least is pretty good, with some great work from Stephen Chow. Wong Jing's parodic inversion of the formula, 1993's Boys Are Easy is also pretty special. There will be much more about Chow Yun-fat, Wong Jing and Stephen Chow as  this series rolls along, as Johnnie To's career will be heavily intertwined with theirs for the next five years. But this is pretty much it for Raymond Wong. 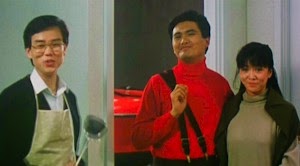 Posted by Sean Gilman at 9:55 AM No comments: