Trying not to fall behind again, here's the last few movies I've watched.

300 - Going in I figured it would either be really great or really terrible, but definitely nothing in between. I was sort of right: it's both really great and really terrible. Over the top across the board, which works great for the action scenes and the general Spartan speechifying. But there's way too much of the Queen's actions on the homefront, trying to rouse the Spartan Council to war despite the evil presence of Jimmy McNulty. Any attempt to look at the film as a political statement is bound to end in fascism or worse. Let's be kind and just call it politically irresponsible. Several images though, lifted straight from Frank Miller's graphic novel, I understand, are breathtaking. Gerard Butler, as the King Leonidas is surprisingly good in a role that basically requires him to cause mayhem, shout and look at the sun. Rodrigo Santoro is simultaneously awesome and hilarious as Xerxes. And, hey, Faramir's there too!

Abraham Lincoln - Well, that didn't really help. I was trying to erase thoughts of DW Griffith's paean to the KKK by watching this, which I'd heard some good things about. It's a fairly conventional biopic, and Griffith pretty much entirely avoids the subject of slavery entirely: the cause of the War comes down to Walter Huston repeatedly glancing skyward and in a stentorian tone announcing that "The Union must be preserved!"

Visually, it's obviously an early sound film. The sound quality was really terrible and the camera hardly ever moves (early sound cameras were to big to float around in the ways they did in the late silent era). Griffith manages to condense Lincoln's entire life to an hour and a half, mainly by structuring the film as a collection of short scenes connected by fades. Lincoln rarely has anything more to say on an issue than a sound bite or a short folksy anecdote. Lincoln's most famous speeches are elided together or eliminated altogether: the "House Divided" line is inserted into the Lincoln-Douglas debates (which consist of, IIRC, 6 total lines), "Malice toward none and charity toward all" from the second inaugural is moved to some remarks before Our American Cousin starts (along with the final lines of the Gettysburg address). The War is nothing but crushing defeats, until suddenly the North wins.

It's better than BOAN in that its not actively evil, and there are some very nice framings. But Griffith's silent work was all movement and kineticism, both in camera and in editing. This film just kind of sits there. 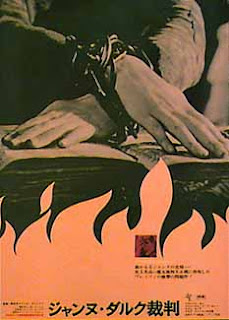 Le Procès de Jeanne D'Arc - Robert Bresson's film of the trial of Joan Of Arc is a fascinating contrast to Carl Theodor Dreyer's The Passion Of Joan Of Arc because passion is exactly the thing that Bresson attempts to remove from all his films: the kind of actorly emoting that tells the audience how to feel that is so powerful in the close ups of Maria Falconetti's performance in Dreyer's film is entirely absent from Bresson's. Bresson uses the actual transcripts of Joan's actual trial to tell a short story (only 68 minutes) that is exactly what the title proclaims it to be and nothing else. Florence Delay (perhaps the cutest Joan yet, maybe too cute) says her lines with the total lack of emotion Bresson demanded from his non-actors, unlike the intense performances Flaconetti and Milla Jovovich (in Luc Besson's underrated The Messenger) have given in the role. not as powerful as the other Besson's I've seen, but I think that's largely a matter of the familiarity with the subject matter and the literalness of the film. Au Hasard Balthazar and Diary Of A Country Priest and even Pickpocket are open-ended narratives that leave the question of if the story is an allegory and if so, about what, up to the viewer. In Le Procès, the mystery is in the historical events, less so the film. The #5 film of 1962.

The Slow Century - Rock documentary about the band Pavement that's fairly conventional as these things go. You don't really learn anything about the band that you couldn't learn listening to the albums and reading their Wikipedia entry. the film is largely valuable for an extensive collection of archival footage of the band's performances, especially their early, chaotically messy shows. The #22 film of 2002.

The Missouri Breaks - Weird Western directed by Arthur Penn (Bonnie & Clyde, The Left-Handed Gun) and starring Marlon Brando, Jack Nicholson, Randy Quaid and Harry Dean Stanton. Nicholson, Quaid and Stanton are a gang of horse thieves in Montana and Brando's the crazy guy who gets hired to hunt them down and kill them. The film never seems to decide if it wants to be serious (Stanton, various speeches about the morality of capital punishment) or comic (Brando's overthetop wackiness, the jaunty score) or something in-between (Nicholson and Quaid). The result is a disjointed mess of a film that never feels right. It's more jarring than interesting. The #11 film of 1976. 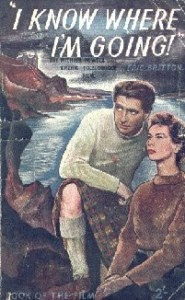 I Know Where I'm Going! - Another low-key romantic masterpiece by Michael Powell and Emeric Pressburger. Wendy Hiller plays a determined golddigger who gets stuck by a storm an island away from her wedding in the islands off the Western coast of Scotland. There she meets Roger Livesey, a naval officer on leave and resident of her destination island. Thanks to some traditional Scottish culture, a bit of superstition, some magic an uncooperative eagle and a very bad boat trip, they, of course, fall in love. Not as successful as the very similar A Canterbury Tale at building a romantic, quasi-mystical epiphany out f the mundane details of country life, but still a terrific film.

I think I've seen all the most important Powell and Pressburger films now. They're all oustanding, but here's my ranking: