The further we move back in time, the more stratified the movies I've seen become. Generally there will be a bunch of great, classic films at the top of the lists, and a few mediocre at best movies at the bottom that I watched as a kid (thanks Disney Channel, ugh.) That isn't the case this year, when pretty much all of the movies are pretty good. 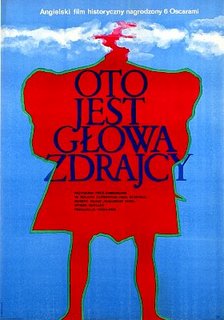 14. Winne The Pooh And The Honey Tree - The first Disney Pooh film, it's much the same as the others, only a little worse. I believe this film was instrumental in the development of my intense fear of bees. Did I mention The Tao Of Pooh is a great book?

13. A Man For All Seasons - Paul Scofield is one of my favorite actors, I especially like his performance in Quiz Show (#3, 1994). He won the Best Actor Oscar playing Thomas More in this film, and while he's very good, it wasn't enough for me to really like the film. There's a real overblown 1960s Hollywood vibe to the film that I found very off-putting, and when I saw it, on VHS, it looked to be a pretty ugly, all the bad things about Technicolor, kind of film. I probably need to watch it again, there are too many people I like involved in it for me not to like it. Orson Welles, John Hurt and Robert Shaw star and Fred Zinneman directs Robert Bolt's screenplay.

12. Hunger - My favorite discovery in my Scandinavian Film class (yeah, it was as dull as it sounds) was this film and novel. Both the film and the book are about a struggling writer who wanders the streets of Christiania being, well, hungry, largely by choice. It's a very weird movie of a very weird book. The film was directed by Henning Carlsen, who doesn't appear to have done anything else I've ever heard of. Knut Hamsun wrote the novel, he was recently the subject of a long New Yorker profile.

11. Fahrenheit 451 - Another film I watched in class, this time in a crappy Communications 101 course. François Truffaut's adaptation of the Ray Bradbury novel stars Oscar Werner and Julie Christie. The plot should be familiar: at some point in the future, books are banned and firefighters run around rounding them up and burning them. Werner plays a fireman who has some doubts about whether or not this is a good idea. Another movie I should see again, but I'm wrong about this not being a great film. 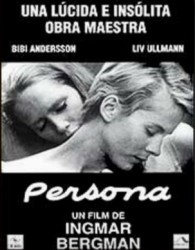 10. Persona - The movie that turned me off Bergman, whether that his fault or mine I will leave as an open question. Bibi Andersson plays a nurse taking care of a mute actress (Liv Ullman) in some remote place in the country. Gradually, the two women begin to merge into the same person. This is the movie people who hate of foreign art movies are thinking of when they make fun of them. Since it was over a decade ago that I watched this, I intend to give it, and especially Bergman another try. This seems to be a theme with the bottom half of this list. With so many movies to see once, how will I ever find time for all the ones to see twice?

9. How The Grinch Stole Christmas - Hayao Miyazaki may be the trendy pick, but I've no doubt that Chuck Jones is the greatest animation director of all-time. This is his most famous non-Looney Tunes film, an adaptation of a Dr. Seuss book. If you haven't seen it, I congratulate you on waking from your 40 year coma. Welcome to the world of the mobile! I am honored you choose this blog as your initial foray into the modern world. Now, go watch this movie.

8. It's The Great Pumpkin, Charlie Brown - It's a tough call on which is the best Peanuts film, but it's either this one or the Christmas one. I'd say Christmas is the better film, while this one is my personal favorite. Let's just say I can relate a lot more to the idea of faith expressed by Linus in the pumpkin patch than I can by his speech for the Christmas play. Plus it's got one of the greatest and most resonant lines in all of film history: "I got a rock."

7. Who's Afraid Of Virginia Woolf? - This film of Edward Albee's play is perhaps the meanest movie I've ever seen. Richard Burton and Elizabeth Taylor are at their best as a vicious old married couple who torture each other and their young dinner guests over the course of one awful evening. George Segal and Sandy Dennis play the clueless young couple, Mike Nichols directs (it was his first film) and Ernest Lehman wrote the screenplay. Lehman has a bizarre list of credits: North By Northwest, West Side Story, The Sound Of Music, Sabrina, The King And I, Black Sunday, Sabrina, Family Plot, Hello Dolly! and The Sweet Smell Of Success. 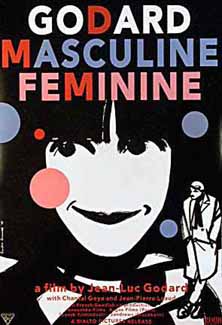 6. Masculin Féminin - Young, pretty, disillusioned French kids awash in consumerism, Americanism and the stirrings of the 60s cultural revolutions in pre-1968 Paris. It's Jean-Luc Godard midway between his more politically explicit films of the 70s and his early chaotic, fun and romantic films. Jean-Pierre Leaud (from the 400 Blows and other Truffaut films) and Chantal Goya (who was a pop star in France at the time) are the lead actors, but as always in his films, Godard is the star.

5. What's Up, Tiger Lilly? - Back in the dark ages before Woody Allen invented the modern romantic comedy, before he began dissecting and satirizing the New York upper class much to their delight, before he became the most improbable sex symbol in film history, he took a cheap Japanese James Bond rip-off called "International Secret Police: Key of Keys" and redubbed all the dialogue to create a comic masterpiece, a defining post-modernist film and what is perhaps the funniest movie in his long career. The star, Tatsuya Mihashi was also in The Bad Sleep Well and Inagaki's version of the 47 Ronin, Chushnigura.

4. The Battle Of Algiers - Strikingly realistic seeming film about the war between, for want of a better word, terrorists and the military in French-occupied Algiers in the 1950s. Storywise, it's essentially an epic police procedural, and like all great procedurals, it's fascinating in it's depth and detail, both in describing the tactics of the army and the terrorists. The films sympathy pretty squarely lies with the anti-colonial side, though it stops short of actually condoning their tactics. It's a more nuanced and interesting examination of the political relationship between the West and Islam than would seemingly ever be made nowadays, unfortunately.

3. The Sword Of Doom - An amazing movie, one of the darkest action movies I've ever seen, and the best non-Kurosawa samurai film. Tatsuya Nakadai plays a truly evil swordsman, walking the earth in search of more evil to do. The first thing he does in the film is cut an old man in half for no particular reason, and he only gets worse from there. Toshiro Mifune has a small role as a fencing instructor and he also gets one great action sequence. This is one of the all-time great film endings, wholly by accident, I guess, as this was supposed to be only the first part of a trilogy. A beautiful black and white film, directed by Kihachi Okamoto, who also directed Nakadai in the Sanjuro remake Kill! (#6, 1968).

2. The Good, The Bad & The Ugly - The third part of Sergio Leone's Man With No Name Trilogy is perhaps the greatest action movie ever made. It's certainly one of the prettiest. It doesn't have the same resonance as his Once Upon A Time films (In The West, #3, 1968; In America, #7, 1984), but it's still an ambitious, epic film. The story couldn't be simpler: three outlaws each know one third of the secret of where some buried treasure is located. All three hate and mistrust each other, but no one can get the treasure without the other three (sounds like some game theory scenario). But, this being a Sergio Leone film, the joy is not in the plot, but in the slow, grand, sweeping unraveling of that story, building tension past all reasonable expectations until the final paroxysm of violence. The three leads have become iconic: Clint Eastwood, Lee Van Cleef and Eli Wallach. 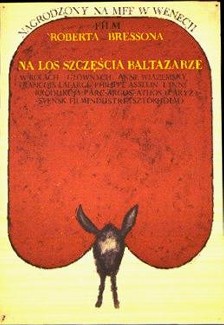 1. Au Hasard Balthazar - The simple story of a girl and her donkey, Robert Bresson's masterpiece may be a trendy film geek favorite, but I love it nonetheless. It's basically a biopic about a donkey, we follow Balthazar from his birth and idyllic childhood on a farm, his separation from the girl he loves, the varying degrees of mistreatment he receives as he passes from one owner to another (somehow always finding his way back to the girl). Paralleling Balthazar's story is that of the girl, a fairly stupid, self-destructive kid who constantly makes the wrong choices. Also along for the ride are the girl's father, an absurdly stubborn man who loses everything in a near-unbelievable attack of stubborn pride, and a young hoodlum who owns Balthazar for awhile and dates the stupid girl. Most people will claim the film is an allegory for something or other, usually whatever religion or philosophy they already happen to have. That's what makes the film so unique: it can mean literally anything and everything. The simplicity of the story, the blankness of the acting (a Bresson trademark), the near invisibility of the visual style and score (though both are beautiful) create a blank slate of a film which the viewer must then give some kind of larger meaning (much like life? nah).


Some interesting Unseen films from this year: classics from Swinging London, pseudo-New Wave French films, Howard Hawks's remake of his own Rio Bravo, and Tokyo Drifter, by Seijun Suzuki, none of whose films I've seen, but I plan to in the near future.

Manos: The Hands Of Fate 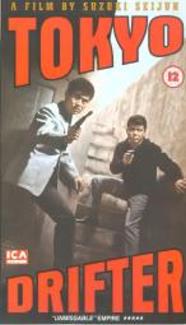