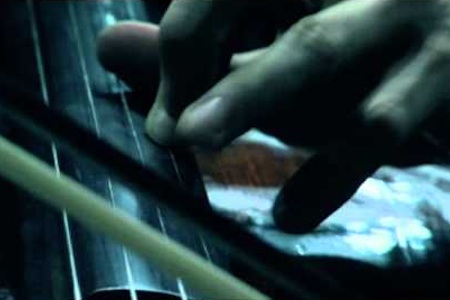 The third of director Phil Grabsky's biographical documentaries of famous composers is about as good a film about Joseph Haydn as you're likely to see.  Unlike the subjects of his first two films in the series, Mozart and Beethoven, Haydn doesn't have a particularly interesting biography, nor does his music have as ubiquitous a presence in modern life. In fact, his life can be downright dull at times: he seems like a basically decent guy, though not exceptionally so, who was well-employed for most of his life and achieved great success and renown for his work.  Basically the opposite of our ideal tortured artist.  Musically, he appears to be more respected by professionals than loved by the general populace; his name is probably more famous than any of his tunes.

The great strength of Grabsky's Beethoven film (I haven't seen the Mozart film yet) was its emphasis as much on the music as on the biography: he has a knack for getting inside the music and showing what is really unique, interesting and powerful about it.  To that end, Haydn presents a bit of a dilemma in that he just wrote so much music: over 100 symphonies and string quartets each, along with operas and keyboard music and more.  Trying to cover it all in the film's less than two hour running time is next to impossible.  Still, Grabsky does get some fine commenters (Emmanuel Ax and Marc-Andre Hamelin in particular) to explain in lay terms just how experimental and unusual Haydn was, and why he was to be such a huge influence on every composer that followed him, Mozart and Beethoven first among them.

The best parts of the movie are the performances.  Not just for the music itself (by the Orchestra of the 18th Century and the Endillion String Quartet, among others) but for the way the film captures them.  There are the standard, Great Performances-style long shots, of course, but Grabsky also frequently intercuts extreme close-ups of the musicians at work: say, the fingerboard of a cello or the strings of a violin.  The performance is broken down to its most basic elements, made physical and tactile.  Music can be so ephemeral, so abstract that grounding it in this way reminds us of its tangible reality, that it is created and performed by people on instruments.  To often music, classical music in particular, is treated as if it were an emanation from on high, divinely inspired by "genius" as a gift to all humanity.  Grabsky's project is to fight that rarefying impulse, to root the music in the people who wrote it and, just as importantly, in the people who perform it.
Posted by Sean Gilman at 3:38 PM No comments: 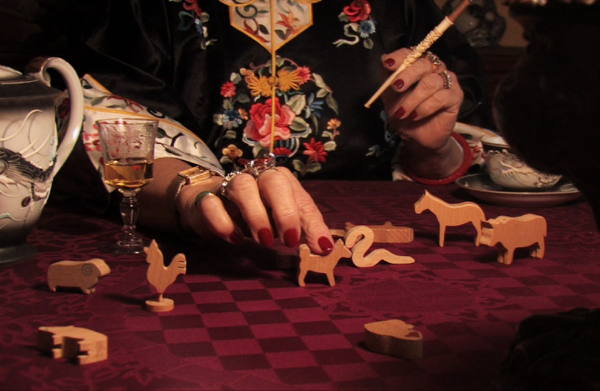 Directed by the Portuguese pair of João Pedro Rodrigues and João Rui Guerra da Mata, The Last Time I Saw Macao is an enveloping blend of essay film and film noir, of the film maudit Macao by Josef von Sternberg (who was fired and replaced by Nicholas Ray during shooting) and Chris Marker's meditation on time and place Sans Soleil.  Guerra da Mata plays himself as the main character though we never actually see him, just a stray arm or hand.  It's not shot in the first person, he just exists somewhere off-screen telling us the story in narration.  In fact, no one on screen ever actually speaks: all the voices we hear are either off-screen or lip-syncs.  The film begins with just such a performance, a drag queen performing a lip-sync to Jane Russell's "You Kill Me" from Macao.  Later, we learn that this same performer is an old friend of Guerra da Mata's, and he's been summoned back to Macao, the former Portuguese colony in China where he was born and grew up and which he hasn't been back to for many years, in order to help her out of some kind of jam: lives are in danger.

Much of the first half of the film follows Guerra da Mata as he revisits locations he remembered from childhood: his old school, a colonial government building, etc while he muses on the history of the city and its unique place between two countries (though governed by Portugal for hundreds of years, the two cultures never mixed, he doesn't speak Chinese and can't find anyone who speaks Portuguese).  The images the two directors capture of the city evoke this alien, "singular and bizarre" world, a city where even the TV is upside down, where a casino employs a Chinese gondolier who sings Charlie Chaplin's "Smile" while he works.  Slowly, the mystery plot reveals itself, but Guerra da Mata tends to get sidetracked in digressions about the city, just as every time he is supposed to be at a certain place at a certain time to meet someone, he ends up getting lost.

Like Godard's Alphaville, this unsettling modern landscape forms an ideal backdrop for a noir tale, one involving an underworld gang, the Chinese Zodiac, and a birdcage recalling the Great Whats-it from Kiss Me Deadly that can turn people into animals that ends with a man running at night through the labyrinthine city while fireworks explode (a climax reminiscent of Dead Men Don't Wear Plaid, or the film it borrows from, The Bribe).  The next morning's epilogue finds the city enveloped in an apocalyptic smog.  This intersection between silly city symphony and Hollywood hodgepodge, between travelogue and film noir, between essay and pastiche forms a liberating kind of cinematic world: one where anything is possible because everything is constructed: reality is fiction and vice versa.

One way to take this is as a story of Chinese Macao descending into a primitive, animalistic hellscape once the Europeans abandon the city.  A better way is as the story of a European explorer who keeps getting lost, leaves a trail of dead bodies behind him, creates an environmental apocalypse and then disappears, allowing the original, enduring culture to return to prominence.  Beneath the ephemerality of modernity, its casinos and showtunes and movies, lies an ancient, foundational, unknowable humanity.
Posted by Sean Gilman at 2:56 PM No comments: