Movie Roundup: Down With Portugal Edition 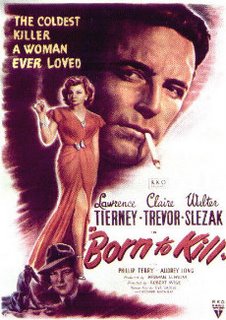 It's hard to get excited about Independence Day when the last book I read was Lies My Teacher Told Me and I'm currently enmeshed in The People's History Of The United States. All those slave-owning, Indian-killing, rich white men revolting against one tyranny so they can inflict their own on the native and slave populations of an entire continent? Bleh.

Born To Kill - Yet another Claire Trevor movie. This time, she plays a recent divorcee who becomes the object of obsession of a sociopathic killer played by Lawrence Tierney, who you'll recognize from his performance as the gang leader in Reservoir Dogs (#2, 1992). Tierney, on the run for a murder in Reno, tries to get closer to Trevor by marrying her adopted sister, a rich heiress. Trevor's got her own racket going as she's trying to marry a rich guy for his money, but is secretly having an affair with Tierney. The body count piles up as they realize a private detective is on their trail. And somewhere in there, the great Elisha Cook Jr shows up as Tierney's best friend. Directed by Robert Wise, it's not as good as his The Set-Up, but it's still a fun, twisted little noir.

Nacho Libre - As has been said elsewhere, your enjoyment of this film depends entirely on whether or not you think the idea of Jack Black as a no-talent Mexican wrestler is funny. Since that's the only joke in the film, and I think it's mildly amusing, I found the film itself to be mildly amusing. A matter of too many chefs, perhaps, with the director of Napoleon Dynamite, the writer of School Of Rock and Jack Black's camera-hogging mugging all fighting for apparent creative control of the film, it just ends up a mediocre mess. 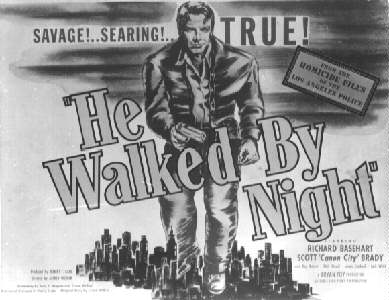 He Walked By Night - This b film marks the intersection of the film noir and police procedural genres. When they reviewed it a couple weeks ago, the great noir podcast Out Of The Past seemed to be crediting with inventing the whole police procedural genre, which it didn't, of course. If nothing else, Fritz Lang's M from 1931 has many of the elements you look for in the genre, as well as being an early noir. Anyway, He Walked By Night's main claim to fame is being the inspiration for the radio and TV series Dragnet, and thus every cop and detective TV show from the last 50 years (combine Dragnet and Perry Mason and you get Law & Order; CSI is actually very close to He Walked By Night, focusing as the film does on the new technologies of police work in the post-war period.) Jack Webb, the creator and star of Dragnet has a small but memorable role as a technician, one of the boys down at the crime lab. None of the other performances are remarkable, but the direction, by an uncredited Anthony Mann and the cinematography by John Alton is as good as any of their other work.
Posted by Sean Gilman at 3:29 PM No comments:

The Major League Baseball All-Star teams were announced today. Predictably, they screwed everything up. One of the fun things about being a baseball fan is bitching about the All-Star selections, which are invariably idiotic. In that spirit, I offer my own choices for the game, to be played a week from now. The guiding principle is the one espoused by Baseball Prospectus (see the link in the sidebar) writer Joe Sheehan: if you would feel stupid picking a player for the All-Star game in February, he's not an All-Star in July. A good three months does not an All-Star make: the game is to reward and highlight the best players in the game, not the one's with the best first half of a season. I'm also following the one All-Star per team rule.

Mike Hargrove is so obviously mind-numbingly stupid the universal outrage of Mariner fans has caused USSMariner to crash. I want to get excited about this team, it has played so well for the last month, but with him at the helm, only excruciating disaster can be expected.