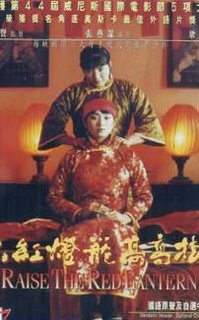 Been reading a number of movie books lately. I reread Jonathan Rosenbaum's Movie Wars, much of which was quickly outdated by the DVD/Netflix phenomenon in the five years since it was written. I've been making my way through Phillip Lopate's Library Of America Anthology of American Film Critics, which has it's flaws but is still pretty interesting (in addition to it's having the first Manny Farber and Andrew Sarris I've been able to read). In the mail today came Movie Mutations, an anthology of essays on contemporary world cinema edited by Rosenbaum and Australian film critic Adrian Martin. Can't wait to read it.

Raise The Red Lantern - Period melodrama starring Gong Li in which she's the newest of four wives for a castle-dwelling fellow in 1920s China. Like every other Zhang Yimou movie I've seen, the film is beautiful: vibrant colors, with a very structured, composed mise-en-scène, which, combined with the length of the shots and the slow pace of the film effectively inspires a sense of restriction and entrapment. Whether this atmosphere is a subtle condemnation of life in totalitarian China or simply an evocation of the unfortunate circumstances the hero finds herself in is a matter of opinion. I think Zhang's a lot more ambivalent politically than his Western admirers like to think he is, but I haven't seen enough of his early films to say for sure. The #8 film of 1991.

The Black Dahlia - Brian DePalma's a hack. This mishmash of Hitchcock and noir and the true story of a grisly murder is an incoherent mess, both in terms of a nonsensical plot, absurd, motiveless characters and a visual style that's a nonsensical collection of shots from other, better movies. The Out Of The Past podcast (see the link in the sidebar) devoted their last episode to this travesty, and did an excellent job explaining the many ways it goes horribly wrong. It's part of DePalma's "style" to ripoff shots and scenes from other scenes and insert them willy-nilly into his own films, and the OOTP guys go into detail on how this radical decontextualization creates an incoherent mess of a film that can't possibly contain any actual meaning, at best, and at worst perverts the original meanings to DePalma's vaguely fascist (or misogynistic, if you like) purposes, as in the famous appropriation of the tumbling baby cart sequence in The Untouchables. Worth seeing for those who like train wrecks. 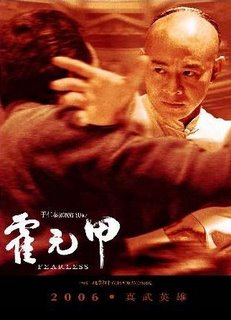 Fearless - In supposedly his last major role as a kung fu star, Jet Li reprises just about every other kung fu hero he's ever played in this mildly interesting film directed flashily by Ronny Yu (The Bride With White Hair). Li plays a cocky young man who experiences a tragedy that forces him to grow up. he retreats for a time and achieves some level of Taoist enlightenment, which he subsequently uses to make his kung fu even better, and then he defeats all his enemies, furthering the glory of his native people, in this case defeating a group of foreigners in a four on one martial arts contest. It's a fine film, well made with some great action sequences, but I prefer his earlier, funnier films.

Clash By Night - This Fritz Lang film has the title of a film noir, and it's a part of Warner's second film noir box set, but I don't think it's a film noir at all. It's a fairly conventional small-town melodrama type film, with a terrific cast and fine direction by the great Fritz Lang. Barbara Stanwick's a big city woman who comes home to small town Monteray, California. She marries a local lug Paul Douglas, but carries on an affair with the local movie theatre projectionist, Robert Ryan. Eventually, affairs are discovered and children are born and Stanwick's brother marries Marilyn Monroe, but aside for an unusually accepting treatment of infidelity for a studio-era Hollywood film, there wasn't a lot to interest me here. Lang's, of course, a great director, so it's likely I missed something somewhere along the way. 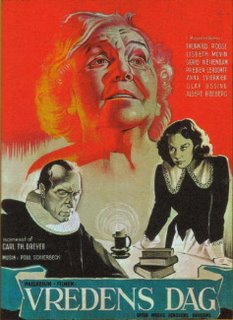 Day Of Wrath - Over the last few months I've been trying to catch up on all the auteurs I missed out on in college. One of the most prominent of those is Carl Theodor Dreyer. Despite the fact that I took a whole class on Scandinavian film (taught by a respectable scholar in the field no less: she did the commentary for the Criterion edition of Bergman's The Virgin Spring) I'd never seen a Dreyer film until The Passion Of Jeanne D'Arc less than a year ago. That's his most famous (and probably best) film, and I next watched his last film, Gertrud, which is stylized to the point of difficulty, at least on first viewing, but still very interesting. Over the last couple weeks I've seen Day Of Wrath and Ordet, and two more Dreyer's are upcoming this month on TCM (Vampyr and Leaves From Satan's Book). Anyway, Day Of Wrath's a terrific film, a claustrophobic story of witches and infidelity set in 17th Century Denmark. The local minister sentences an old woman to death for witchcraft, then his own young wife (herself the daughter of a witch) seduces his son. Largely restricted to the minister's house, the film nonetheless finds a varied visual style, most obviously a motif of crosses which dominates the first half of the film. Quite possibly a perfect film.

Wild At Heart - I've never been a David Lynch fan, and I can't say this film changed my mind. At least it didn't actively annoy me like Dune or Blue Velvet managed to. Nicolas Cage and Laura Dern star as young lovers on the run in this twisted genre exercise that reaches for some level of parallel with The Wizard Of Oz. They're on the run from Dern's mother, who sends some bounty hunters after them, then thinks better of it, with over the top bloody consequences for everyone involved (certainly the mom in a ridiculous scene). It's a fun enough ride, and Lynch once again manages to ensnare a far greater cast than he deserves: Cage, Dern, Diane Ladd, Willem Defoe, Harry Dean Stanton, Isabella Rosselini, Cripsin Glover and Sherilyn Fenn. The #32 film of 1990.
Posted by Sean Gilman at 10:37 PM 6 comments: