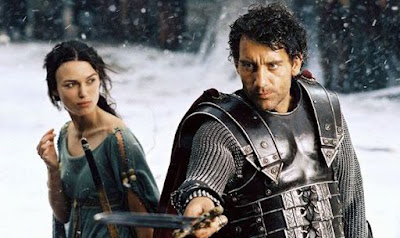 This 2004 film directed by Antoine Fuqua from a screenplay by David Franzoni is not just ahistorical in a run of the mill anachronistic or "hey things didn't happen like that" kind of way. That stuff is kind of annoying but it's mostly harmless. All histories, filmed or otherwise, are necessarily approximations of the truth. But this is antihistorical, it falsifies history in such a way as to not only make its audience dumber about the past, but in service of a nefarious agenda regarding the present.

Arthur is situated as the leader of a small band of Roman cavalry stationed at Hadrian's Wall in the late 5th century, at the time Rome pulled out from Britannia in the wake of Germanic and Gothic incursions throughout the Western Empire. His men, anachronistically called "knights" (knights won't actually become a thing for another 500 years or so, after the Norman conquest; this is an example of an acceptable anachronism, especially since the Arthurian legends, composed in the age of chivalry, have already imposed knighthood on the historical story (if there was one, more about that later)) are Sarmatians, drafted into Imperial service as part of a 3rd Century surrender agreement between their people and the Empire (not historical: the Sarmatians remained a power in the Ukraine and Balkan regions through the end of the Western Empire, though there is a theory that the Arthurian legends are influenced by or even sourced in, similar Sarmatian stories (notably one about a lady with a sword in a lake), the influence purported to have come from a community of Sarmatian veterans in Lancashire). Arthur himself is not Sarmation, but is half-British and half-Roman, having been raised by the renowned Christian theologian Pelagius (though probably of British or Irish origin, Pelagius nonetheless spent most of his life far south of where Arthur would have lived, also he died some 50 years before the events of the film take place and the film is wrong about almost every aspect of his life and beliefs).

Warring factions on the island include: the Romano-British, those native Celtic Britons that had been Romanized over three centuries of occupation; the Woads, led by the mysterious Merlin, these are non-Romanized Britons at war with the Empire, the name and their appearance recalls the Picts, the Celts who lived North of the Wall in Scotland (the Scoti likely were Irish Celts who migrated from Ulster to Western Scotland, at this time though the Picts were the dominant group in the area), though these Woads seem to operate freely on both sides of the Wall rather than be separated by it from the Empire, which was of course the main purpose of the Wall; the Saxons, Germanic invaders led by Cerdic and his son Cynric who land in Scotland and march South to take over the lands of the withdrawing Romans. This is inane geographically: the Saxons invade North of the Wall, which is not only ahistorical but incredibly dumb - rather than invade the South of England, they apparently travelled all the way north by boat simply to land on the opposite side of the most impressive defensive fortification in the Western Empire. The historical Saxons of course landed on the South and South-Eastern coasts of Britain, an area then known as the "Saxon Shore", Saxon raids on the Empire had been so frequent from the 3rd Century on that there was a whole Roman command dedicated to discouraging them, you can even still find Roman forts on the Saxon Shore today. And it's inane historically: Cerdic was an actual person, as was his son. They were the founders of the Kingdom of the West Saxons, known as Wessex (note: West Saxons, not "guys who invaded Scotland for no reason"). Their line of descendants, cut short in the film because, as the villains, they both get killed, is the line of the British monarchy, a more or less direct descent from Cerdic to Alfred the Great to William the Conquerer, Henry VIII, and the present Elizabeth II. So not only does this film put the West Saxons in the North, it kills off the entire history of English royalty. 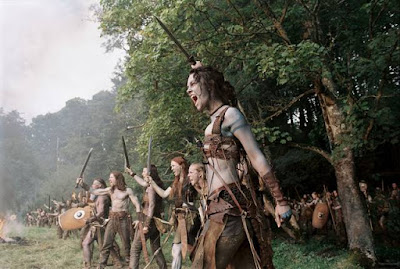 So what have we got here other than a tangled mess of misremembered history? If we posit that no film can be a true depiction of history, and that the task of historical fiction is to use the past as raw material for the telling of a story, one that tells us as much, if not more, about our present than it does our past, in effect broadening our myopic modern concerns with the weight and perspective of lost time (whether fanciful or factual), then what does this nonsense film accomplish? For any act of historical fiction that deviates from historical fact, there must be a reason. Usually this amounts to story expediency, minor historical details are modified to make for a more compelling narrative, as is the case in, say, The Lion in Winter, which depicts a family gathering of the Plantagenet nobility that likely never took place but that nonetheless sets an effective the stage for exploring the actual conflicts and interactions within that remarkable family. So to what end is history mangled in King Arthur? It's hard to read it as anything other than an apologia for neo-conservatisim and a justification for the Iraq War. Released in 2004, at the height of that propagandistic time, we have the story of a powerful garrison stationed in a faraway land, banding together for no reason other than fellowship and duty, to protect one group of freedom-loving primitives from another, more aggressive band. King Arthur was written by David Franzoni, the man also responsible for the historical farce that is Gladiator, which asserts that by overthrowing the decadent and fascistic dictatorship of the cruel Roman Emperor Commodus, a group of high-minded nobles and warriors will (did) bring freedom (that word again) to the backwards peoples of the Empire, which is, of course, the opposite of what actually happened in Rome (and Iraq, so far at least). Reportedly Franzoni is at work on two different historical fictions set in China, one a Yang Kwei-fei adaptation, the other set amongst 19th century pirates. I, for one, am very afraid.

This is the opposite of the narrative the Arthurian legends, if they are in fact sourced in history (which is highly debatable), represent. Tradition holds that the historical Arthur was one of the leaders of a band of Romano-British left behind after the Empire abandoned the island. In the wake of that withdrawal, Saxon immigration (which had been on-going for a century or so) to the island intensified. This was not necessarily in an invasion: one tradition holds that as groups of Romano-British warred amongst themselves, a band of Saxons were invited over as mercenaries and took a liking to the place, setting up their own space and gradually expanding outwards. There's even strong evidence that what happened wasn't so much a full scale migration followed by genocide and population replacement (as is implied by Cerdic preventing a Saxon rape because of a Hitlerian vision of the purity of Saxon blood: in fact, there's some evidence that the historical Cerdic was at least part-Celtic), but rather a cultural shift as the same Britons that had centuries earlier adopted Roman culture simply added Saxon culture to their existing identity (as these same people would later do with Viking and Norman influence - the English are nothing if not adaptable). But anyway, there were a series of battles fought as the various boundaries between Celtic (Welsh, Pict, Cornish), Romano-British and Germanic groups vied for control of the former Imperial lands throughout the 5th and 6th centuries. One of those leaders may have been Arthur (some identify him with the general Ambrosius Aurelianus, who won a decisive battle against the Saxons sometime in the fifth century that might have been at Mons Badonicus (Baden Hill), the site of the fictional Arthur's greatest victory). Arthur isn't mentioned in any contemporary historical accounts (of which there are very few), but from his earliest mentions is identified with the British resistance against the Saxons. The later Arthurian stories, popularized in France in the late middle ages come out of a different tradition entirely and this is the source of much of the chivalric lore surrounding the modern narrative (Guinevere and Lancelot and the grail quest, etc).

So both the film and the history have tell story of a valiant defense against a foreign invader, so far, so good. But Franzoni makes two major deviations. The first is in asserting that Arthur's band is foreign, rather than a native resistance, as it would have been historically. There's no other reason for this than to draw a parallel to the United States's mission in the Middle East. A film valorizing a native defense against a foreign invasion would send the wrong message in the midst of an American invasion of a foreign nation. This is the nefarious deviation. The second deviation is the geographical nonsense. This is less evil than it is stupid, but possibly even more dangerous. Franzoni has taken a handful of historical actualities and jumbled them together in such a way as to seem plausible, but are actually false. Cerdic and Cynric were actual people, Hadrian's Wall is an actual thing. There's just enough fact in the story to lend the propaganda the patina of truth - an obvious fantasy is no danger because few are likely to believe it, but just as I wonder how many people think the death of Commodus brought about a resurrection of the Roman Republic, I worry how many lies about the past people who see this film will come to believe (not many probably: thankfully the movie didn't have much of an audience and is largely forgotten today). There might be a reason to relocate the invasion North to the Wall, it being a much more dramatic location than the Kentish coastline, the decision to do so is more a matter of privileging dramatic effect over basic logic and common sense. For example, it requires the placing of a massive, defenseless Roman estate North of the Wall, the innocent occupants of which must be evacuated by our hero knights - obviously no such estate would exist: the whole point of the Wall was to keep the Romans on the South side and the Celts on the North. But there's no story reason for Franzoni to name his villains after the founders of the English royal dynasty, why do so other than to adopt the appearance of actuality? And just what is the implication here? Could it be that not only is Franzoni working to justify the invasion of Iraq, but he's also advocating for an American overthrow of the United Kingdom? Probably yes.
Posted by Sean Gilman at 8:39 AM 3 comments: