Running Out of Karma: Flying Swords of Dragon Gate 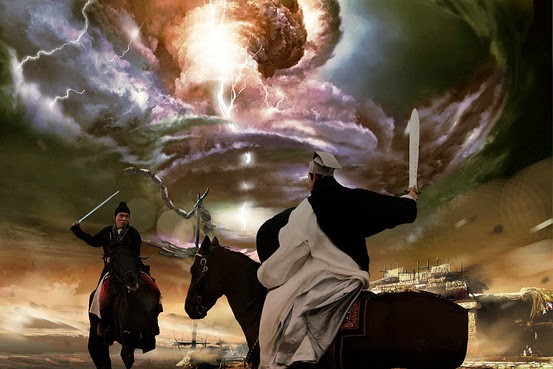 Tsui Hark's second variation on Kung Hu's masterpiece, after 1992's New Dragon Gate Inn (nominally directed by Raymond Lee). While that version added Tsui's Blues-movie style sexual complications, gender-ambiguity and a healthy dose of cannibalism while minimizing the fighting, this one ramps up the action and throws the whole thing into a 3D-CGI blender. The result is an uneasy mix of old school wuxia filmmaking with modern technology and Tsui's off-beat sense of character and coolness.

It begins as the other films do, with the evil eunuch leader of the East Bureau, a Gestapo force that's been terrorizing the populace in the name of the Emperor, holding a show trial for some honest officers that had been trying to expose his crimes. But right away, Tsui diverges from the traditional story: a black-clad assassin played by Jet Li bursts in and fights the eunuch (played by none other than Gordon Liu). This intergenerational showdown ends shockingly abruptly, and Tsui unmasks the new villains for his film: the West Bureau, and even eviler Gestapo led by an even more evil bad guy. This guy is the favored consort of the Emperor's most evil concubine, and the chase that will send everyone to the Dragon Gate Inn is a search for a pregnant maid, possibly but probably not carrying the Emperor's child. And also buried treasure.

The usual assortment of heroes and villains in disguise arrive at the inn, and like the other two versions of the story, the first half or so of the film involves everyone figuring out who everyone else is. There's a nod to the cannibalism of the 1992 film (itself an homage to The Black Tavern, a 1972 Shaw Brothers wuxia directed by Teddy Yip Wing-cho), but it isn't a major plot point. Added to the usual cast of estranged lovers are a gang of Tartar warriors, led by a tattooed and dreadlocked woman played by Gwei Lun-mei. Jet Li and his old friend Zhou Xun are the main romantic pairing: she's carried a flute for him (an homage to Brigitte Lin's flute in the 1992 film, perhaps) for many years and the two of them talk wistfully of the jianghu (the underground world of wandering knights that forms the homeland of the wuxia genre) and the sacrifices they've had to make because of it, a plot that leans heavily on memories of Crouching Tiger, Hidden Dragon.

Finally though, the fighting begins. Tsui retains his frenetic approach to action from his analogue collaborations with Ching Siu-tung in the late 80s and early 90s, adding to them modern technology. Tsui's first real commercial breakthrough as a director, after several edgier failures, was with 1983's Zu: Warriors from the Magic Mountain, in which he imported Hollywood technicians to make a fantasy spectacular. He did much the same thing with 2001's phantasmagoric CGI-fueled Zu Warriors remake. With Flying Swords, Tsui made the first 3D wuxia film (there have been several since, I particularly enjoyed Stephen Fung's Tai Chi Zero and Tai Chi Hero and Stephen Chow's Journey to the West: Conquering the Demons, which was only released in 2D here). I haven't been able to see it in that format, or his second 3D film, Young Detective Dee and the Rise of the Sea Dragon, so I can't speak to how well he utilized that technology. What I do know is that Flying Swords represents an extreme in Tsui's approach to wuxia action.

In 1995's The Blade, Tsui pushed the dizzying effects of camera movement and editing as far in the direction of bloody darkness as he could, creating a highly disturbing variation on Chang Cheh's The One-Armed Swordsman template, drawing out the blackest aspects of Chang's and Tsui's worldview, an overwhelmingly visceral vision of the jianghu as hell on earth. Flying Swords, on the other hand, couldn't be brighter or less realistic. It is wuxia as cartoonish fantasy, a world of freedom where literally anything is possible. There's hardly a realistic movement in the entire film, hardly a shot that hasn't been modified or manipulated by technology. This jianghu is a world without limits. Where if you want Jet Li to fight a dude while spinning madly hundreds of feet in the air inside a raging tornado, sure, we can do that.

Each generation gets the Dragon Gate Inn it deserves, I guess. King Hu's is a classicist masterpiece, one of the most efficient action films ever made. New Dragon Gate Inn captures the spirit of post New Wave Hong Kong cinema, reframing old genres with an exuberantly cockeyed sense of humor and a cast of gorgeous movie stars. Flying Swords attempts to merge this sensibility with the 21st century vision of action as the destruction of simulated cities, with an inhuman weather event both wiping out the iconic Inn and unveiling an older, more mysterious palace: the wuxia Shangri-La or Kingdom of the Crystal Skull. But we only get a glimpse of it before it too is digitally erased, leaving our actors alone, in the desert. Yet, despite all the whiz-bang, what I'll remember are the purely human elements, the way Gwei lounges in a collapsed frame, at ease yet poised to strike, her eyes alone betraying her excitement at the upcoming action. And Jet Li's sad eyes, the tired face of a man who has spent a lifetime fighting only to see the world grow ever crazier. And Zhou Xun's grim determination to join him on his hopeless quest. 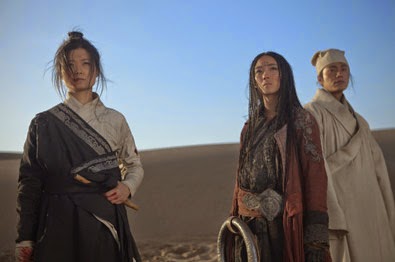 Posted by Sean Gilman at 3:47 PM No comments: