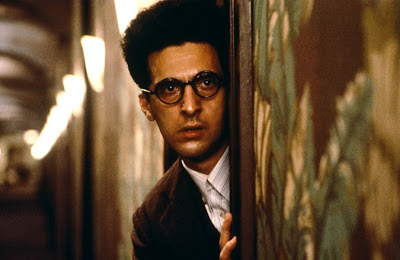 Posted by Sean Gilman at 6:50 PM No comments: 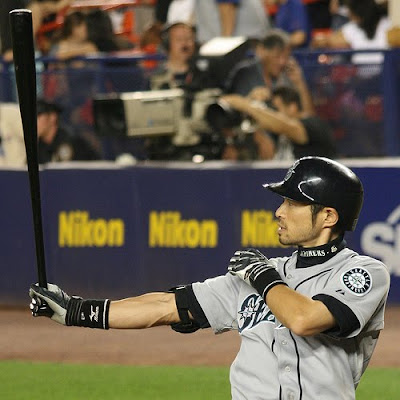 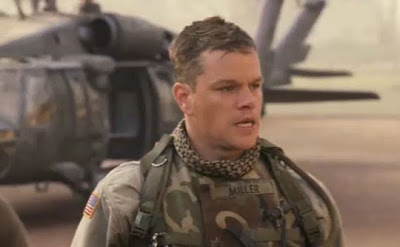 Green Zone - Matt Damon and Paul Greengrass reunite in a misguided attempt to either bring real-world political relevance to a Bourne-style action film, or to bring a Bourne-style excitement to the real world political thriller genre. It's one of those schizophrenic movies where neither style entirely works and the combination of the two makes the whole even worse than it should be. Greengrass's editing here is generally better than it was in the incoherently hyperactive Bourne films, but the plot is full of holes and really quite nonsensical: its dumbass conspiracy theory succeeds in making the reasons the US went to war in Iraq look comparatively logical and well-thought out. 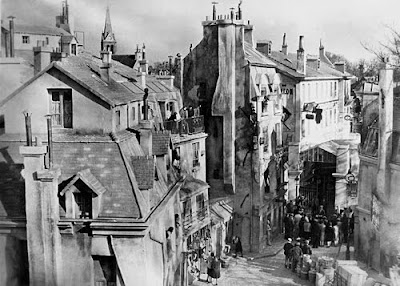 Under the Roofs of Paris - A fantastic little early musical from French director René Clair (Le Million, À nous la liberté) about an itinerant sheet music salesman who falls in love with a girl with an abusive gangster boyfriend (who also happens to be married). He wins the girl, gets framed for a crime and loses the girl to his best friend. And there are songs. Clair should get more credit: his early 30s musicals are better than Lubitsch's in pretty much every way: his camera moves more and more expressively, the songs and singing are better and the stories, with their bittersweet mix of comedy and tragedy are much more interesting. The #5 film of 1930. 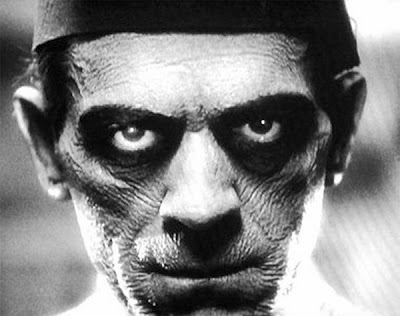 The Mummy - Boris Karloff plays the title character in this excellent 30s horror film directed by Karl Freund, the great cinematographer of German Expressionism (The Last Laugh, Metropolis). Karloff is brought to life by Egyptologists, and walks the Earth in search of the woman he loved thousands of years earlier, who conveniently enough is reincarnated in the body of the only woman in the film. The plot is essentially the same as the Brendan Fraser remake, but treating it seriously makes it even more effective than that admittedly entertaining film. It manages to be both moving and funny on its own terms, without any of the winkiness of the post-modern adventure film. Karloff doesn't wander around in bandages, by the way, he's in human form with a ton of great extreme closeups like the one above. The #10 film of 1932. 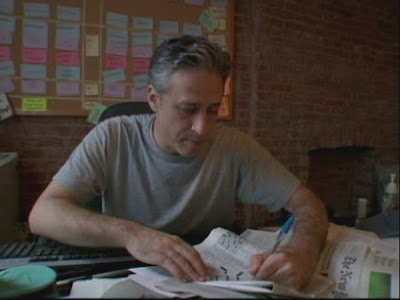 Wordplay - A fine documentary about crosswords and the people who do them, focusing on Will Shortz, the editor of the New York Times crossword puzzle. It's entertaining enough, especially for someone like me, who has at times, had issues with crossword addiction. There's a bunch of celebrity interviews, and we see the likes of Bill Clinton, Jon Stewart, Ken Burns, Daniel Okrent (who kind of invented fantasy baseball, which you think they should have mentioned here) and the Indigo Girls working on and talking about the Times puzzle. The dramatic structure of the film is the big Crossword tournament, which honestly isn't that dramatic, partially because the contestants, while likable enough, aren't particularly compelling. They're essentially just a nice, friendly group of geeks. The #30 film of 2006. 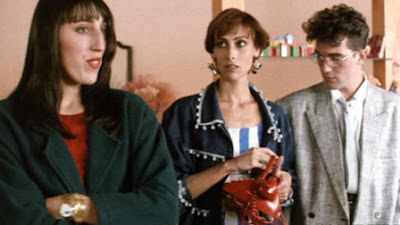 Women on the Verge of a Nervous Breakdown - A farcical melodrama from Pedro Almodóvar, with Carmen Maura as a voiceover actress who breaks up with her boyfriend, badly, tries stalking him, sets her apartment on fire, helps her friend, who may have unwittingly abetted Islamic terrorists and meets Antonio Banderas, her boyfriend's son. The first half of the film drags a bit, as we're trying to piece together exactly who all these characters are and what they are doing, but halfway through, when most everyone assembles in Maura's apartment, the film takes off in a whirl of wackiness. I liked it a lot more than the more accomplished, less fun and kind of distasteful Talk to Her. The #8 film of 1988. 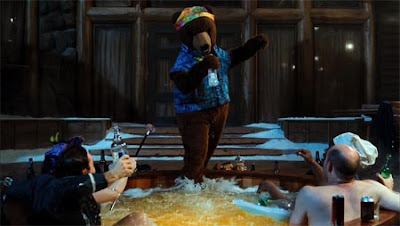 Hot Tub Time Machine - John Cusak, Craig Robinson and Rob Corddry get caught in the titular device and travel back to 1986, the time when they were in high school and their lives completely fell apart. They attempt to follow traditional time travel rules, but give that up in hopes of making themselves, and their futures, better. The film is pretty funny, lots of wacky humor and a fair amount of gross inappropriateness. Craig Robinson is that standout, as he is on The Office, and Rob Corddry tries really hard and is sometimes successful. Cusack, though, seems to be sleepwalking through the whole thing, and his is the least interesting storyline and character. A great, charming actor like, say, John Cusak could have done great things with the role. Too bad he didn't show up here. 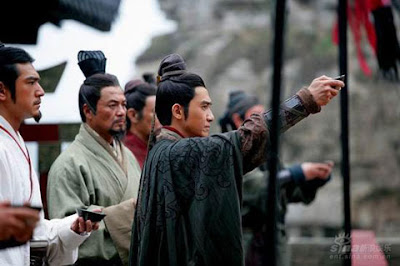 Red Cliff - I watched the two part, five hour international version of this, because that's the kind of guy I am. It's John Woo's adaptation of the Three Kingdoms, familiar as China's great national epic to Chinese literature scholars and video game players. And as an adaptation it's wonderful: most of the elements in the film are straight out of the book. It chronicles the early stages of a civil war during a lull in the Han Dynasty as Prime Minister Cao Cao invents a pretext to attack Liu Bei (a popular general from the West) and the area of Wu (the prosperous and independent-minded South). Liu Bei's advisor Zhu-ge Liang (Takeshi Kaneshiro) goes south to form an alliance with Wu, their leader (Chang Chen) and greatest general Zhou Yu (Tony Leung). The first half of the film follows the forming of the alliance, the second half the lead up to the Battle of Red Cliff and the actual battle itself. The actors are pretty good, especially the two leads, though I do think the film might have worked better with the original casting: Chow Yun-fat as Zhou Yu and Tony Leung as Zhu-ge Liang). It's a film almost without precedent, most comparable to the painstaking recreation in Gettysburg, its also the kind of film that Kingdom of Heaven should have been but mostly failed at. That Ridley Scott film got bogged down in melodrama and in ascribing complex historical forces to personal animosities. Red Cliff does that as well, but it works the same way The Illiad does: it's mythical enough that the incongruity between history and melodrama doesn't interfere with the enjoyment of the film. The #8 film of 2008. 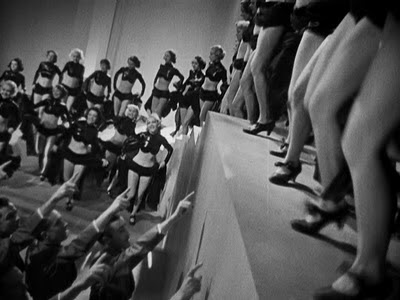 Gold Diggers of 1935 - The last of the films in my Busby Berkeley boxset, and unfortunately it's more Dames than 42nd Street, Gold Diggers of 1933 or Footlight Parade. I think the main difference between those great movies and these latter two duds is that they're about a group of people at work, whereas the other two are about madcap rich people at play. Amateurs putting on a show as opposed to professionals trying to survive in a business. That gave the backstage musicals a hard edge to counteract the general syrupiness of Dick Powell and/or Ruby Keeler, without it, the films are unmoored in a not particularly funny world of froth. Even the musical numbers here aren't that great: "Lullaby of Broadway" is a great tune, and it has a bold ending, but it's nothing compared either of the last two numbers in Footlight Parade, and the song certainly doesn't get stuck in your head the way even Dames's "I Only Have Eyes For You" does. The sequence does have some fantastically massive synchronized tapping, and the film's other number has a funny reference to King Vidor's The Crowd, with moving grand pianos in place of workers at their desks. The #17 film of 1935.
Posted by Sean Gilman at 6:01 PM No comments: