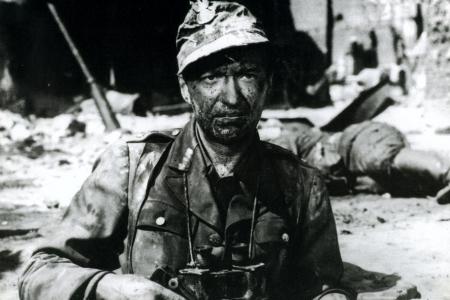 I liked the only other Andrzej Wajda films I've seen, Ashes and Diamonds, though I thought it was a bit overstuffed with Style! and Symbolism!, which is strange because generally I like that kind of thing (Cranes are Flying, for example, is all Style!, though less so with the Symbolism!).  This film is a bit more subtle, though that hardly seems an appropriate way to describe a film that equates war with Andy Dufresne's escape from Shawshank, except instead of crawling through "five hundred yards of shit smelling foulness I can't even imagine, or maybe I just don't want to", Wajda's freedom fighters are trapped there, seemingly for eternity.  The first third of the film is typical war movie stuff, introducing the characters and their relationships and making clear the hopelessness of their situation, in the waning days of the Polish revolt against the Nazis.  Soon the small band is cut off and their only escape route is through the sewers of Warsaw, and ancient labyrinth that looks back to Dante and ahead to Apocalypse Now.  Wandering in the darkness, wounded and poisoned by the noxious gasses, the group splits and splits again, until we're left with only a couple small groups of soldiers: a woman who knows the sewers well leading her dying lover to the sea, a composer who loses his mind, doomed to wander the tunnels blowing a haunting tune on an ocarina, and most poignantly, the platoon's Lieutenant, who, with an attendant, makes it to safety only to find the platoon had been left behind him long ago.  In a film so relentlessly hopeless, the Lieutenant's final act, descending again into hell to try to rescue his men, is miraculous.  He knows they're doomed, he knows he's doomed.  But he does it anyway.  It's as pure an act of heroism as you'll ever see in a film, done with resignation and horror.
Posted by Sean Gilman at 12:00 AM No comments: