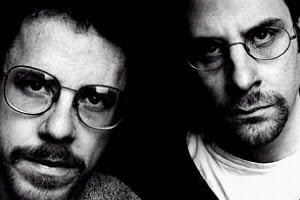 I know I promised some new content this week, so I guess I should write something. Ryland over at Vinyl Is Heavy is trying to get a bunch of folks together for a series of articles on the Coen Brothers, and I had a germ of an idea about responding to the attacks on the Brothers and No Country For Old Men from such esteemed quarters as Dave Kehr, Jonathan Rosenbaum and many of the folks on the "a film by" listserv. The charges basically come down to 1) an inappropriate attitude towards screen violence (ie, enjoying it too much); 2) condescension towards their characters (specifically rural, accented types portrayed as slack-jawed yokels); and 3) condescension towards their audience by failing to challenge either their beliefs about the world or film form.

But frankly, after weeks of reading and thinking about this stuff, I'm sick of the whole argument, for or against. As usually happens when I get to the end of an argument about film, I've reached the point where I think the whole thing comes down to subjective emotional responses, extraneous baggage that we all bring to the films we watch and which can't help but color our impressions of them. Yes, I believe that the violence argument is potentially valid, but I also think it's an artifact of the lefty baby-boomer self-righteous politicization that has run rampant through the universe, crushing everything in its path. (One of the dissenting voices on "a film by", unfortunately I forget who, pointed out that the polar opposite takes on the Coens and No Country, seem to be along the lines of "modernist" vs. "post-modernist" critics. I guess that puts me firmly in the "post-modernist camp, whatever that is.) The Coens choose sides in this struggle long ago with Barton Fink, an explicit attack on the kind of leftist, academic art that some many critics admire for its moral statements, but that doesn't have a damn bit of relevance to the lives of ordinary people. That the film went on to win the Palme d'or at Cannes can only have rankled these critics all the more. (Rosenbaum, in one of his less impressive critical arguments, apparently sees the film as nothing other than a personal attack on William Faulkner. A tree in a forest if ever there was one). I might find this criticism more compelling if it didn't seem to so often come from people who seem to have a personal dislike of the Coens as snot-nosed smart-aleck upstart kids who won't get off their lawn. (Swear to God: Kehr attacks the Coens for showing period-specific linoleum in No Country. Linoleum!) 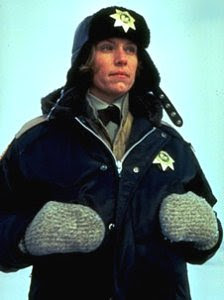 The second two arguments I find, to the extent that they are intelligible, to be entirely subjective, that is, wholly dependent on the mind of the viewer, regardless of anything the Coens put on the screen. I don't know how anyone who hasn't already made up their mind can find the Coens condescending to Marge Gunderson (in Fargo) or can see anything but the affection they have for every character in The Big Lebowski or Raising Arizona. As for condescending to the audience, well the Coens are populists, and I guess you can read giving people films they can enjoy as condescending. But personally, I don't see anything wrong with it. Of course, the ending of No Country has many in the mass culture outraged. It seems to be the middlebrow instead that's embracing the film.

I like the idea of the Coens as populists, reworking popular genres with their own idiosyncrasies. One of those being a fascination with rural America and specifically its speech patterns and accents. The Coens's filmography is a tour through the same world Bob Dylan explored with The Basement Tapes, what Greil Marcus called "The Old Weird America" (which may just have well been the title for O Brother, Where Art Thou?). Dylan dug through old recordings of ancient, pre-modern songs and ballads and put his own personal spin on the music of Appalachia, Delta Blues, English folk, Christian hymns, etc, adopting the speech patterns and diction of those who inspired him (something he had done from the very beginning of his career). The Coens work in the realm of both popular and formerly popular film genres (film noir, the gangster film, screwball comedy, the Western, etc) coloring those films with accents quickly vanishing from the American soundscape (Upper Midwest, West Texas, Appalachia, Irish and Italian American, Rosalind Russell) speaking ornate dialogue that is at once contemporary and oddly archaic. Not stylized to the extent of David Milch's Elizabethan Old West in "Deadwood", but instead just a little bit off. 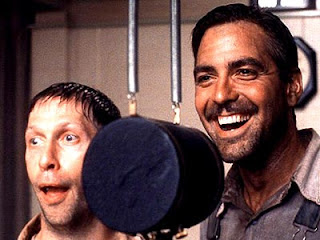 All their films work as traditional genre pieces while bringing something new to them. There's certainly nothing in any "serial killer" film (to use Rosenbaum and others' arguable categorization of No Country) to compare to the final third of the film, where it becomes something else entirely (A meditation on the timelessness of evil? A coming to terms with how we deal with the violence and chaos in our midst? A justification for apathy in the face of injustice? You tell me).

That the Coens are skilled filmmakers no one seems to argue. No they are not Hou Hsiao-hsien, or Robert Bresson or Jean-Luc Godard, inventing languages of cinema with every new film. But neither are they soulless Brett Ratners sucking all life out of the universe. They are largely apolitical genre filmmakers. And it seems to me that there's nothing a baby-boomer auteurist hates more than a technically skilled apolitical genre filmmaker. But, that's just like, my opinion, man.
Posted by Sean Gilman at 10:33 PM 4 comments: