Dirty Harry - Clint Eastwood stars in another of the late-60s/early-70s cycle of cop film, an interesting period that seems to have evolved from the darkest strains of film noir (Kiss Me Deadly or The Big Heat, say) into outright vigilantism. Released the same year as The French Connection, but pulpier and less self-consciously arty, and even more ideologically problematic. Eastwood's Harry Callahan (nicknamed because he gets all the "dirty" jobs) is on the trail of a Zodiac-inspired serial killer (cleverly disguised as "Scorpio"). While attempting to apprehend him during a ransom payoff (the killer has told the cops that the girl he's kidnapped will die in a few hours unless he gets paid), Eastwood stabs him in the leg, but Scorpio escapes. After a doctor treats the killer's leg, he calls the cops and tells Callahan he thinks the killer lives in the old football stadium across the street (Kezar Stadium: like Bullitt, this film is set in San Francisco, epicenter of hippieness). With only an hour to spare, Callahan rushes to the stadium, breaks into the killer's residence (without a warrant) and apprehends him. With the killer howling for his lawyer, Callahan steps on his wounded leg until he gives up the girl's location. This all happens with 40 minutes left in the film. We're then treated to what appears to be the film's political message: the DA releases Scorpio for two reasons: 1) the search of Scorpio's residence was illegal and 2) the charge of brutality against Callahan makes the confession inadmissible. Point 1 is clearly nonsensical, and after being made a big deal of, apparently solely for the audience's benefit, even the DA admits that exigent circumstances obviated the need for a warrant. Point 2 makes more sense, but is rather unrealistic. Even now, in the post-Rodney King era, charges of police brutality are hard to prove and not particularly likely to win in front of a jury. And given the nature of the crimes Scorpio admitted to, the fact that it's his word against Callahan (a decorated and admired police officer), it is extremely unlikely that any DA would refuse to prosecute based on that. 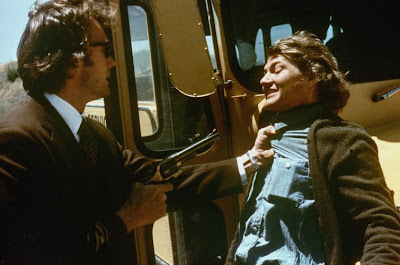 So what, then, are we to think of the politics of Dirty Harry? On the surface, it's a reactionary argument against Miranda rights and the coddling of criminals nascent in the late 60s liberal era. However, it stacks the deck so ludicrously against said liberalism that the question of whether it's actually satire has to be raised. Is director Don Siegel actually lampooning the critics of Miranda and other constitutional protections by reducing both their argument and their idea of what a police officer should be to absurd extremes? Callahan, by the end of the film, has become superman, leaping off bridges onto moving buses, rescuing school children and dispensing his own brand of justice with a .44 Magnum and a canned speech.

I think so, that like Starship Troopers 20 years later, Dirty Harry is a satire that is almost indistinguishable from that which it is satirizing. Both films were taken as straight at the time of their release. I suppose it can therefore be taken as a sign of progress for our society that while Dirty Harry was a smash hit, Paul Veerhoeven's masterpiece utterly failed to appeal to the popular imagination. The #9 film of 1971. 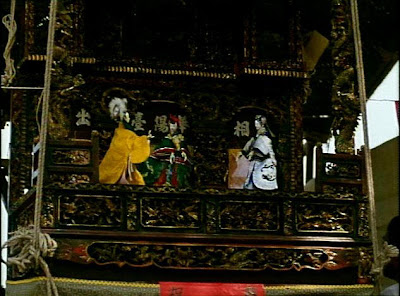 The Puppetmaster - The life of a puppeteer parallels the history of Taiwan during the first half of the 20th century, when it was run by Japan. Events from Li Tianlu's life are enacted in Hou's unique style (long, distant shots on a constant plane with little camera movement) interspersed with Li himself telling stories about his life, sometimes as narration, sometimes as on-screen interview. Li's stories are more or less related to what is about to be dramatized, more often it explains what we had just seen. It's fascinating for its whole 2 1/2 hours, one of the most interesting approaches to the biopic genre I've seen; it'd make a great double feature with another great biopic from around the same time, Stanley Kwan's Centre Stage. The DVD is cropped to 1.33, which sucks, but the movie still looks pretty great and it seems like most of the pertinent information (plot-wise) is shown, what we don't get is the full artistry of Hou's compositions. The #7 film of 1993. 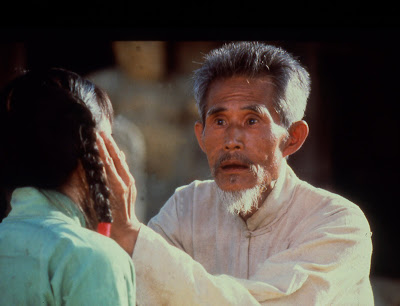 Life on a String - A old blind banjo player and his young blind apprentice wander the countryside, waiting for the old man to break his 1000th string so he can open his banjo and find the cure to his blindness (seriously). Stopping off in the desert, the young one hooks up with a local girl while the old man breaks up a gang fight by singing a song that's got terrible lyrics by even Chinese pop standards. Written by Chen himself, the song's about why can't we see that we're all brothers, etc, pounding that metaphor like a mediocre 8th grade creative writing student. Visually, Chen makes nice use of the desolate landscapes and cool locations. But all the drama is undone by the silliness of the plot and bluntness of the metaphors. After watching this, I read Jonathan Rosenbaum's capsule to see why he liked it. My only guess is the version he saw didn't translate the dialogue and lyrics correctly. The #45 film of 1991.
Posted by Sean Gilman at 12:33 AM No comments: