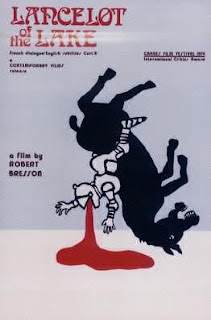 Fallen behind again, thanks to yet another cold. So, as word breaks that the A's have acquired former Mariner folk hero Chris Snelling, I'll drown my sorrows with my brand-new copy of Conan The Barbarian and try to kick out a quick-hit version of the roundup. This is Part One, which I wrote on Wednesday but am only getting around to posting now. Part Two will follow later this week, hopefully.

Lancelot du lac - Robert Bresson's version of the end of Camelot has essentially the same plot as the godawful First Knight (#86, 1995): Lancelot returns to Camelot after the failed grail quest, tries not to sleep with Guinevere, fails and the whole thing falls apart. However, Bresson takes the opposite route to filming a medieval epic. Instead of overblown melodrama, Bresson made a minimalist epic, consisting of little dialogue, his typically emotionless acting and a camera that willfully avoids showing the most obvious images of a scene in favor of sounds (hoofbeats in particular), and lingers longer than it has any right to over apparently inconsequential things (the knights' unarmored legs being a particular favorite). Like all the Bresson's I've seen, it unnerves you, defies your expectations and provides a wholly unique experience. The #6 film of 1974.

Wild Strawberries - Somehow I missed this when I saw it a few months ago, but frankly I was underwhelmed. The dream sequence was pretty cool, but other than that, this quite famous roadtrip movie about about an old professor traveling the countryside and flashbacking on his life (think Deconstructing Harry, without the jokes) just left me cold. The #10 film of 1957.

Metropolis - Fritz Lang's hugely influential mashup of the Communist Manifesto and the Tower Of Babel is perhaps the most influential sci-fi film of all-time. Tremendously expensive in its time, it set the template and standard for the way we think of the filmed future (Blade Runner's only the most obvious example of it's influence). As a movie though, it's got some serious flaws: a whiny protagonist, some obvious plot holes (complicated perhaps by the incomplete nature of the most recent restoration, though Lang's Dr. Mabuse, The Gambler had the same problem), and the interesting thematic choice of resolving the eternal struggle of rich and poor through a damsel in distress love story rescue.

The Long Voyage Home - John Ford's adaptation of a quartet of Eugene O'Neill plays set on board a ship near the beginning of World War 2. Shot by Gregg Toland not long before he did Citizen Kane, it's got the same brilliant deep-focus black and white photography. Terrific performances from Ford's regulars (Ward Bond, Thomas Mitchell, John Wayne, etc) liven the generally dour material.

They Were Expendable - Much to his distress, John Ford was pulled out of the war to shoot this propaganda film about the guys who proved the usefulness of PT boats in waging war during the battle for The Philippines at the start of WW2. As war films go, it's pretty great, with top notch performances from John Wayne and Robert Montgomery, some really nice scenes with Donna Reed, and some exciting action sequences.

8 Women - François Ozon's musical murder mystery stars three generations of hot French women, some of whom can actually sing. They're all gathered one winter eve only to learn that the family patriarch has been murdered. Cut-off from the outside world, it's up to them to solve whodunnit, airing all their dirty secrets and essentially exposing themselves as the most screwed up family you'll ever see. And all with a solo musical interlude for each actress. Stars Catherine Deneuve, Danielle Darrieux, Isabelle Huppert, Emmanuelle Beart, Fanny Ardant and Ludvine Sagnier. My first Ozon film, but it won't be the last. The #5 film of 2002.

The Informer - Tag Gallagher ripped on this a lot in his great book John Ford: The Man And His Films, though I liked it quite a bit. Gallagher didn't like the lack of tonal variance (all-serious, all the time), whereas I enjoyed the atmospheric, proto-noir, hyper-foggy images, and found plenty of humor and sympathy in Victor McLaglen's portrayal of a desperately poor former IRA operative who turns his old buddy into the police for the reward money. Sure, it doesn't rank with Ford's greatest films, but it's in the next tier.

The Wings Of Eagles - Another Ford film, this one a biopic about naval aviator turned paralyzed screenwriter Spig Wead. Wead and Ford were friends, and it shows in this rather tame film. Sure, Wead has his bad qualities, but he's still a helluva guy. Ward Bond does a hilarious Ford imitation as the Hollywood director Wead goes to work for, and like all Ford films, there are some really terrific moments, but they're way too few and far between. The #11 film of 1957.

A Scanner Darkly - Richard Linklater's interpolated rotoscope adaptation of a Philip K. Dick mindbender is perhaps the best Dick adaptation ever (yes, that includes Blade Runner). The fluid, squggly animation is perfect to the shifting realities of Dick's druggy, schizophrenic worldview. Keanu Reeves plays an undercover cop who loses his identity in his job (thanks to a killer new drug) and begins to suspect reality is even more fucked-up than it appears when you're high. Also stars famous druggies Robert Downey Jr, Woody Harrelson and the sorely missed Winona Ryder. The #4 film of 2006. 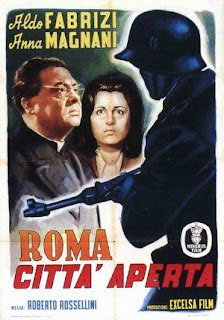 Rome, Open City - Roberto Rossellini's breakthrough film, and the movie that launched Italian neo-realism, shot with whatever the crew could find around town in the middle of a war. A story of the Italian Resistance during WW2, it builds to a devastating climax halfway through the film, such that everything that follows is, well, anti-climactic (much like Full Metal Jacket). Still, unlike, say Metropolis, it manages to be both stylistically influential and a tremendous film of its own. I'm not a big fan of neo-realism, at least, I didn't like Bicycle Thieves, but this was great.

How Green Was My Valley - The last of my Gallagher-inspired Ford marathon is this story of a Welsh coal mining town that famously beat Citizen Kane for the best picture Oscar. It's a fine film, with some wonderfully lyrical sequences (Maureen O'Hara's wedding, Roddy McDowell digging for his father) but after a single viewing I don't think it's the masterpiece Gallagher describes in his book. I don't know if he was overcompensating for the film's subsequent overshadowing by Kane, or if I just missed the many, many subtleties he found in the film. Perhaps a little of both.

House Of Yes - Parker Posey gives a fine performance as a crazy rich girl in an incestuous relationship with her brother (Josh Hamilton from Kicking And Screaming) in this decent enough pice of filmed theatre. Tori Spelling(!) plays Hamilton's appalled fiancée and Freddie Prinze Jr his younger brother. The #40 film of 1997.

The Trouble With Harry - Essentially Alfred Hitchcock's version of Weekend At Bernies, as a collection of eccentrics (including Shirley Maclaine and Jerry Mathers) in a small New England town discover, bury, exhume, and rebury (again and again) a dead body. Quirky and entertaining, with a marvelous sense of place. It's light Hitchcock, and a lot more fun than the similarly weightless To Catch A Thief. The #12 film of 1955.

Coconuts - The first true Marx Brothers film is also the worst one I've ever seen. There are some classic jokes, and some funny Busby Berkeley-esque dance sequences, but there's way too many lame songs sung seriously by non-Marxes. 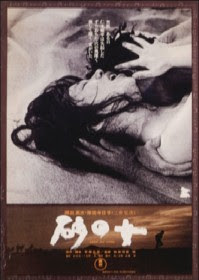 Woman In The Dunes - Hiroshi Teshigahara's beautiful, mysterious and odd little film zigged when I was certain it was going to zag, almost always a pleasant experience. A high school science teacher on vacation to study some bugs in a desolate desert gets tricked into living in a deep, inescapable sand hole with an odd, and not unattractive, widow who wants to 'marry' him. I was prepared for an intense Japanese ghost story along the lines of Kwaidan or Ugetsu, instead it's naturalistic and more than a little political allegory. Lyrical and kinky, it looks a little like Resnais's Hiroshima mon amour with sand. The #7 film of 1964.

2 Or 3 Things I Know About Her - One of Jonathan Rosenbaum's favorite Jean-luc Godard films, I found it more of a way station between the Godard highlights Pierrot le fou and Week End: absurdist and comically self-referential like the first; logorrheic and blatantly political like the second. The plot setup is essentially the same as Buñuel's Belle de jour: middle-class housewife is a prostitute in her spare time, but it's more a slice of French life in the late 60s than an actual story. The #7 film of 1967.

The Loyal 47 Ronin - Kenji Mizoguchi's two-part adaptation of the classic Japanese story (think their version of The Gunfight At The OK Corral or the Omaha Beach landing) is a masterpiece of action withheld. Through its nearly four hour running time, there's almost no scenes of violence, including none of the many many ritual suicides that punctuate the story. Clearly what Mizoguchi's after is not the action violence of a great revenge epic as the titular ronin seek to avenge their lord who was forced to kill himself after insulting a venal superior. Instead, he examines the culture and society that leads to a world in which mass suicide is the greatest possible act of honor. Filled with his signature long tracking shots, his camera constantly cranes over walls following the characters from above and thereby exposing and transcending the boundaries they choose to live in.

The Mizoguchi Movies I've seen, and all are great: