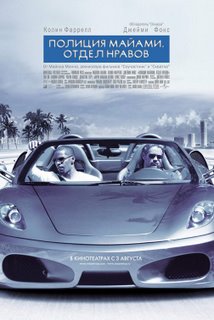 Eighteen recently seen movies I need to write about. So, with a refreshing martini, Buffy on the TV (hey, that's the guy from Deadwood and Me And You And Everyone We Know!) and while trying to ignore the fact that Mark McGwire probably won't get elected to the Hall Of Fame because he plead the Fifth during a Congressional witch-hunt. In that vein, here are some noirs and pseudo-noirs:

Miami Vice - I've seen Michael Mann's latest film twice now, and it's easily the best movie of the year thus far. In essence a sequel to Heat, it covers the same terrain of professionals who are obsessed with their jobs. The difference is that this time there's no need for all the speeches foregrounding the themes. Instead, there's hardly any dialogue at all that isn't mumbled, jargonic and oblique. That's a good thing, as far as I'm concerned at least. Visually, the film is stunning. Mann, with this and Collateral (#11, 2004) has done some pioneering work with high-definition digital cameras. The daytime scenes are filled with light, vibrant, colorful and incredibly detailed (the digital camera has an unbelievable depth of focus), while the night scenes are blurry, fuzzy, and impressionistic. The main characters, Colin Farrell and Jamie Foxx playing MTV cops Sonny Crockett and Rico Tubbs, are constantly framed against the Miami sky, with it's incredibly detailed and expressive clouds (and the occasional flash of lightning). The effect is one of puny humans struggling in vain in a hell of their own making, all the while being tragically aware of an unattainable heaven hovering above them, always just out of reach. The skies are hopeful and oppressive simultaneously. The supporting cast features some very strong performances by Gong Li, Naomie Harris (from Pirates 2), John Hawkes (the Deadwood guy mentioned above), Ciarán Hinds (from Rome and Munich), and Luis Tosar and John Ortiz as some very bad guys, Ortiz the psychotic jeri-curled crazy guy and Tosar the eerily calm, truly frightening Big Boss.

T-Men - This fairly early Anthony Mann film is more of a police procedural, than a noir, as it tells the story of the Treasury Department's anti-counterfeiting detectives in a pseudo-documentary style. Based on a composite of actual Treasury cases, the film's entertaining enough as a crime story, and it's shot with obvious skill by the great noir cinematographer John Alton. It's a B-movie story with a B-movie cast but A-list talent calling the shots. Interesting if you're into Mann, otherwise, it's decent enough. 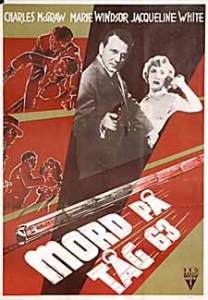 The Narrow Margin - This is more like it. At barely one hour long, this sleek little noir is certainly a classic. It was remade in 1990 with Gene Hackman, and is my #41 film of that year. The original's much better, directed by Richard Fleischer (His Kind Of Woman, 20,000 Leagues Under The Sea, Soylent Green, Conan The Destroyer, and Red Sonja) and interesting director who certainly had an interesting career. The set-ups as basic as they get: a cop has to protect a witness on a train trip from Chicago to Los Angeles. The bad guys, of course, are on the train as well and while they know who the cop is, the witness is unclear.

Dark Passage - Another of the Bogart-Bacall collaborations (along with To Have And Have Not, The Big Sleep, and Key Largo, all of which are better), this time directed by Delmer Daves in a rather mediocre style. The interesting thing, I guess, about the film is that the entire first third takes place before a point of view camera as Bogart's escaped con makes his way into the city and to a plastic surgeon. It's only after Bogart has the surgery that we get to see what he looks like, or anything from any real camera perspective. The first person camera thing was also done in The Lady In the Lake, a Chandler adaptation directed by and starring Robert Montgomery in 1947, the same year as this film. That's about the only interesting thing about the film, as far as I know, because it's all I can remember. It's just another generic 40s thriller with a gimmicky camera trick.


Picking back up after a day long delay. Now with the freshly delivered Season 4 of Newsradio playing. Super Karate Monkey Death Car, in fact. 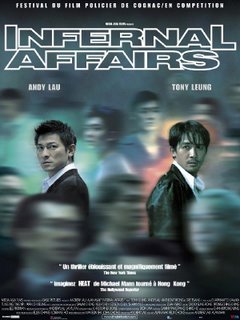 Infernal Affairs - Andy Lau and Tony Leung star in this Hong Kong noir that goes over a lot of the same terrain John Woo dealt with in his late 80s/early 90s classics such as Hard-Boiled (#5, 1992) and The Killer (#6, 1989). Leung plays a cop who goes undercover in a criminal gang, Lau plays a gangster who goes undercover in the police force. Inevitably, their paths cross and each is assigned by their boss to find the mole in the organization, which is, of course, himself. It's not as flashy or exciting as Woo's films, but it has more psychological depth, some suspenseful action sequences, great performances from the two leads (who are always good) and a nice shiny visual look. The movie was directed by Alan Mak and Andrew Lau, no relation to the star. Martin Scorsese's remaking it as The Departed, set to be relaesed this fall and starring Jack Nicholson, Leonardo DiCaprio, Matt Damon and Marky Mark Wahlberg.

The Roaring Twenties - Raoul Walsh's gangster epic starring James Cagney and Humphrey Bogart. After returning from WW1 and finding the job market for veterans rather rough, Cagney becomes a cab driver and, eventually, a transporter of bootlegged alcohol. Bogart becomes a gangster and their friend Lloyd becomes a lawyer. Eventually they all join up to form a criminal syndicate. And of course, this being a gangster film, it all falls apart in a cascade of violence and betrayal. It's a great film, a real classic of the genre. 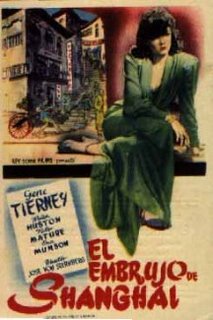 The Shanghai Gesture - This Josef von Sternberg film is very weird. I guess you could say that about any of his films, actually. Ona Munson plays Gin Sling, the proprietress of a casino (etc) in pre-war Shanghai. Unfortunately for her, Walter Huston and a bunch of businessmen want to shut her place down. Complications ensue when his daughter, Poppy, played by the very hot Gene Tierney (Laura) becomes a drunken, debauched gambling addict and a regular at Madam Sling's establishment thanks to the persuasive powers of Victor Mature's Doctor Omar, who appears to be a pimp of some sort. A fun, beautiful, dark, cynical, perverted masterpiece of a film.

After The Thin Man - The first sequel to the classic screwball mystery starring William Powell and Myrna Loy as alcoholic sleuths Nick and Nora Charles. This time, after arriving in San Francisco to hang out with Nora's wealthy and annoying family, they become caught up in the mystery of her cousin's missing husband. They succeed in tracking him down, but then he's murdered, apparently by said cousin. Nick and Nora must then solve the crime and rescue the cousin. Along for the ride is Jimmy Stewart, in one of his early roles that's a terrific showcase for the mix of folksy and neurotic that Stewart would go on to exemplify. Really, that's about the best part of the film. It's not nearly as funny or entertaining as the first one. But Stewart's great.
Posted by Sean Gilman at 7:03 PM No comments:

A couple of things from around the internet:

1. A nice interview with Werner Herzog from an Australian paper. Here's the whole of the Burden Of Dreams speech as well:

2. A trailer for Martin Scorsese's upcoming inspirational film The Taxi Driver.
Posted by Sean Gilman at 12:19 PM No comments: