All Men Are Brothers - A sequel to the Chang Cheh-directed adaptation of a section of the classic Chinese epic The Water Margin, which I wrote a little about here.  This one isn't quite as good, though it is more focused in story and character.  The band of outlaws from the first film, now reconciled with the Emperor, attempts to capture the seaside town Hongchow.  Spies infiltrate the city, come up with a plan, and execute it.  In the meanwhile, lots of heroes get the chance to prove their heroism by dying heroically in Cheh's characteristically brutal kung fu sequences.  David Chiang again stars, though he doesn't get the chance to be as charming as he was in the first film.  The #11 film of 1975.

Brothers Five - More interesting is this film starring Cheng Pei-pei (Come Drink With Me, Crouching Tiger, Hidden Dragon).  She plays the daughter of kung fu master who's sworn to reunite the separated children of the title so they can take revenge on the villain who killed their father and whose gang terrorizes the local town and countryside.  The brothers have no idea of their family history, but have each learned complementary skills that only they can combine, Voltron-style, to defeat the bad guy.  Again, the fight scenes are the big draw here, and they are impressive.  More unusual is the way director Lo Wei films them, often in overhead longshots that are far more panoramic and lyrical than you usually get in Shaw Brothers films of this period.  This lends his big action set-pieces, with dozens of soldiers fighting multiple heroes in discreet parts of the frame, a scope and grandeur unlike anything else I've seen.  Lo went on to direct a couple of Bruce Lee films I haven't seen yet (Fist of Fury and The Big Boss).  I guess I need to watch those now.  The #6 film of 1970. 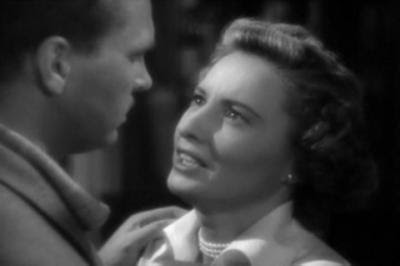 No Man of Her Own - Directed by Mitchell Leisen, Barbara Stanwyck plays a poor knocked up girl abandoned by her jerk of a boyfriend who gets mistaken for the new daughter-in-law of a rich family after a train crash (the real daughter and son are killed, no one knew what the actual bride looked like).  She goes along with it, for the sake of her kid, naturally, and falls for her dead supposed husband's brother.  When the old boyfriend shows up talking blackmail, we get to find out just how noir the movie's going to get.  It's a solid film, but Stanwyck could do roles like this in her sleep.  The rest of the cast and crew are very competent, but the film never really gets as twisted as the material, and Stanwyck, seems to want it to be.  Instead, Leisen goes for the melodramatic punch and pretty well succeeds, or maybe I'm just a sucker for sad moms.  The #18 film of 1950. 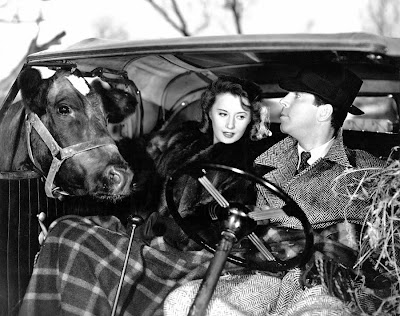 Remember the Night - An even better Stanwyck/Leisen collaboration is this screwball melodrama written by Preston Sturges.  Stanwyck is a petty thief who gets arrested right before Christmas break; Fred MacMurray's her prosecutor.  Through irrelevant narrative maneuverings, Fred ends up taking Barbara to his family's idyllic middle American homestead for the holidays.  Along the way, her hard-boiledness melts away thanks to the generous awesomeness of the American rural middle class (personified as usual by Beulah Bondi).  It sounds silly, but the actors are so good, and Sturges's script so smooth, that by the time I realized what was happening, I was hooked and believed every bit of it.  It's not as crazy as the films Sturges directed himself, I have to think that's due to Leisen, a director who seems more at home in the midwest than the anarchic city.  Not that he didn't make great straight screwballs: Midnight and Easy Living are unassailable, but even they aren't as wild as the best of Sturges.  This film seems a pretty perfect middle ground between the two of them.  The #11 film of 1940. 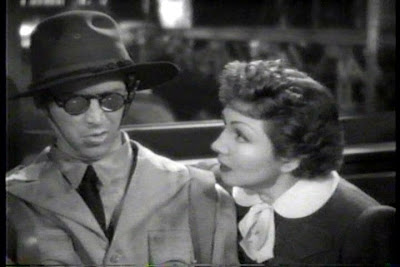 It's a Wonderful World - Few screwball comedies are as wild, though, as this one by WS Van Dyke from a screenplay by Ben Hecht and Herman Mankiewicz.  A kind of combination of The 39 Steps and It Happened One Night, Jimmy Stewart is a private eye who's going to jail for protecting his client, a rich drunk who's been framed for murder.  He escapes, daringly jumping from a moving train into a river while handcuffed to a cop, who he then beats into unconsciousness, as only Jimmy Stewart can.  Reaching shore, he kidnaps Claudette Colbert and drags her along as a hostage, beard and eventual generally unhelpful co-conspirator.  While of trying to evade the police and gather the evidence needed to free the rich drunk before his execution, the two adopt a dizzying array of disguises and knock many, many people on the head.  It's everything you want a zany screwball proto-noir to be.  The #21 film of 1939. 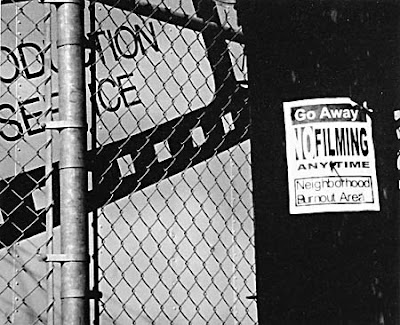 Los Angeles Plays Itself - Thanks to the wonderful world of copyright law, this magisterial documentary by Thom Anderson is unavailable on DVD.  It's a two and a half hour look at representations of Los Angeles (not "L. A.") in Hollywood cinema throughout the 20th Century, and mostly about how bad or annoying or wrong those representations are.  It seems that, like the rest of us, Los Angeles hates itself.  Consisting entirely of film clips (there are hundreds, hence the rights issues), Anderson manages not only a highly personal history of a city (along the lines of the more recent My Winnipeg by Guy Maddin, Of Time and the City by Terrence Davies and I Wish I Knew by Jia Zhangke) but also a fascinating study of the way film uses architecture and environment to convey meaning (almost always, quite literally, in the background) and occasionally different meanings with the same architecture.  Most damning, for Anderson, is Hollywood's demonization of mid-century modern architecture, which we see again and again in the movies as proxies for villainy (the Lethal Weapon 2 clip here is possibly the funniest moment in a very funny film).  I'd never before seen an entire film over the internet, and a don't like watching them on computers, but this singular film is absolutely worth seeking out by whatever means are available to you.  The #3 film of 2003. 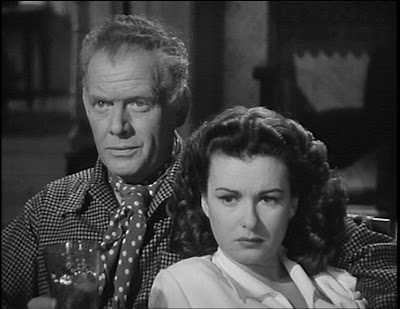 The Woman on the Beach - Jean Renoir left France for Hollywood in the wake of the disastrous opening of The Rules of the Game and the German invasion.  He made a few films while here, this being the last of them (the only other one I've seen, The Southerner, I liked quite a bit).  This one was apparently extensively altered after he finished with it, in an attempt to make it more popular, but that, as it usually does, failed.  It's a moody noir with Robert Ryan as a Coast Guard officer with PTSD who falls for Joan Bennett, who's married to a blind painter played by Charles Bickford.  Ryan thinks the painter's faking his blindness as an excuse to keep Bennett around, but he's really just nuts (both because of his personal trauma and Bennett's considerable charms).  Crazy as well are Bennett and Bickford, who have traumas of their own they aren't dealing with productively, so it all makes for a wild love triangle where everyone is mean to everyone and three horribly damaged people can't quite manage to get past what damaged them.  It might be the saddest noir I've ever seen, but I'm not sure any of it makes the least bit of sense.  The #11 film of 1947. 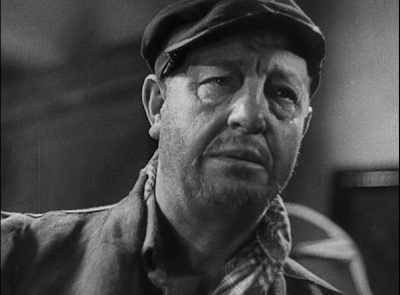 Les Misérables - This is the massive French version of the Victor Hugo novel, directed by Raymond Bernard and running about four and a half hours long in three parts.  The only experience I had of the story before watching this was the 1998 version with Liam Neeson, Geoffrey Rush and Claire Danes, which I passionately hated, and the song from the musical version that Katie Holmes sang near the end of Season One of Dawson's Creek, which is awesome.  I'd pretty much forgotten why I didn't like that other movie, though watching this brought it all back.  Jean Valjean is an excon who tries to go straight, only to be hounded by a police inspector who keeps running into him.  In the '98 version, Valjean's persecution seemed nonsensical to me: there's no reason given other than that poor people have a tough life and this particular inspector hates him beyond all reason.  This version does a better job of motivating Inspector Javert and even makes him somewhat sympathetic.  But still, despite the massive running time, the film feels schematic, like Hugo had a point he wanted to make rather than a world or people he wanted to create, or a story he wanted to tell.  Bernard does pretty well with the material, especially with the film's most exciting sequences, the climaxes to parts one and two and an extended vision of one corner of the street fighting during the 1832 Rebellion.  Harry Baur is pretty well perfect as the outsized (physically, morally, intellectually) Jean Valjean, he's kind of a slower, more Gallic Charles Laughton.  I imagine that if this is a story you like, then this would be the version to see.  As it is, and despite its virtues, it's probably my least favorite four hour plus movie.  The #13 film of 1934.
Posted by Sean Gilman at 3:21 AM No comments: 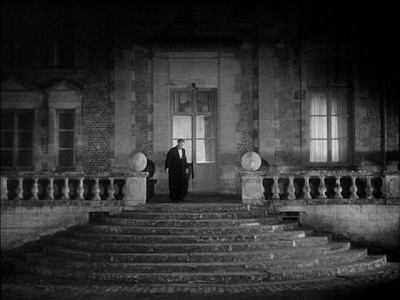 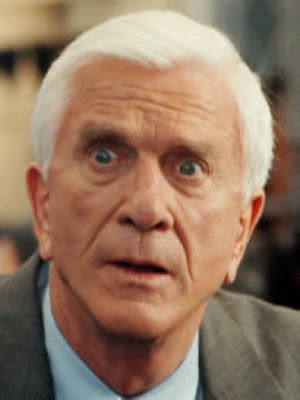 Posted by Sean Gilman at 5:48 PM No comments: