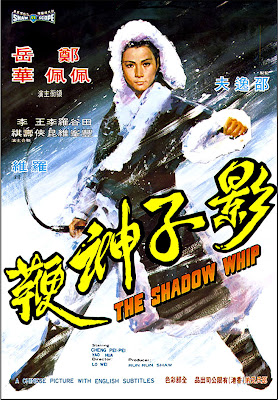 The Shadow Whip - Cheng Pei-pei (Come Drink With Me, Crouching Tiger, Hidden Dragon) stars as the adopted daughter of the world's foremost expert in bullwhip kung fu.  When the people who killed her parents and framed him for theft track them down, it's up to her and a handsome traveler to defeat the bad guys and right wrongs and such.  Directed by Lo Wei, whose Brothers Five, made the previous year and also starring Cheng, I found so impressive a few months ago.  There are a few of the signature overhead group choreography shots that were so striking in that film here, but mostly the film is done in by the cheapness of the stunts (including the most obvious wire I've ever seen in a kung fu film) and the inherent impossibility of creating good fight choreography when the protagonist's weapon is a whip.  It just looks dumb.  And speaking of looking dumb, poor Cheng Pei-pei is dressed like Santa Claus through the whole thing.  The #18 film of 1971. 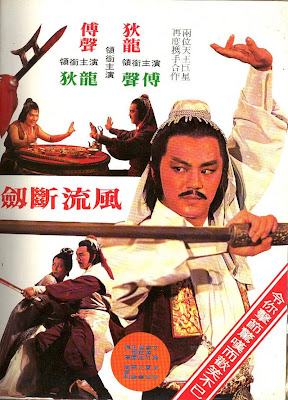 The Deadly Breaking Sword - An unusual film in that none of the characters are particularly sympathetic, or even likable, but nonetheless has some good fight scenes and big stars Ti Lung and Alexander Fu Sheng.  Ti plays the owner of the titular weapon, a sword which he breaks off a bit of inside every person he defeats in combat.  He walks the earth proving what a badass he is and killing people who challenge him.  The other hero, Fu, is a reprobate gambler and monkey style expert.  The plot involves various people searching for the Killer Doctor, for various reasons (revenge, pride, debt collection, etc).  Director Sun Chung creates a complex web of character interrelationships in a much more sophisticated plot than another kung fu mystery, Chang Cheh's The Five Deadly Venoms.  But that film had, eventually, a spectacular climactic fight sequence and a number of charismatic performances.  This one has merely good fights and good performers playing unlikeable, and mostly uninteresting, characters.  The #17 film of 1979. 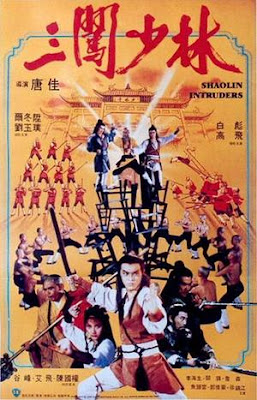 Shaolin Intruders - Vastly superior is this film by Tang Chia.  Someone is killing the heads of the top kung fu clans, and all signs point to the Shaolin Temple.  Three heroes investigate (after being accused themselves of the crimes) and must fight their way (non-fatally) through the temple before they are allowed to ask any questions.  It's a flimsy plot premise, but stronger than something like Heroes of the East (though that film is a lot of fun) and the fight sequences are very good.  Tang was a choreographer early in his career with Lau Kar-leung, and the similarities show.  It's hard to pick the best sequence, as all of the Temple fights are well done, but the showdown with the Temple abbot on a room full of benches (prefiguring one of my all-time favorite fight sequences: the battle on the crowd in Jet Li's The Legend of Fong Sai-yuk) would probably take it if I had to pick one.  The #6 film of 1983. 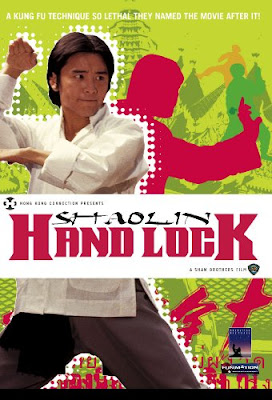 Shaolin Handlock - Maybe it's the influence of Bruce Lee, or just the modern day setting, but this David Chiang film feels weirdly out of place.  Or rather, David Chiang feels weirdly out of place in this modern day film.  He's the son of the inventor of the titular kung fu style who is investigating his father's murder.  It actually doesn't take much investigation (just burst in on a bad guy in the middle of a tryst with a naked prostitute and ask), he spends most of his time playing a Raymond Chandler-esque game of posing as the villain's new bodyguard and poisoning him against his right-hand man (think Miller's Crossing).  There is a clever twist to that formula near the end, albeit one that strains all credulity.  There are some good fight sequences, but they're pretty rare, though the final showdown is pretty good.  The #13 film of 1978. 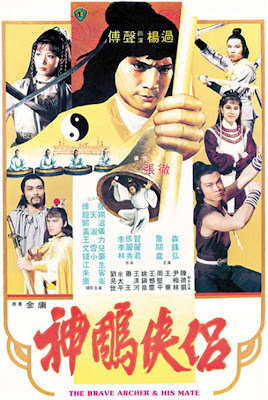 Brave Archer and His Mate - This is the fourth film in the Brave Archer series, and I haven't seen any of the first three.  Perhaps that explains the rapid-fire exposition of the first third of the film, where characters get killed, solve murders, double-cross each other and kill even more people with remarkable alacrity.  Eventually, things mellow out and we travel 15 or so years into the future.  The Archer and his Mate raise some kids, one of whom is the son of a bad guy that got killed in the beginning.  When they start to teach their brood kung fu, the adopted kid (Alexander Fu Sheng) gets picked on, turns a little evil and falls under the influence of crazy bad guy Ouyang Feng (played by Wang Li).  This bad guy is actually the Leslie Cheung character from Ashes of Time, as this was based on the same Louis Cha novels as Wong Kar-wai's film (there are absolutely no other similarities between the films).  Anyway, the Ouyang Feng plot gets quickly resolved and the last third of the film takes place in a totally different environment, as the Archer and Fu Sheng help some monks fight off some horny bad guys who want to hook up with a dead girl.  Or something.  This is the only part of the film with any real fight sequences, and director Chang Cheh utilizes several of his Venoms to good effect.  On the whole, the movie's a mess, and I doubt it would be better after seeing the first three films, since it's mostly the story of a whole new generation of characters.  The #24 film of 1982. 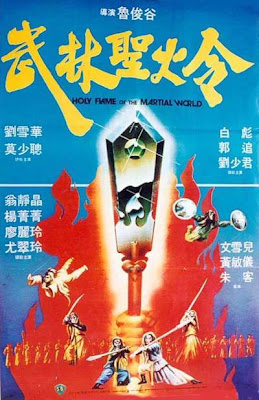 Holy Flame of the Martial World - One of those kung fu movies where people fly around and shoot fire out of their hands and stuff, though it doesn't have the inspired lunacy of the Chinese Odyssey films or the manic chaotic energy of Kung Fu Cult Master.  A husband and wife team has a map to the Holy Flame, a kind of badass sword, and a group of martial arts clan leaders murder them for it.  Their daughter is raised by one of the bad guys, their son by a good guy (whose signature technique is a laugh that creates a hurricane).  When they grow up, the guy quests to find the sword, rescues the daughter of a snake salesman from a human sacrificing zombie clan (she gets some powers of her own when a snake bites her finger, allowing her to shoot lasers from said finger) and makes friends with the disciple of one of the bad guys.  Eventually, there's a showdown between bad guys and good guys, with tons of cheesy special effects and nonsense dialogue.  It's a fun film.  The #17 film of 1983. 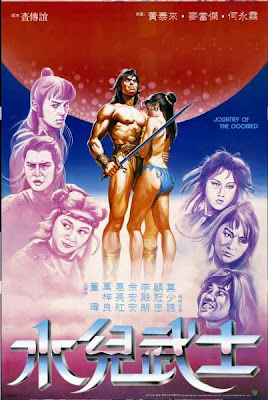 Journey of the Doomed - A weird kind of exploitation melodrama with a little kung fu thrown in.  A young girl raised in a brothel (but still a virgin) is discovered to be the illegitimate daughter of the heir to the throne  Both the heir and his brother send people after her, leading to the extended and explicit slaughter of every girl in the brothel (and there are a lot of them).  This, and an opening sequence of a john torturing another girl, seem to exist merely for the opportunity to revel in violence against naked women.  Then the film turns into a weird domestic romance, where the girl and the guy who eventually saves her from her assassins settle down in a cabin in the woods (complete with a happy country life montage).  That goes wrong when the girl becomes jealous of the mute girl who also lives in the woods and isn't nearly as pretty and runs away.  It all ends in a spectacular, bloody fire.  Strange, and mostly unpleasant.  The #34 film of 1985.
Posted by Sean Gilman at 11:42 PM No comments: