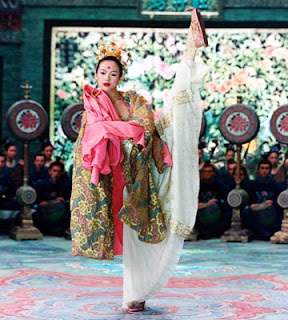 Came across a well-written essay on House Of Flying Daggers today, by a critic named Ken Chen. He levels the same accusation against Zhang Yimou's Hero that I argued against here a few weeks ago, that the film is pro-authoritarian and represents an ideological backsliding on Zhang's part. I see it instead as an examination of national myth and a critique of the passivity in Chinese philosophy (specifically the Taoism and Buddhism prevalent in the martial arts genre) that allows the kind of narrative manipulation propagated by the state to be so successful.

But one interesting thing about the piece is that he lumps a number of recent films into what he calls the "martial arts plus" category:

Daggers, however, is director Zhang Yimou's follow-up to the callowly beautiful Hero and, like that movie and a number of others (Ashes of Time, Bride with the White Hair, Crouching Tiger, Hidden Dragon, Kill Bill, Zatoichi, Warriors of Heaven and Earth, and, in a way, Goodbye Dragon Inn), it belongs to a martial arts/art-house genre of films by hip young directors upgrading genres they loved as teenagers-"martial arts plus." . . . .

"Martial arts plus" movies tend to be fun, hysterical, and lifeless: they conflate Hong Kong exoticism, choreography, and zany exploitation flick bloodletting with American production values and the most potent Hollywood commodity of all-rampant sentimentality. But, like many martial arts plus movies, Daggers is also never really touching. It is willing to trade emotions (things so intrinsically ascetic that we cannot even see them) for the aestheticism of production values, spectacle, and homage. Because they quantify lyrical effects, martial arts plus films hoard their art rather then saving them up only for the most crucial, tactical moments. These effects end up micromanaging the movie and, as style-anthologies, films like Kill Bill rarely meld together into larger, mist-like whole. So the martial arts plus movie (like noir, surrealist art films, musicals, and Godard) must answer a rather unromantic question: is mere art enough for art?" 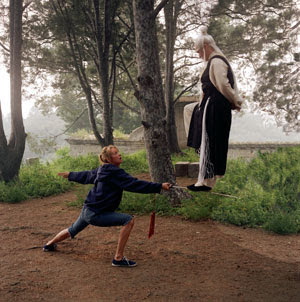 This style over substance critique is nothing new in the film world, nor is it restricted to this particular genre, as Chen hints at in the last sentence above. The martial arts plus movie, like the Spaghetti Western, the neo-noir and the collected works of Martin Scorsese, Quentin Tarantino and the Coen Brothers exists as not as a genre in itself but as a response to, subversion of or homage to a previously established genre. Thus, what Chen sees as a defect in the approach to character taken in House Of Flying Daggers and Hero, their supposed "lifelessness", where "the characters are . . . not really free agents or people but couture furniture items gliding along Zhang Yimou's pre-assigned tracks." This is, however, inevitable in all these second generation genres, where the characters and plots exist against a vast backdrop of historical genre knowledge that the audience has and the filmmaker builds upon. The characters in Hero are understood not simply in terms of the single film they're in, but in relation to the whole history of martial arts films (and perhaps just as significantly for that film, in relation to the careers of its lead actors, Jet Li, Maggie Cheung and Tony Leung).

Taken individually, any of the second generation genre films can be seen as lacking in character, or as a lifeless exercise in puzzle solving, and they offer suffer from that criticism. But despite the efforts of well-meaning critics pointing out the emptiness of these films, audiences still manage to flock to them and they inspire armies of devoted fans. I find these two facts difficult to reconcile. Few directors cause both as much critical animosity and audience love as Tarantino, why should that be? The easy way out is to say the other side, whichever side you don't happen to live on, simply doesn't "get" "it", whatever that means. The easier way is to accuse the other side of spurious motives, either fanboyism or jealous trollism.

I don't know what the right answer is, but I suspect it has something to do with a fundamental conflict in the approaches of auteurists (who examine a director's work in relation to the whole body of his work) and genre critics (who examine a director's work in relation to a wider group of films by a variety of directors). Ideally, both approaches should work together to create a full picture of the artist's work. That's generally the approach taken to John Ford and Akira Kurosawa, but unfortunately, I see few other directors get that kind of respect.
Posted by Sean Gilman at 4:18 PM No comments:

Your randomly selected poem for today is Shut Not Your Doors, by Walt Whitman.

Shut Not Your Doors

Shut not your doors to me proud libraries,
For that which was lacking on all your well-fill'd shelves, yet
needed most, I bring,
Forth from the war emerging, a book I have made,
The words of my book nothing, the drift of it every thing,
A book separate, not link'd with the rest nor felt by the intellect,
But you ye untold latencies will thrill to every page.
Posted by Sean Gilman at 1:54 AM No comments:

From William Blake, in honor of my newly delivered DVD of Dead Man.

THE VOICE OF THE ANCIENT BARD

Youth of delight! come hither
And see the opening morn,
Image of Truth new-born.
Doubt is fled, and clouds of reason,
Dark disputes and artful teazing.
Folly is an endless maze;
Tangled roots perplex her ways;
How many have fallen there!
They stumble all night over bones of the dead;
And feel—they know not what but care;
And wish to lead others, when they should be led.
Posted by Sean Gilman at 4:18 AM No comments: