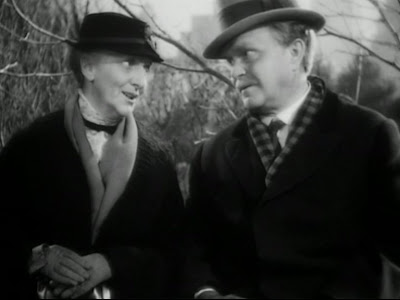 Make Way For Tomorrow - One of the most tear-inducing movies I've ever seen, extremely sad, but never depressing, if that's a distinction that makes sense. The theme is essentially the same as Tokyo Story, apparently Ozu's screenwriter, Kôgo Noda, was a fan of the film, though reportedly Ozu himself had not seen it. An elderly couple (the wonderful Victor Moore and Beulah Bondi) come to realize that their kids don't want them around when they're forced to move in with them after losing their house. They're separated by circumstance (none of the kids have room for the both of them), and eventually by a continent. It's never sentimental and never melodramatic, and Moore and Bondi break your heart as they accept their failures and warm it with the depth of the joy they find in each other. I don't know if it's better than the Ozu film, but it's just as perfect. The #1 film of 1937, ahead of The Awful Truth, also directed by the great Leo McCarey. 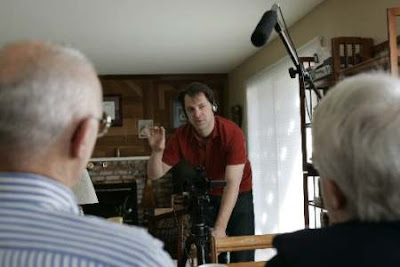 Dear Zachary - A deeply unpleasant film to watch, for a variety of reasons. First, and most obviously is the plot, in which the filmmaker chronicles the tragic circumstances around his friend's murder and the custody battle the murdered friend's parents fought with the accused murderer. This part of the story is both depressing as hell and strains harder to pull your tears than anything I've seen in awhile. Second is the filmmaking style: much of the film is made up of home movies, and the original material isn't much more interesting to look at, but that's mostly OK. The editing and soundtrack are hyperactively cut together, constantly underlining and all capping every emotion the filmmaker wants you to feel (and those emotions are very black and white: everyone in the film is great except for the villain, who is the devil or the government, whose side of the story (whatever it is) remains untold). Finally, the film simply made me feel very uncomfortable, not so much because it's "misery porn", but because of the voyeurism of it all. It felt like an overdose of reality TV, or those tragic memoirs that get featured on Oprah or Dr. Phil or something. I find that kind of thing deeply unsettling, which perhaps makes me strange, but I don't want to see strangers' home movies and I don't want to read their diaries. If the film was 15 minutes long, say a story on 60 Minutes or something, I probably wouldn't have had that objection to it. Or if it was a fictional story, I certainly wouldn't have. I don't quite understand why that is. Perhaps it has to do with the specificity and intimacy of the storytelling preventing the kind of abstraction or generalization or distance that allows me to relate comfortably to the narrative. The #62 film of 2008.
Posted by Sean Gilman at 12:17 AM No comments: 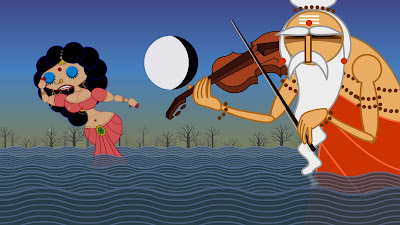 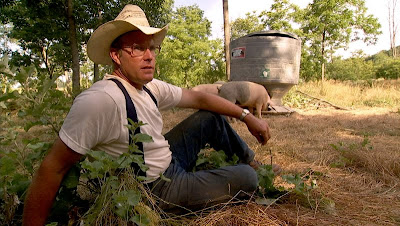 Food, Inc - Pretty much what you expect it to be. Though, it was nice to see it focus on the real bad guy in this area, corporate capitalism, as opposed to blaming meat-eaters or poor people who can't afford to eat better than fast food. The only real revelation was the guy who runs an organic farm. He, and his suspenders, were really cool. Otherwise it's just a better-looking version of those Robert Greenwald lefty documentaries. 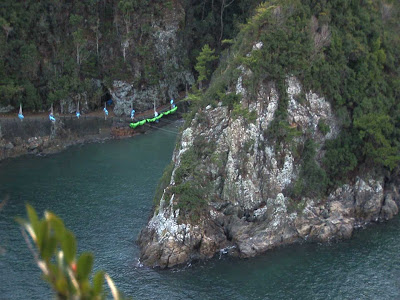 The Cove - Same with this doc, it makes an unassailably correct argument, though manages to only include the other side in order to knock it down. The story of Ric Barry's personal feelings of complicity in the dolphin craze, and his feelings of responsibility for it is quite moving, but the movie never feels like we're getting the whole story of just what he's done to get himself so ostracized. I suspect that a big part of the reason why issues like this have trouble getting addressed is because the people doing the arguing allow themselves to be so easily caricatured as hippie loons. This film does little to counter that idea. 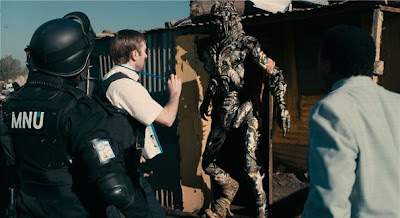 District 9 - A fine action film, notably mostly for its effectiveness on such a relatively low budget. Its vaunted social commentary amounts to little more than "hey these aliens in South Africa live in slums! In South Africa!" and the framing device of documentary-style interviews and found footage is undercut by so many scenes which aren't shot in that style. Compared with last year's low-budget action film, Cloverfield, District 9 falls short in its unwillingness to stick to the conceit it marks out for itself. Instead of increasing the immediacy of the action, it instead just feels like a (oft-used) gimmick.
Posted by Sean Gilman at 3:33 PM No comments:

Movie Roundup: I Haven't Skied in 25 Years, but that Downhill Course Looks Like a Lot of Fun Edition 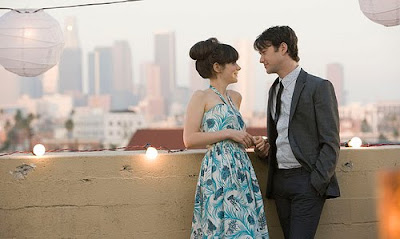 (500) Days of Summer - A very good romantic comedy that's a little too much indebted to every other romantic comedy since, well, The Graduate, but still plenty of fun. Joseph Gordon Leavitt sorts through his recently ended relationship with Zooey Deschanel, and the film flits back and forth through time in a wholly unnecessary manner (like in Eternal Sunshine but less interesting) as he tries to get over the relationship. The romance is effectively comedic and its actually kind of fun playing spot the reference (the film is so infused with Woody Allen films I was sure it was set in New York until a third of the film had gone by and even now I'm not so sure they didn't film it there and call it Los Angeles). I very much like the end, which is strikingly mature for a contemporary romantic comedy. The whole thing, in fact, feels like a breath of fresh air, unpolluted by the Apatovianity that has dominated the genre for the last five years or so (let alone the hideousness of the ones I can't manage to stomach the trailers for, which all seem to star Sandra Bullock). I wouldn't be insulting it to say it's the Singles or Reality Bites of its era. Not an all-time great film, but perfectly enjoyable. 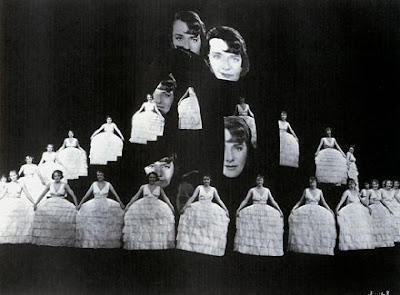 Dames - If such a thing as a by the numbers Busby Berkeley film is possible, this is it. There's a slight, but pleasant and occasionally funny plot about a millionaire's relative conniving to fund a broadway show. Dick Powell and Ruby Keeler do their thing (though Keeler's tap dancing is sorely neglected). There's a fine supporting performance from Zasu Pitts as Keeler's mother. The Berkeley numbers at the end are mostly underwhelming, except for an inspired section Keeler's image multiplies giving us dozens and dozens of Rubys. The film's most notable for introducing the song "I Only Have Eyes For You," which is one of the greatest songs ever and has been stuck in my head for the last week. The #17 film of 1934. 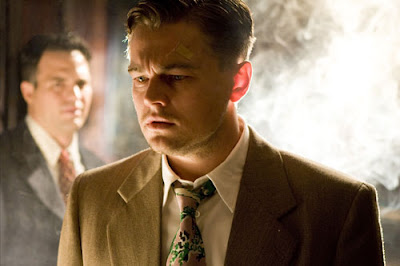 Shutter Island - I don't know how to talk about the plot without spoiling it, so I'll try to avoid that. Scorsese does a lot of really cool things to create a tense and unsettling mood, ranging from a dramatic classical, Kubrickian, score to some decent CGI create some wonderful effects with Robert Richardson's lurid cinematography to editing rhythms that are just a little bit off, a little bit out of continuity. The large cast filled to the brim with excellent actors does an excellent job, and Leonado DiCaprio not only gives his usually very good performance, he's also finally starting to show his age: for the first time I can recall, I actually thought he was a believable grown-up. The story's initially unsatisfying, but after a couple of days, I'm thinking it has enough depth that it actually manages to be something a bit better than simply the best Christopher Nolan movie ever. 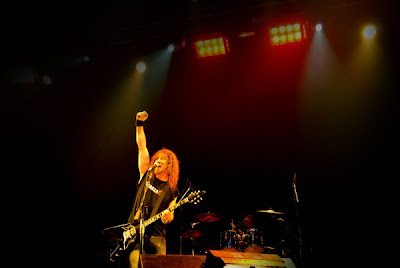 Anvil! The Story of Anvil - It's everything it has been reputed to be: a terrific story about a 30 year old metal band keeping their dream alive despite an almost complete lack of success. It's funny and moving and inspiring, but it somehow feels incomplete. One of the more interesting questions the film raises is why Anvil failed while their peers (the other metal bands of the 80s) succeeded? The film's too much in love with the band (and that's totally understandable, these guys are quite lovable) that it doesn't really want to address anything negative about them or their music. The #39 film of 2008.
Posted by Sean Gilman at 12:34 AM No comments: