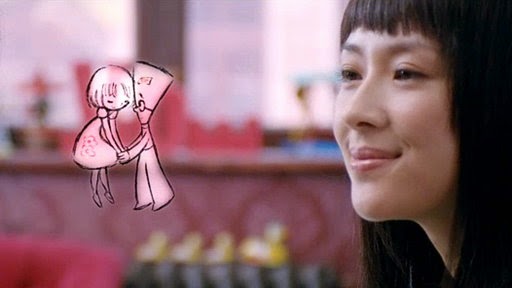 Zhang Ziyi is the manic pixie at the center of a swirl of CGI whimsy in this romantic comedy, which is weird because while she's no doubt a terrific actress, she'd previously shown no aptitude whatsoever for comedy. She fares OK all things considered, showing an admirable willingness to make a complete fool of herself, as her character is repeatedly subject to all manner of slapstick abuse (drunkenness, wall climbing sabotage, a gushing catheter), though she projects adorability more than charisma.

Zhang plays a comic book artist who is dumped by her boyfriend for a popular actress (Fan Bingbing). As she plots her revenge (win the guy back and then publicly dump him) she's helped by another guy, who falls for her. The plot is a little sloppy, and while initially enlivened by Michel Gondry/Scott Pilgrim/Pushing Daisies-esque animations and dream sequences, it becomes exhausting after the first hour or so, at which point the film kicks the plot forward with a series of unnecessary and confusing twists (at one-time her conspirator doesn't seem to know her plan, then does, and then doesn't again) and a lame reveal. It's a Skittles movie: looks tasty, but you don't want to eat the whole bag.

Zhang starred in a prequel (My Lucky Star) released last year. That film was directed by Dennie Gordon, an American TV director who also directed Joe Dirt and What a Girl Wants. The writer-director of Sophie's Revenge, Eva Jin, doesn't appear to have been involved in the sequel.

Watching this immediately after Sophie's Revenge was whiplash-inducing. That film is an international co-production set in a characterless, near invisible Beijing, a high concept, glossy stab at Hollywood style romantic comedy (with Zhang Ziyi channeling everything from Bridget Jones to Caroline in the City). Pang Ho-chuneg's romantic comedy, on the other hand, is a indie (or "indie") take on the genre, filmed seemingly on the fly in the alleys, cellphones and nightclubs of Hong Kong at the pace and rhythm of everyday life. Where Sophie's Revenge was a big hit, Love in a Puff saw its box office take suffer when it was given a Category III rating. Hong Kong's Category III is roughly a combination of America's R and NC-17 ratings. It's traditionally the home of porn and ultra-violence and horror. There's no such thing in Love in a Puff, which as far as I can tell got the rating simply because of its profane language, or in other words 'No other Hong Kong movies in recent memory give a more vivid sense of how Hong Kong people talk in real life.’ (Perry Lam in Muse Magazine).

The film follows the meeting and developing relationship of Cherie (Miriam Yeung) and Jimmy (Shawn Yue) over the course of a week. The two meet at a communal smoking area, Hong Kong having initiated an anti-indoor smoking ordinance, driving the tobacco addicts into the few remaining dark corners of the city. Pang intersperses short interviews with the various characters, in the style of TV mockumentary-style confessionals, but the bulk of the film is devoted to following the characters and the very small moments that lead them to fall in love. It's shot in the peripatetic style that's become international shorthand for Realism!, but with the off-hand kind of pictorial virtuosity that defines Hong Kong cinema. Where the images of Sophie's Revenge are pretty but artificial, manufactured, Pang's images are just as colorful, just as beautiful, but seem to arise, like the love story itself, spontaneously out of Hong Kong itself.

Pang Ho-cheung's sequel to Love in a Puff, released two years later but following the previous film directly. Cherie and Jimmy, after dating for some time, breakup and move, separately, to Beijing. There they strike up new relationships (Jimmy with a flight attendant played by Mi Yang (who looks so much like someone but I can't figure out who); Cherie with a very nice bald guy), but when they meet they're inevitably drawn back together.

While not as ground-breaking as the first film, both in the language (toned down) and the characters (inevitable, since we already know these two people so well), it is a step forward in filmmaking for Pang. Gone are the funny but otherwise obtrusive interview segments and the camera is a little more grounded. We do get some meta-comic guest appearances from Ekin Cheng, Huang Xiaoming and Linda Wong that are reasonably successful, but it's mostly the performances of Miriam Yeung and Shawn Yue that make this one so compelling. Yeung won the Best Actress Hong Kong Film Award for her performance, and Yue is just as good, with an understated, cock-eyed charm reminiscent of a young Chow Yun-fat.

Before watching these films, I'd known Pang only as the author of the novel that Johnnie To's Fulltime Killer was based on (he wrote it in his mid-20s). I'm putting him firmly in the Subject for Further Research column.
Posted by Sean Gilman at 2:34 PM