In his essential book Planet Hong Kong, David Bordwell examines a sequence in Peking Opera Blues where Tsui Hark deftly coordinates the movements of his actors as they try to remain hidden from an inquisitive father (three of them are in his daughter's bed and two of them shouldn't be, if I remember correctly). It's a short little scene, and Bordwell uses it as an example of the creativity of Hong Kong artists, how they're able to make an exciting and fun sequence out of almost nothing, budget-wise, and how Tsui's mastery of cutting and framing keeps the whole sequence light and airy. Shanghai Blues is essentially a feature length version of that scene. 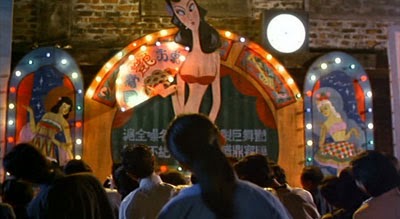 Set in the chaotic interregnum between the end of World War II and the end of the Civil War that would bring the Communists to power, Kenny Bee plays a veteran trying to make a living as a songwriter while searching for a girl he met only briefly, in the dark and under a bridge, ten years earlier during an air raid. He becomes entangled with his downstairs neighbors, Sally Yeh, a recent arrival who promptly has her pocket picked, and Sylvia Chang, a showgirl (who we know is the girl from the bridge). An early scene of Yeh and Bee just missing seeing each other as they do their roof-top laundry is compounded in the film's central, and most extraordinary segment, when Chang, to get out of the rain, goes into Bee's apartment to change clothes, but mid-change, Yeh arrives (she now has a crush on Bee) and so Chang hides in a closet. At the same time, the same pickpocket from early in the film is trying to rob the apartment and hiding from everyone else. Finally, one of Bee's pals shows up, so Yeh goes into hiding as well. Bee attempting to hide the two girls from the friend and from each other while the thief tries to hide from everyone. All in the confines of a tiny, cunningly laid out apartment to which Tsui has spent the first half of the film slyly orienting us. It's as remarkable a tour de force of choreography as you'll find in any kung fu film. 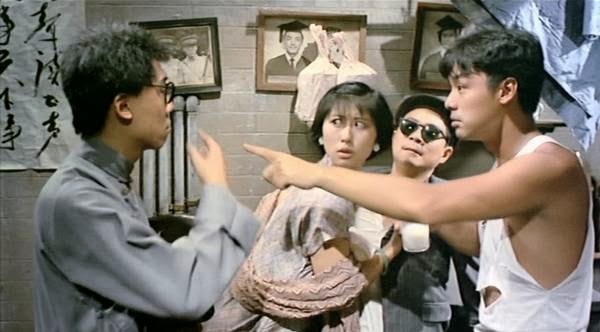 This kind of romance, where the two heroes can't see each other, though they occupy the same space (same frame) dates back at least as far as Paul Fejos's 1928 Lonesome, and Tsui appears to be specifically riffing on it. The early shot of Bee and Chang's separation in the crowd in particular recalls that film. Johnnie To's Turn Left, Turn Right, what I'd consider one of his most underrated films (even among his romantic comedies: I think it has a lower profile because it lacks any of his signature stars, with Takeshi Kaneshiro and Gigi Leung instead of Sammi Cheng or Andy Lau or Louis Koo), follows that tradition as well, even adopting Lonesome's conceit that the two destined lovers are unwitting neighbors. But I wonder if Shanghai Blues isn't the more proximate influence. In Lonesome, the heroes just miss each other through their parallel stories, but they rarely share the same filmic space. In Shanghai Blues, they're often in the same space, looking right at and not recognizing each other, while everyone else in the film seems to be actively attempting to avoid being seen by someone (a girl at the nightclub hides from a lecherous gangster, Yeh mistakenly joins a modeling audition and is appalled by people looking at her (when she later gets the job, she's mobbed by men everywhere she goes)). In the To film, no one is hiding, it is instead apparently chance and fate that prevents them from meeting, though through much of the film we see them together in the same frame. Tsui sets his avoidance dances in confined spaces (tiny apartments, dressing rooms), but To's is set out in the open: a fountain in a public park, a street corner, a sidewalk (a similar scene plays out early in Romancing in Thin Air, itself a kind of compendium of all of To's romantic comedies, where Sammi Cheng and Louis Koo wander outside the grounds of the hotel, oblivious to each others' presence). 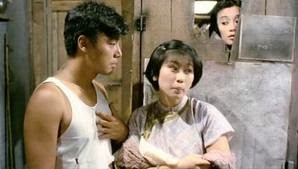 The three films are somewhat different in their thematic ends as well. Lonesome as all about the city, growing out of the city symphony subgenre of films in the late 20s, a time of rapid urbanization throughout the Western world, as people flocked from the farms and the countryside to new, anonymous urban centers, cut off from the family and communal structures that had supported their lives for generations. Turn Left, Turn Right is about chance and fate, the interplay of which forms one of the thematic cores of To's work, expressed across genres in romantic comedies and gangster epics alike (exploring the development of this theme is one of the ultimate goals of Running Out of Karma). Shanghai Blues seems to me to be about in-betweenness, about a world that's lost all its moorings, and the fear that what's to come may be even worse. It's about trying to keep your head down and get by, while dreaming of being a star. There doesn't seem to be any metaphysical element to Tsui's work; To and Wai Ka-fai have a spiritual preoccupation I've yet to identify in any of Tsui's films. Peking Opera Blues ends with its heroes, having saved the day, riding off saying they'll meet again soon, though we know the contingencies of the wars make that extremely unlikely. Similarly, as two of the heroes here leave Shanghai for Hong Kong, while the others stay behind, we know they too will never meet again. Just another pair of couples lost in the churn of history. 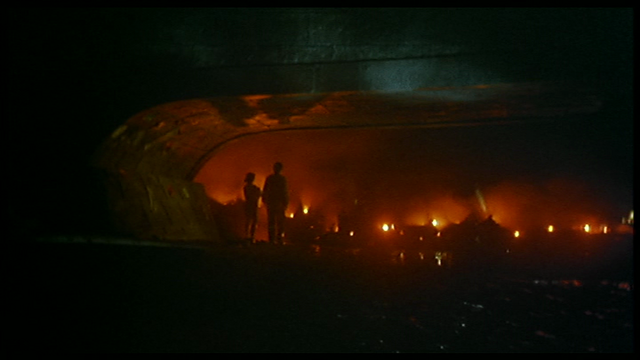