I had underrated this before. Sure, the ballet at the barn-raising is arguably the greatest group dance in Hollywood history (the only other real contenders are probably from West Side Story), building a traditional minuet ever faster into a gymnastic competition, but it's immediately followed by a very well-choreographed (for Hollywood at the time) fight sequence. Director Stanley Donen fills the Cinemascope frame with professional dancers, long takes and long shots that display both the skill of the performers (how fast and in sync they are!) and the intricacy of Michael Kidd's choreography. I long for the days when dancing like this is again valued in Hollywood filmmaking, when the Rob Marshalls of the world are no longer allowed to pass off quick cuts of incompetent body parts as musical numbers. This middle section of the film concludes with a kind of slow-motion dance, as the six brothers sing about loneliness on the farm while listlessly doing their chores (the axe chops and wood saws of which provide rhythmic punctuation to the song, "Lonesome Polecat"). All that is pretty much perfect. It's the first and final third I'd never cared for in the past. 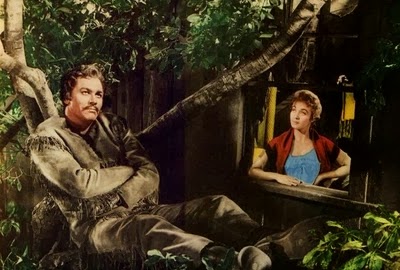 Howard Keel, I've decided, is an acquired taste. His chest-first, hands on his hips acting is the very definition of pompous, and his singing strikes modern ears as overly formal, a resonant bass-baritone that says "Listen To Me! I Am Singing!". I'd always found him to be absurd, especially as a kid when my mom would try and make me watch his movies. But look closer and you see that again and again, his musicals are built around the puncturing of that very pomposity, that he is meant to be a ridiculous figure, a parody of masculinity (see for example, George Sidney's film of Cole Porter's sublime Shakespeare inversion Kiss Me Kate). So it is here, as he plays the backwoodsman come to town to find a wife, which he does in a single afternoon (Jane Powell). Only on their arrival at his remote ranch does she begin to understand his regressive view of marriage, as he introduces her to his six brothers and announces that she is expected to do the cooking and cleaning and sewing and everything else for them all (not a wife, but a housekeeper).

Powell, though, quickly undermines him. First by kicking him out of her bedroom (though she later relents, for she is allowed to desire him: in fact, the men in the film are as much if not more objectified than the women), and then by civilizing his brothers. She makes them shave and wash and wear clean, brightly colored clothes (a different color for every brother, to help us keep them straight). She bans physical violence and teaches them to dance and court ladies. Which they do at the barn-raising (note how the townswomen are immediately attracted to them, so much taller and prettier than the gray and earth-tone clad townsmen).

It is here that Keel reasserts his backwards mentality, inciting the brothers to violence which leads to their dismissal from the community and separation from the women they are all by now deeply in love with. Then, in a demented perversion of Powell's civilizing influence (she's been exposing him to literature, specifically Plutarch's Lives), he inspires them to reenact the Rape of the Sabine Women (albeit without the rape of course) and kidnap the girls. For this, Keel is soundly admonished by Powell and rather than submit to her will, he exiles himself from the home. The girls in turn exile the boys to the barn for the winter and turn the home into a haven for feminine domesticity (they sing songs and dance in their underwear, as we all know girls do whenever they get together). As the winter months wear on, the girls' rage diminishes thanks to the demands of simple lust, and by the time spring arrives they're willing to marry the boys.

What to make of this? It's telling that Keel is twice removed, both from the town (a rugged individualist, he lives far away from civilization) and then from his wife and family (his stupid disregard for women's rights gets him banned from the domestic sphere). It is only after Powell gives birth to a daughter than Keel returns home, pointedly not at Powell's request, but on his own. His ideas are simply not acceptable, either in society or the home. And it's only the draw of fatherhood that "tames" him and brings him to submit to domestic order.

As for the kidnapping, there is a certain element of Stockholm Syndrome to the girls' deciding to forgive the boys, but I think the more interesting angle is that the women are driven by physical desire for the men, while the men (Keel the hyper-masculine especially) are driven by the material comfort provided by women, an inversion of the usual dynamic whereby women are valued for their attractiveness and men for the security they can provide. I'd still hesitate to call it a progressive film, because of the ultimately limited agency the women are allowed (though that may as much be a reflection of society than an endorsement of it), but this is a much more tangled, much richer film than I'd ever noticed before.