Summer of Sammo: Encounters of the Spooky Kind

Sammo Hung plays a regular guy whose reputation as the boldest man in town makes him susceptible to all kinds of dares, leading him to an escalating series of encounters with the dead in this smash hit, one of the first major films to combine kung fu, horror and comedy. A Mr. Tam, a leading citizen of the town, is sleeping with Sammo's wife and decides to get rid of him to cover his tracks. So he hires a renegade Taoist priest who has the ability to control the dead to kill him (by daring Sammo to spend the night in a temple holding a coffin). A fellow priest hears about this violation of Taoist beliefs and helps Sammo out, giving him instructions to counteract the killer corpses.

The first night, Sammo tries to hide from the corpse, which hops around like a bunny, unable to bend at the knees or elbows, it's arms held out straight like a parody of Frankenstein's monster. The second night, Sammo tries to keep the corpse in its coffin by throwing eggs at it when it tries to pop out. But he's double crossed (some of the eggs are duck instead of chicken) and has to fight the corpse. This is the first real kung fu fight in the movie and it's hilarious: the corpse's stiffness making it look like a breakdancing robot. The third corpse Sammo confronts is accidental: after spending the night sleeping next to it (Sammo's on the run from the cops after being framed for murder), it begins to mirror his movements. The result is a variation on the classic Marx Brothers gag, seen in Duck Soup, with Sammo trying to trick the corpse into beating itself up ("this corpse is too smart for me," says Sammo.)

The second half of the film finds the priests taking a more direct role, employing a Taoist version of voodoo to take control of unsuspecting humans (this kind of 'Spiritual Boxing' was the subject of a 1975 Lau Kar-leung film). A teahouse showdown begins with Sammo losing control of his right hand, a sequence that surely inspired Sam Raimi's Evil Dead. What follows is a spectacular kung fu fight, with Sammo showing off his otherworldy agility and speed taking on four swordsman armed only with a wooden bench, like an extended, souped up version of the fight from the end of Warriors Two. The fight ends with a Chaplinesque touch: Sammo defeats the swordsmen, twirls the bench around and places it on the ground. He crosses his arms with a satisfied grin and sits proudly on the bench, which immediately collapses, sending Sammo sprawling to the floor. These kind of silent comedy-inspired beats at the end of fights would become a Jackie Chan signature.

The film ends up in a rather disturbing place, evincing Hung's penchant for mixing moods (as in Eastern Condors). The two priests meet for a final showdown, preparing their respective altars ("when two sides are evenly matched, whoever has the higher altar wins" is the film's most important life lesson, as the priests position their altars on 30' platforms) and raising spirits to possess various proxy fighters. Sammo, inhabited for a time by the monkey god, has his showdown with Tam. The good priest incinerates the bad one (in a spectacular, and what looks to have been highly dangerous, fire stunt). As the good priest falls, exhausted and injured from his altar, Sammo rushes to catch him. . . and just misses, an unexpected and darkly funny comic twist and the perfect place to end the movie. But then Sammo's wife rushes out, pretending to have been a victim of Tam, kidnapped by him and held against her will. But instead of a goofy happy ending, with cuckold and wife reconciled, or even a darkly comic one with Sammo telling her off and sending her away, what we get is truly scary. Sammo grabs her, beats her repeatedly and throws her in the air. The final shot is a freeze frame of her flying, the shouted word "Bitch!" lingering in the air. It's not funny at all but creepy and more than a little misogynistic. Sure, she cheated on him, but the punishment seems far in excess of her crime. Like the ending of Jackie Chan's Police Story, where the nice guy cop, finally pushed to far, beats the crap out of an unarmed, surrendering criminal, the movie exposes a real aggression, a violent core to these martial artists. There is a darkness in Sammo Hung. 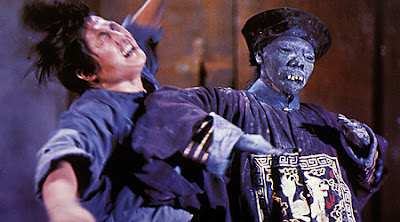