Summer of Sammo Bonus: On Tsui Hark's The Butterfly Murders

Tsui Hark's audacious debut film is a horror mystery about killer butterflies that has more in common with Roger Corman or Dario Argento than the Shaw Brothers. It begins with a lengthy narration, describing how the world came to an end in two battles where most of the martial arts masters were killed (100,000 people died at the foot of Wu Tang Mountain). Now, 60 years later (a 36 year quiet period, followed by 24 years of the New Era, the numbers mean. . . something) the world is divided into 72 clans at war, jockeying for position amongst each other as kung fu magic begins to reappear on the outskirts of society. The narrator is a famous scribe named Fong, and he'll tell us the story of how he briefly became a part of a story about this wuxia world.

Various people are brought and/or lured to a recently abandoned castle belonging to a Mr. and Mrs. Shum. There's Fong himself, the leader of the Tien clan along with several of his soldiers (they're all numbered: the leader is No. 1 and the groups with him are a white unit led by No. 3 and a red one led by No. 10, a woman), and the female adventurer Green Shadow, who dresses and swings through trees like Robin Hood. They find the Shums, along with their deaf mute servant Chee, in the castle's catacombs, apparently hiding out from a deadly butterfly attack that killed all the other residents. What follows is a kind of haunted house movie, with hidden passageways, mysterious rooms and doppelgangers to be found. The mystery is compounded when Shum is killed (by the butterflies) and a letter is sent to three martial artists, who arrive and begin fighting each other and everyone else, apparently in search of some even deeper secret.

Tsui's visual approach is highly unusual for a kung fu film of the 1970s. Eschewing the long-shot, longer take style of most Shaw Brothers productions, Tsui instead rapidly cuts between closer shots, especially in the beginning of the film, filled with nature shots of butterflies in the wild. The inevitable fight scenes are spatially coherent, though, and the editing is not all that quick by the standards of modern Hollywood. At times the montage evokes the impressionistic editing Nicolas Roeg used in the late 60s and early 70s. Tsui’s modernism extends to his compositions as well. One scene shows No. 1 and Green Shadow talking one behind the other, her facing to the side while he faces the camera, focus shifting between them as each character talks rather than cutting between them (an instance of Tsui choosing mise-en-scene over montage). A shot like this wouldn't be out of place in a Bergman or Antonioni film, but I've never seen anything like it in a Hong Kong from this era. Tsui often has Green Shadow popping out of unexpected places in the frame. In her early conversations with No. 1, he never seems to know where she is, and neither do we. Right from the beginning, Tsui primes us to expect the unexpected. And as with any great horror movie, archetypically scary images abound: butterflies gathering in the branches above grave robbers like Hitchcock's ravens, a man seeing the silhouettes of hundreds of butterflies through the paper walls of his room, a villain clad head to toe in black armor, impregnable and killing everyone in his path. 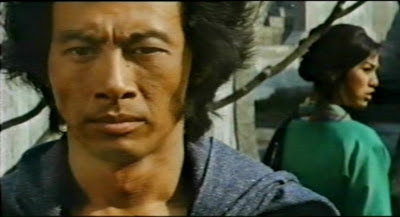 With about 15 minutes left in the film, Fong has solved the mystery and explains it to the audience. It won't spoil anything to say that he's pleased the Art of Controlling Butterflies has come back into the world. After the apocalypse, Fong gets to see the return of magic and is tickled at the role he gets to play in describing it in words. At that point, Fong leaves the castle: the whodunnit and why is solved and he isn't particularly interested in how the final battle will play out. We see the implosive four-way showdown, but since Fong is our narrator, we can't be sure if what we're seeing is 'real', or if it's Fong's imagining of what happened after he left. Either way, it’s a negating conclusion: both sides destroy each other, the ground collapsing and swallowing them whole. Whether it’s the death of the interregnum, to be replaced by the old magical order, or that old order being defeated by its own contradictions before it can be fully reborn we can’t know. The final image we're left with is of Fong walking alone in a desert landscape, discovering himself among a battlefield of corpses. He catches a butterfly in his hand and lets it fly away.
Posted by Sean Gilman at 10:04 AM