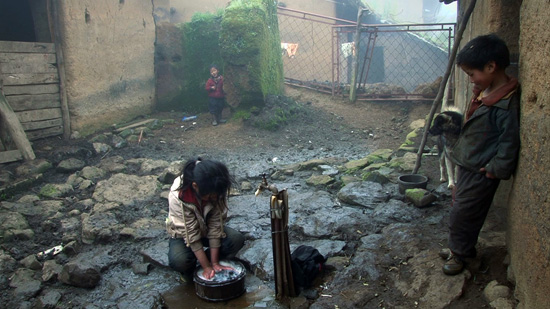 By nine o'clock on Tuesday, October 5th, my VIFF experience was four days and fifteen movies old.  I trepidatiously settled in for movie #16, a two and a half hour verite-style documentary about three poor kids in China by acclaimed director Wang Bing (his nine hour documentary West of the Tracks recently tied for 202nd place in the Sight & Sound poll with Manhattan, Cleo from 5 to 7, The Shop Around the Corner, WALL-E, Badlands and There Will Be Blood, among others), wondering if the onslaught of reality, old age and festival-induced sleep deprivation would knock me out.  I armed myself with a "litre" of Mountain Dew and a pack of gummi bears, and when Wang himself, there for a post-show Q & A that would push the night into the morning, wished us all luck in staying awake for his movie, I had a feeling things would work out alright.

The experience of watching the film is much the same as that of any other so-called "Asian minimalist" movie, like something by Tsai Ming-Liang or Jia Zhangke.  The pace is very slow, not a whole lot happens in the long, single-take scenes, and enjoyment of the film depends on one's interest in watching other people do normal boring things (basic tasks like making soup or cleaning shoes) and also in the willingness to let one's mind wander.  These types of films are meditative not because they make you think but because in their opiated snail's pace, they allow you to think.

Various more or less coherent things I thought of while watching this film: what this country needs is a rural electrification project like the one that lifted much of America out of exactly this kind of poverty in the mid-20th Century, Mao's mid-century reforms had exactly the opposite effect (later in the film, they do appear to have electricity and television, and I may be exaggerating the effects of the New Deal in the US, but still); How do you document the lives of the poor without being exploitative or dilettantish? Is that  just a First World Problem?; The best way to tell if a country is developing economically is if they start making documentaries about poor people; The village is situated high in the mountains near what appear to be run down and out-of-use terraces, I wonder if those terraces are ancient ones that were abandoned in misguided communist land reforms (that led to mass deforestation and erosion), or if they are themselves the misguided reforms.  Either way, they're being used as sheep food on a wind-scorched landscape now; If this film were sub-titled The Shit Collectors of Yunnan, would that increase its box office?; Can a film be beyond criticism? Does talking about a film like this as a film trivialize its very serious subject, or is the act of making a film about such a subject necessarily trivializing?; Does Truffaut's assertion that it's impossible to make an anti-war film apply to anti-poverty films?  Does filmmaking in some ways glamorize poverty?

Three Sisters is about three very poor girls who live in a remote mountain village in Yunnan province.  The environment is perpetually damp and foggy, but the kids don't seem to mind too much (when they're gathered around a fire drying one of their mud-encrusted shoes, one of them cheerfully exclaims "today we'll dry your shoes, tomorrow mine!"  Similarly, when checking each other for infestations in what appears to be a nightly ritual, we hear the joyous shout "I found more lice!").  Their father is away, looking for work in the nearest city, the kids are staying with their grandfather in the village (the mother appears to have run off? I don't really remember).  We follow them through their various rural tasks (one of them greets another working child in a pasture with a matter of fact "everyone's out collecting dung today").  They don't seem especially miserable, but neither do they seem particularly happy.  They live in a half-modernized world: they have TV and locks on their doors, but little of the labor-saving comforts of the 21st century.  Missing from most of the film are the communal aspects of village life: festivals, religious ceremonies, weddings, funerals, birthday parties, games, storytelling, all those things we lament as lost and celebrate in John Ford films.  Near the end there is an autumn feast at the girls' uncle's place in a neighboring village that packs dozens of people into a tiny house for tons of (delicious looking) food and an impromptu political meeting.  It's not especially cheerful, but at least it looks warm.

The oldest sister, ten-year old Ying Ying, comes across as a truly heroic figure.  She appears to do most of the farm work (sheep and pig herding, milking, dung-gathering, potato-planting, etc) and takes care of her younger sisters (cooking, cleaning, etc).  She simply does what she has to do.  On the rare occasions she gets to attend school she leans far forward over her desk, straining to take in all she can from her teacher, unable to prevent her desperation to learn from taking physical form.  Wang encourages us not to look at the film as a political statement ("oh isn't poverty so awful") but as a story of Ying Ying's heroism (not that that will get his movie shown in China, but his point is a good one regardless).  She does it all but she doesn't suffer, she inspires.
Posted by Sean Gilman at 8:20 PM