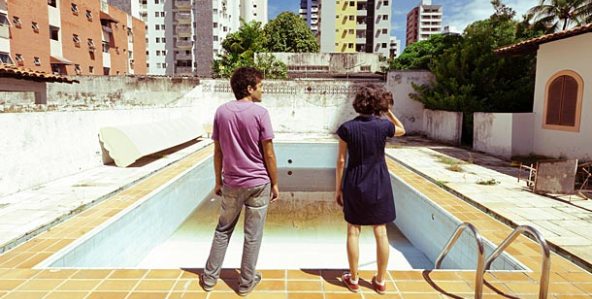 Kleber Mendonça Filho directs the fourth film in what turned out to be a surprisingly strong showing for the Portuguese language at this year's festival, along with Reconversão, Tabu and The Last Time I Saw Macao.  Three of those focus on the remnants of the Portuguese colonial experience on other continents (Tabu in Mozambique, Macao in China and this one set in Recife, one of the largest cities in Brazil).  In many ways, this is the most conventional film of the bunch, a familiar-seeming network narrative of a few weeks in the lives of the residents of a particular street in a relatively affluent area of town.  As usual, there's a multitude of tensions bubbling under the placid surface, along class and racial lines as well as the requisite secrets from the past haunting certain folks.  For most of the film's running time, that tension remains constant but unrelieved, it's only in the final scenes that some actual violence bursts forth, unfortunately in a bit of an anti-climax.

The most interesting thing about the film is explicitly stated right there in the title: the sound design.  Though the film is set in a few houses and an apartment building on what appears to be a single street, we never get a clear layout of the neighborhood.  It's disorienting visually, but the sound design knits the space together.  Sounds from one area are constantly bleeding into another, kids playing, dogs parking, cars passing by, the on-screen space is always filled with off-screen sounds.  This is how the neighborhood is experienced: not as a community where everybody knows everybody (all the community gatherings end in disaster, first a hilariously petty condo board meeting, later a birthday party) but as an occupied space that is forever invaded by outsiders' noise (this is literalized in a zombie-invasion like dream sequence).  The two characters we spend the most time with, a handsome, charming rich guy named João who lives in the high rise and a housewife who buys pot from the water delivery guy, has an affair with her washing machine's spin cycle and is tormented by the barking dog next door never actually meet.  Their storylines merge somewhat at the end, but only aurally, never visually.

The individual characters do have storylines of their own, but they aren't quite as conventional as in a network film like Magnolia or Short Cuts, which follow the series of short stories model.  João's story is my favorite: he falls in love with a woman, they hang out together, they take a trip out of town (the only time we leave the neighborhood) and wander around his grandfather's estate and its village, walking through the ruins and hearing the sounds of the past (people chattering, a movie-projector humming).  But Mendonça Filho even trips us up there, as the romance plot is resolved entirely off-screen, leaving João to briefly tell another character how it ended.  The film is full of these little bits of rug-pulling that keep the viewer perpetually off-balance.  If the film had left is in that state it would have been great.  Instead, the film wraps things up with a bang in a more or less neat bit of narrative balance.  I want it to end just slightly earlier, just before the crescendo peaks, leaving us forever on the edge of the crash.
Posted by Sean Gilman at 9:19 PM