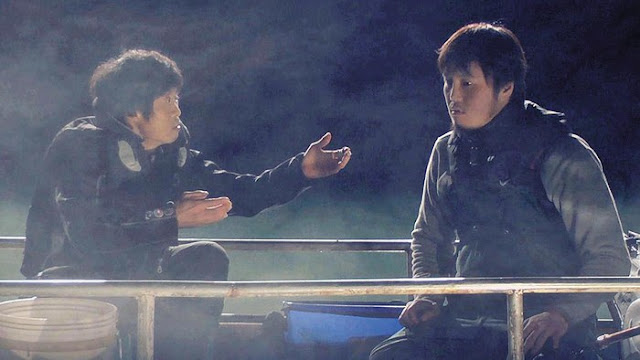 The second film I saw in the the Dragons & Tigers competition comes from South Korean director Park Hongmin, who used some homemade digital wizardry to make it in 3D, though unfortunately we were unable to see that version here (though we are assured it looks great).  It's an off-beat story about a professor who tracks down his wife with the help of a disreputable detective.  Seems the wife has run off to Jindo, an island that is home to an ancient religious order: the wife is going to become a shaman.  The film opens with a nice long shot that sets the disorienting tone for what is to follow: first we see a quiet pastoral landscape that is shattered when a hand knocks on the frame revealing the scene to be a reflection in a car window.  As the window rolls down, a street scene is revealed, not only are the reflection and reality opposed, but so are nature and civilization.  Park will keep us on our toes for the course of the film, as reality will always be shifting under our feet.

The central metaphor of the film is a shamanic ritual wherein stuck souls are fished out of the sea so they can continue their way on through the afterlife.  There's a series of funny interludes in the film focusing on two fishermen on a fog-enshrouded boat.  At first their conversation revolves around typical fishing topics: how to fish and the meaning of life ("Why do the fish take the bait?" "Some of them think the bait will take them to a new world." Fish cultists believing in the Hook as the Rapture, apparently).  Eventually, after an encounter with a talking fish, they begin to question, like the main characters of Rosenkrantz & Guildenstern are Dead, how exactly they got on the boat in the first place.  Unlike in Tom Stoppard's play, however, the question isn't a meta-fictional one but a spiritual allegory, enmeshed in Korean Buddhist and shamanistic traditions.

Eventually, as twists and realities pile onto one another, it becomes hard to follow the thread of causality.  Exactly who is dead and who is alive and how they got that way doesn't exactly come together in a particularly explicit way (or if it did, I didn't quite catch it).  But that's not to say the film isn't coherent.  On the contrary, it makes absolute emotional sense. The tragedy of death and the weird and wonderful ways we cope with it.
Posted by Sean Gilman at 2:13 PM