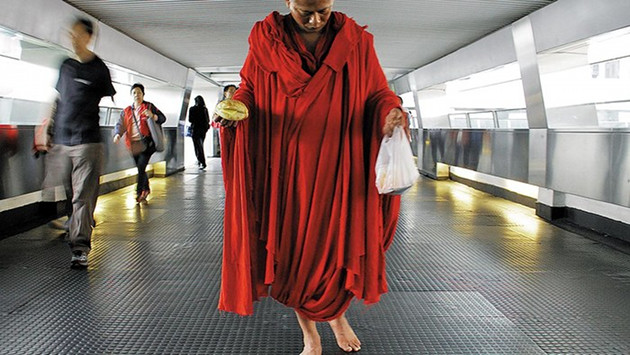 This terribly-titled omnibus film collects four shorts from directors from four East Asian countries commissioned by the Hong Kong Film Festival.  The films are much longer than the ones in the other collection I've seen here, 10 + 10, running about 20-30 minutes each.  Also unlike that film, there doesn't seem to be a real unifying theme behind the works ("Beautiful" is not a theme, and even if it was, it's a stretch to apply it to a couple of these). The first film, You are More than Beautiful comes from South Korean director Kim Tae-Young.  A variation on the plot of Buffalo 66, it's about a guy who picks up a girl (a hooker?) to pass off to his father as his fiancée.  Unlike Vincent Gallo's film, however, the father is dying and when the couple arrive at his hospital he's in a coma.  The guy pays the manic pixie girl off, but she sneaks back into the father's hospital room, packed to the gills with similarly dying old men, and starts talking to him.  Then she bursts into an impromptu aria from a Korean opera.  It's silly, but it totally worked for me.  I'm a sucker for these kooky girls that break into song.  Kim's direction is crisp and unassuming.  I'm curious to see one of his features.

The second short in the film is easily the highest profile, Walker by Tsai Ming-liang, his first film since Visage, which I saw back at VIFF 2009 (and which my wife almost walked out of).  It's been awhile since then and I don't quite remember how it ends, but apparently Lee Kang-sheng, the star and main character of all Tsai's films, is now a monk, and this film is the chronicle of his walking, very, very, verrrrrry slowly through the city.  It starts with him exiting, one minute movement at a time from a stone staircase, out of the past, into the bustling sidewalk.  There follows a series of still shots (Tsai of course doesn't move the camera) with Lee seemingly in slow motion while the city moves on around him.  It's like the shot in Chungking Express where Tony Leung and Faye Wong are in slow motion at the lunch counter while the passersby move in blurs around them.  At first, people don't seem to be paying much attention to the monk, there's a scene in a square with a woman pounding something and chanting while passersby take her photograph and ignore the monk in their midst.  Later though, there's a long shot of the monk moving down the street while crowds gather and watch him and, more interestingly to them apparently, photograph Tsai's camera crew.  The space around the monk is open, the crowds keeping their distance as he forms an oasis of stillness in the middle of the city.  Later an ice cream truck plays a tinkly version of a Strauss waltz as the monk walks by, decidedly out of time with the tune.  One overhead shot includes an apartment window filled with an aquarium, much like the one in Lee's parents' apartment in Tsai's other movies.  He's glimpsed in the space between buses; he moves out of focus past a giant crystal clear advertisement.  Occasionally it can be hard to pick him out of a long shot until you realize that he's the thing that's not moving.  It is, perversely enough, Tsai's fastest-paced film, the editing more rapid than anything I've seen from him before (though the shots are still much longer than the typical film).  Eventually, Lee comes to a stop, his path has lead him to a door that prominently declares "No Entry".  Finally he slowly raises his head and slowly takes a bite of the egg mcmuffin he's been slowly carrying for a day a night and another day.  Looks like it tasted great.

The third film is by Chinese director Gu Changwei and I can't say I liked it much at all. Seemed to me like a compendium of the worst art house clichés.  There's even a slow motion shot of a cat meowing, like something out of an SNL parody video.  Maybe it just had too much going on after Tsai's sublime minimalism.  But the fourth film, My Way, by Hong Kong director Ann Hui, is very sweet.  Francis Ng plays a transgender man about to go in for his sex change operation.  We see him going out to the movies, hanging out with his friends and arguing with his ex-wife.  There's a brief flashback to their fight after she figures out his situation, and so a very real sense of relief and joy when she shows up after his operation to wish him well.  The subject is an under-discussed one in the Chinese-speaking world, even more so than it is here.  But Hui manages to tell this simple, humane story with warmth and, well, beauty.
Posted by Sean Gilman at 5:52 PM