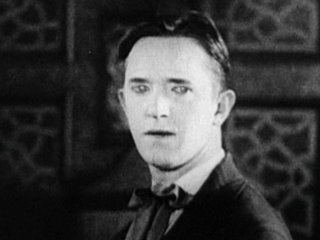 This is the first real showcase in the series for Stan Laurel.  He was pretty good in Duck Soup, but he and Oliver Hardy were together in almost every scene there and in was their interactions that made it work.  They both appear in this film, and again have some great comic moments together, but Laurel is also given a solo showcase where he gets to display the physical comedy talents that made him a star in the first place.

The film is a star vehicle for Priscilla Dean, a major star at Universal in the late-teens and early 20s who had faded into two reelers for Roach by 1927.  Laurel and Hardy are the next billed, followed by Herbert Rawlinson, an actor whose career began before World War I and ended with Ed Wood in the 1950s.  It's a fairly typical farce scenario where Priscilla hires Laurel's paint salesman to help her make her husband (Rawlinson) jealous. Hardy plays the butler who takes an immediate dislike to Laurel.  Most of the comedy is built around Laurel mistaken a family friend for the husband, and thus doing all his flirting when the husband isn't looking.  The highlight scene for Laurel is when he's asked about his latest novel (he's posing as a famous author) and he demonstrates the story of Samson and Delilah.  Laurel started out in British music halls (he was for a time Charlie Chaplin's understudy, when Chaplin toured America for the first time, Laurel was part of his troupe) and he here gets to display a Chaplinesque pantomime skill, an ability I didn't know he had before watching these movies.  I assumed his genius was more for the construction of anarchic comedy sequence, slow burns to chaos, but he shows here a real talent for the more balletic forms of comedy as well.
Posted by Sean Gilman at 11:12 PM