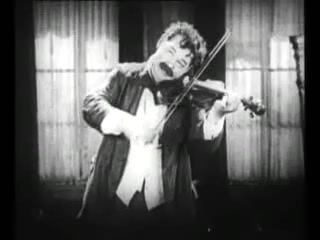 The second film in the set again features only Oliver Hardy, though Stan Laurel is credited as a writer.  The film stars Glenn Tryon, who'd I'd never heard of but who managed to have a long, if undistinguished career in Hollywood as an actor, writer, director and producer.  Vivian Oakland plays a divorced woman who takes her first husband (Hardy) in as a border to raise some extra money.  When her wealthy aunt, who doesn't know about Oakland's divorce, and is strongly opposed to divorce on principle, comes to visit, Oakland and Hardy must pretend to be married (with her second husband (Tryon) posing as the border) in order to not jeopardize her inheritance.  Slapstick ensues, with much foolishness and each of the male leads dressing up as each other and Oakland at various times.  Hardy himself is a blast, at his best as a violently energetic musician, but Tryon and Oakland are pretty bland and the film as a whole is pretty rote, despite the weird potential of its premise.
Posted by Sean Gilman at 10:39 PM