You'd have to go all the way back to 1983 to find a year where I saw as few films as I've seen from the year 2000. This was the year I started dating my eventual wife, graduated college, started working full-time and moved away from all the cool movie theatres. Plus, it wasn't a very good year for movies, with only one true classic. 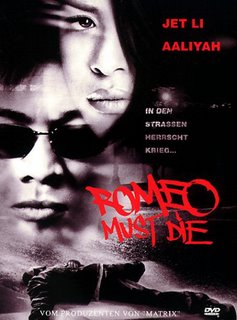 15. Memento - As I mentioned in the 1999 list, I'm not a big fan of trick movies, and this one is a prime example of that genre. It's very well-made, with good performances from Guy Pearce and Joe Pantoliano. The backwards running narrative thing is pretty cool, but I've never seen the reason to watch this a second time. I was annoyed that when it came out nobody seemed to mention that it was essentially a noir remake of the classic Dana Carvey comedy Clean Slate (#40 in 1994), only without Valeria Golino and the one-eyed dog.

14. Jeff Buckley: Live In Chicago - This concert film looks like it was shot on video for a local PBS station. There's nothing interesting about it cinematically, what makes it worthwhile is Buckley himself. It's a long and great show, really demonstrating what made Buckley such a great singer. If you're already a Buckley fan, you'll love it. If you've never heard him, you'll still love it. The concert isn't as good as the one on the Live At Sin-é album, but it's still great.

13. X-Men - Like most of the superhero movies of the 90s, this is very slick but lacks soul., it's like candy. I was a huge fan of the comic book as a kid, so it'd probably be impossible to make an X-Men film that'd make me happy, but this does a decent job. Hugh Jackman is a pretty good Wolverine, Famke Janssen is a great Jean Grey, Patrick Stewart Rebecca Romijn and Ian McKellen are great and James Marsden is just as annoying as the Cyclops character was in the books. I like Anna Paquin a lot, but her Rogue really annoyed me, but that's the fan in me, her character is totally different than in the books. Overrated, but still good.

12. Battle Royale - I admit I was a little disappointed in this Japanese action film. It's set in a vague future where problem high school students are exported to a wilderness where they are made to fight to the death until there's only one left. I was looking forward to seeing Chiaki Kuriyama, who was great as Go-Go Yubari in Kill Bill, and she is very good, but not a big enough part of the movie. It also stars Takeshi Kitano, whose very different film Fireworks I liked a lot and rated #19 in 1997. Pretty good, but ultimately really depressing. 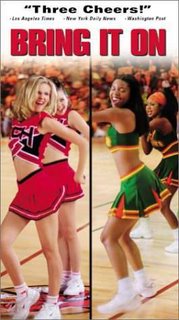 11. Bring It On - Without a doubt the best movie about cheerleaders ever made. The rich white cheerleaders, led by the very perky Kirsten Dunst, learn that all their best moves were stolen from the black inner-city cheerleaders. Dunst must scramble to come up with some moves of her own, with help from the new girl Eliza Dushku, as the rich kids new competition is that same inner-city black high school. It's the Karate Kid with really short skirts. What's not to love?

10. Chicken Run - The Great Escape reenacted by a flock of claymation chickens: pure genius. It's the same guys that made all the Wallace And Gromit movies which unfortunately were too short for me to include in my Movies Of The Year lists. Not just The Great Escape, but the movies chock full of movie references like the Indiana Jones movie and Braveheart. The movie stars the voices of Mel Gibson, Miranda Richardson, Timothy Spall, Imelda Staunton and Jane Horrocks.

9. The Beach - A Danny Boyle movie that people hated even more than A Life Less Ordinary, this film was killed in the public imagination by two things. First, the rumors that the production caused an environment catastrophe on its location in Thailand, which convinced all the lefties to hate it. Second was the massive success of Titanic (#11, 1997) and the cooptation of Leonardo DiCaprio by the teenage girl marketing machine. With 5 years of hindsight and Martin Scorsese's concerted effort to make him into his 21st century DeNiro, we can see that it was Titanic that was the anomaly in an otherwise extremely respectable acting career. In another five or ten years, he might even be able to shed his teen idol image, like Johnny Depp managed to do eventually. Judged on it's own merits, The Beach is a flawed film. A rather incoherent mess of interesting ideas and good performances. Leo plays a hipster burnout how finds a map to a beach where other freaks have established their own little society outside the rest of the world, with Tilda Swinton as their leader. There's the inevitable romantic entanglements between Leo and every girl he meets, and some perfect-society-gone horribly-wrong craziness as Leo goes nuts and imagines himself as a video game character. An interesting mess.

8. High Fidelity - Well, it's not as good as the book, that's for sure. But that may be overly harsh. John Cusak is perfect for the part of the music obsessed romantic loser, as is Jack Black as his even more music obsessed friend/employee. It's directed by Stephen Frears, who did Dangerous Liaisons (#1, 1988), The Grifters (#26, 1990), and Mary Reilly (Unseen). The rest of the cats includes Tim Robbins, Catherine Zeta-Jones, Joan Cusak, Lisa Bonet, Natasha Gregson-Wagner and Lili Taylor. Frankly, while I enjoyed the movie, I would have liked it a lot more if I hadn't read the book first. I don't think I can really judge it on it's own merits. I really should see it again.

7. Best In Show - Not as good as Waiting For Guffman (#21, 1996) but this was a bad year for movies, so it sneaks into the top ten. The Christopher Guest led improv crew makes a movie about the crazy people who compete in dog shows. I'd put this squarely in the middle of the three Guest movies (Guffman and A Mighty Wind are the other two), and my opinion of them is directly proportional to how mean they are to their characters. Guffman is hilarious and great in that it not only mercilessly mocks the losers who make up the play, but it also clearly has a lot of affection for a bunch of weird folks who just want to put on a show. A Mighty Wind has none of that human feeling, it just wants to depict some silly characters for us to laugh at. Best In Show is somewhere in between. A few of the characters are sympathetic (Christopher Guest and the gay couple being the main ones) but the rest are just savaged. It's funny for awhile, say, a sketch, but over the course of a feature length film, it gets tedious. 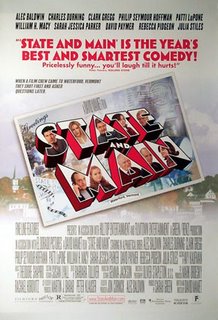 6. State And Main - A showbiz meets small town America comedy written and directed by David Mamet. William H. Macy is the director who's trying to convince Sarah Jessica Parker to do a nude scene, Alec Baldwin's the star who seduces local teenager Julia Stiles, and Philip Seymour Hoffman is the screenwriter who falls for local guru Rebecca Pidgeon. It's a smart, funny, entertaining film, but not a great one. Again, this ain't a great year for movies.

5. Wonder Boys - Michael Douglas plays a pot-smoking writing professor and novelist who's stuck in a rut. Frances MacDormand plays the married chancellor of his college, who's he's having an affair with and is now pregnant. Katie Holmes is the adoring student who rents a room in his house, Robert Downey Jr is his agent, in town for a writing festival and to get him to finally finish the book he's been working on for a very long time, and Tobey Maguire plays his very weird yet promising student. Based on the book by Michael Chabon, which I haven't read, but I've read two of his other books, Summerland and The Adventures Of Kavalier And Clay, which are both very good. The soundtrack is a whole lot of Dylan, and Bob even won an Oscar for the song "Things Have Changed". A weird, dark, fun film. 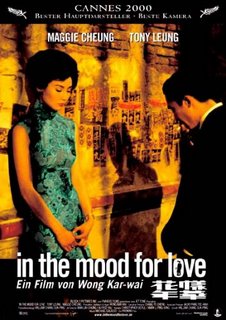 4. In The Mood For Love - Tony Leung and Maggie Cheung star in Wong Kar Wai's film about neighbors in 1962 Hong Kong who discover their spouses are having an affair. Even though the two of them are seemingly perfect for each other, they resolve not to become like their spouses. Like every Wong Kar Wai movie, it's beautiful and slow and thoughtful. But like all of his films other than Chungking Express, it's a bit too cool and humorless. 2046 makes a heck of a lot more sense if you've seen this one first, by the way.

3. O Brother, Where Art Thou? - A letdown coming off of The Big Lebowski, but still a pretty good movie. A loose adaptation of The Odyssey with George Clooney escaping a chain gang and trying to get back to his wife and rid her of her suitors. It's set during the depression and works as a survey of old weird America as well as a Homer adaptation. John Turturro and Tim Blake Nelson are Clooney's fellow escapees. Along their way they meet John Goodman as a cyclops, the KKK, some corrupt politicians, Babyface Nelson, some sirens and Tommy Johnson, waiting for the devil at a crossroads. I hear the soundtrack was pretty popular.

2. Almost Famous - Cameron Crowe's autobiographical film about a teenage rock critic on the road with a mediocre band is flawed but ridiculously watchable. A couple months ago, in fact, I watched it twice in one day, and I haven't done that with any movie for years. The soundtrack is great, as Crowe's soundtracks always are, Kate Hudson, Frances McDormand, Jason Lee and Billy Crudup are all very good. It's got Philip Seymour Hoffman, Zooey Deschanel, Anna Paguin, Jimmy Fallon, Fairuza Balk and Noah Taylor in supporting roles. It's not my favorite of Crowe's films largely because I just don't like Patrick Fugit's performance in the lead role, I just think he's annoying. 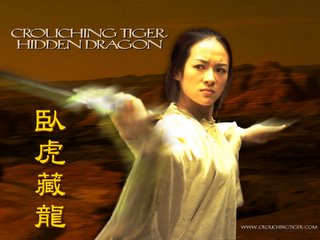 1. Crouching Tiger, Hidden Dragon - The only truly great film of the year still managed to be overrated by American film critics who somehow managed to remain ignorant of the Hong Kong movie scene throughout the 90s. They generally praised the originality of the film, especially in its work with wire stunts (see David Denby's review in the New Yorker: The characters can fly! I've never seen that before!). This act of collective critical ignorance would be roughly analagous to crediting Touch Of Evil for inventing the chiaroscuro lighting for film noir genre films. Anyway, despite the dfumb Americans, this is a great movie. Yuen Wo Ping's action choreography is pretty much perfect: alternately fun and fast and slow and beautiful. The cast is excellent, though I think director Ang Lee fell into the trap that so many directors have in the last decade, that of not allowing Chow Yun-Fat to smile. Michelle Yeoh and epecially Zhang ZiYi are tremendous and Chang Chen, who you might recognize from Wong Kar Wai's Happy Together (#4 1997) or 2046, is pretty good. Speaking of Wong Kar-Wai, it should be noted that another act of critical ignorance was crediting Ang Lee with legitimizing the martial arts film with a serious and artistic presentation. Of course, Wong Kar-Wai did that with Ashes Of Time back in 1994. Still, Crouching Tiger is the better film, and it's better than Zhang Yimou's two great martial arts art films, House Of Flying Daggers and Hero, largely because among those film it has the best balance between image and story, between genre film and art film.


Quite a few Unseen movies this year, a lot of them are probably pretty good too: 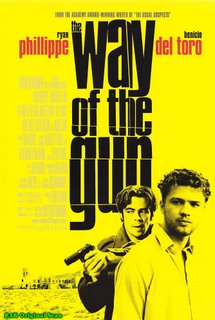