This was a pretty good year for movies. Very tough to decide between the top 3 films this year. The total number of films I've seen went down again, but almost every movie from this year is worth seeing. Really only the last place one is truly awful. 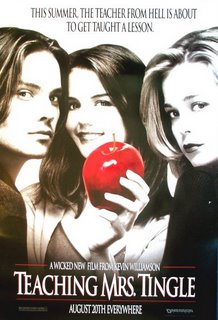 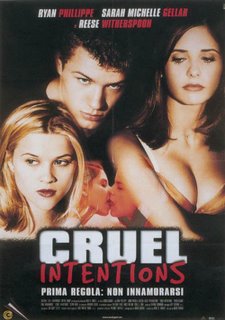 15. Go - Doug Liman's follow-up to Swingers was this often overlooked little exercise in non-linear storytelling. It's three different and, of course, ultimately interconnected stories about some kids who work together at a grocery star. Sarah Polley and Katie Holmes are the very attractive leads, and it also features Scott Wolf, Jay Mohr, William Fichtner, Breckin Meyer and Taye Diggs.

14. Cradle Will Rock - Hoosiers for lefty theatre geeks? Tim Robbins's film is a big mess of an epic about a bunch of famous people who just want to put on a show and the famous people who want to shut them down for the good of capitalism and democracy and apple pie and all that. The enormous cast features: Hank Azaria, Joan and John Cusak, Cary Elwes, Philip Baker Hall, Bill Murray, Vanessa Redgrave, Susan Sarandon, John Turturro, Emily Watson, jack Black, Bob Balaban, Gretchen Mol, Ruben Blades and Paul Giamatti.

13. Existenz - I'm not especially familiar with David Cronenberg, as I've only seen this, The Fly and A History Of Violence, but I liked this one a lot. Jennifer Jason Leigh invents a really realistic virtual reality game that she plays with Jude Law. The game's so good that they can't tell the virtual from the actual reality. A popular theme in 1999 as a couple films higher up on the list explore the same subject. Also stars Ian Holm, Willem Dafoe, Christopher Eccleston and Sarah Polley. 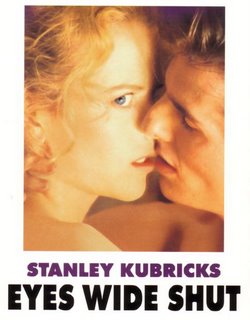 12. Eyes Wide Shut - Stanley Kubrick's last film is a fairly incoherent mess that looks really great and maybe doesn't make that much sense. Tom Cruise is so upset after his wife tells him she once thought about cheating on him that he runs off into the night into one bizarre group of sexual weirdos after another, all told in Kubricks slow-moving, ultra-clinical style. Nicole Kidman's performance is great, Cruise is decent enough. I have no idea what to think about the whole rich-people cult-orgy thing.

11. The Insider - I avoided this Michael Mann film for quite awhile, chalking it up to another generic bit of anti-smoking propaganda. When I finally saw it, I was pleasantly surprised to find it was about journalism and whistle-blowing in general and had very little to do with cigarettes. Russell Crowe stars as the tobacco scientist who, more or less, wants to expose the industry evil despite his non-disclosure agreement and his family's objections. Al Pacino is the 60 Minutes producer who prods him along. Both are excellent. It could have been just another issue movie of the week, but thankfully it's much much better than that.

10. Three Kings - Another movie that thankfully exceeded my expectations. I was sure it'd be a bland war is bad issue movie. Instead, this is an old school action adventure movie, more in the mold of Gunga Din than Courage Under Fire. George Clooeny, Marky Mark, Ice Cube and Spike Jonze set off in a Quest For Saddam's Gold in the last days of the first Gulf War, but end up actually fighting bad guys and becoming heros. Also stars Nora Dunn, Mykelti Williamson, Jamie Kennedy, Alia Shawkat and Judy Greer (the last two are on Arrested Development). Directed by David O. Russell, who did Spanking the Monkey, which was alright, I Heart Huckabees, which I liked and Flirting With Disaster, which I haven't seen but really should. 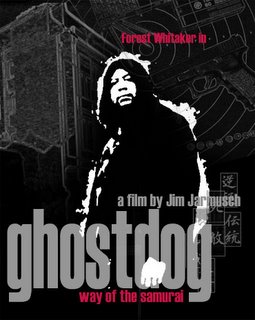 9. Ghost Dog: The Way Of The Samurai - Forrest Whitaker is great as a quiet mob hitman who tries to be a samurai, inspired by the book Rashoman. When one of his hits is witnessed by a girl, the mob decides to kill him. So, he tries to kill all the bad mob guys without hurting the girl or his master, the mob guy who saved his life when he was a kid. In the meantime, he hangs out with his best friend, an ice cream vendor who only speaks French (Ghost Dog only speaks English). Probably Jim Jarmusch's most commercial film, but that isn't saying much.

8. Sweet And Lowdown - I just bought a Best of Django Reinhardt album yesterday, it's pretty great so far. This is the last good Woody Allen movie (though I hear Melinda and Melinda and Match Point from 2005 are pretty good, I haven't seen them yet.) It's a fictional biopic of a jazz guitar player (Sean Penn) who likes to get drunk, shoot rats and hang around with a mute Samantha Morton. As you'd expect in a Woody Allen movie, it's funny, smart has great music and great acting by Penn and Morton.

7. American Pie - By far the best of the late-90s teen comedies. There were a lot of attempts to imitate it's success, including two pretty bad sequels, but none managed to do it. The reason is that what they tried to imitate was the grandma-scaring sex jokes instead of the intelligent screenplay about realistic high school kids. It's almost enough to make you think the good parts of the movie were just an accident. That they were actually just trying to make another Road Trip. Maybe writer Adam Herz was, and that's why he's written nothing but American Pie related films. But director Paul Weitz went on to direct In Good Company, which was pretty good, and About A Boy, which I haven't seen. 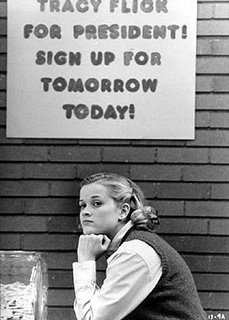 6. Election - Alexander Payne's vicious satire of high school, politics and Middle America. Matthew Broderick plays a schlub of a social studies teacher who tries and fails to cheat on his wife, and rigs the high school student body president election he's in charge of so the obnoxiously perky Reese Witherspoon won't win it. Chris Klein, from American Pie, plays the brain-dead jock he gets to run against Witherspoon. Might be the best movie about high school ever.

5. South Park - The best musical in a very long time. Upset by the language in a movie all their kids are seeing, the parents of a small Colorado town organize and instigate a war with Canada. Meanwhile, Satan and his boyfriend, Saddam Hussein, eagerly await their return to Earth. Our only hope are four grade school kids, one of whom surprisingly dies in the early going (I won't give away which one). best song: the inspirational "What Would Brian Boitano Do?"

4. Office Space - Now recognized as a true classic, this film bombed on it's initial theatrical release. I'm prou to say I saw it on opening night and loved it from the start. Ron Livingston stars as a corporate drone who gets hypnotized into a state of total relaxation and starts blowing off work and gets promoted for it. Along the way, he romances a local waitress, Jennifer Aniston, and plots a robbery like the one in Superman III with his computer programmer buddies Samir and Michael Bolton. Written and directed by Mike Judge, the man responsible for Beavis And Butt-Head and King Of the Hill. Also stars Gary Cole, Diedrich Bader, John C. McGinley and Stephen Root. A favorite line is tough to pick, but I'll go with: "You know the Nazis had pieces of flair, that they made the Jews wear."

3. Magnolia - Paul Thomas Anderson does the Short Cuts thing a heck of a lot better than Robert Altman did. This sprawling film about many many different screwed up people in Los Angeles connected by a game show and a very strange rainstorm. It's about randomness and coincidence and fate and post-modern life and bad fathers and screwed up kids. befitting a massivve film is the massive cast: Tom Cruise (in a very good performance), Julianne Moore, Philip Seymour Hoffman, Phillip Baker Hall, Melora Walters, John C. Reilly, William H. Macy, Patton Oswalt, Alfred Molina, Tom Jane, Jason Robards, Orlando Jones, Felicity Huffman, Luis Guzman, Ricky Jay and Henry Gibson. For some reason, my wife hates this movie. She liked Punch-Drunk Love though. 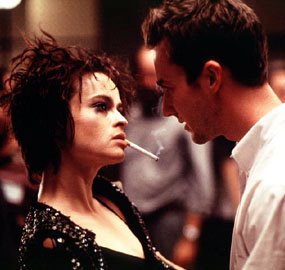 2. Fight Club - It was very tough to decide between these top three as the best of the year. They're all great films. Magnolia I put at #3 because it's a bit too much, too depressing, too long. Fight Club I ranked second because it's a trick movie. A movie where, once you know the secret, however great that secret is, the movie loses something. It just isn't as good the next time you see it. Generally, I'm not a fan of trick movies for this reason. The Usual Suspects, Memento, and The Sixth Sense are all movies I think are overrated for their tricks. The Others, Vanilla Sky and Fight Club I like in spite of their tricks. Still, I've only seen Fight Club two or three times. Unlike those first three, there's enough to love in it: Fincher's direction, Brad Pitt and Edward Norton's off the wall performances, Helena Bonham Carter trying to get as far away from Merchant-Ivory as she can, the sheer silliness of the satire, and the crazy fact that people started actually forming fight clubs in the wake of the movie (ah, to live without irony). And of course, thematically it has a whole lot in common with this year's number one film.

1. The Matrix - What to think of a film where the lead actor's best line is "Whoa," yet manages to also reference Jean Beaudrillard's Simulacra and Simulation as a guide to it's reality twisting convolutions? It's a comic book action hero movie that inverts the trajectory of the heroic epic that has been standard since the Arthurian Romances of a thousand years ago (The hero's world has been laid waste by the evil whatever, the hero must quest to restore the world to it's paradisical beginning. In The Matrix, the hero's world has been made a paradise by the evil whatever, and the hero must quest to restore it to it's initial wasteland. What do you think that says about us?). It's the movie that changed the action movie genre for the next decade, much like Die Hard did at the end of the 80s. Not just in it's use of special effects, which is interesting and very cool, but in introducing Hong Kong choreographer Yuen Wo Ping to the US, where he's gone on to be responsible for just about every interesting action sequence for the last six years. It's a great action movie with fascinating cultural and philosophical relevance. They never should have made sequels though.


Nothing I'm too upset about missing this year, though I've heard great things about Iron Giant and, yes dear, Boys Don't Cry: 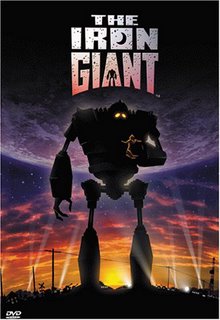 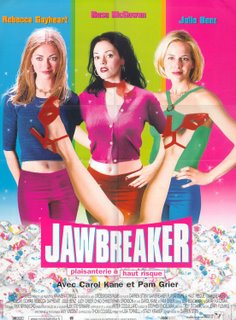