After two of the best years ever, 1995 can't help but be a disappointment. That didn't stop me from seeing more movies than ever: 87 by my count. Some good movies this year, and some of the worst I've ever seen.

87. Dracula: Dead And Loving It 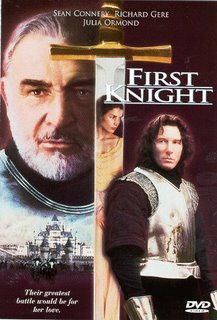 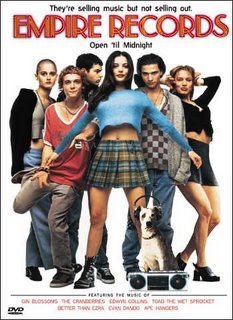 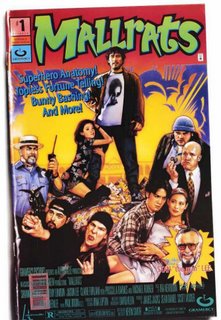 15. Smoke - A weird little movie set around a Brooklyn smokeshop and starring Harvey Keitel, William Hurt, Forest Whitaker, Stockard Channing, Giancarlo Esposito, and Harold Perrineau (the dad from "Lost"). It's a series of short stories about the shop owner, a writer who frequents the shop, and a kid the writer kind of adopts. The writer is author Paul Auster, who also wrote the screenplay. Directed by Wayne Wang, it's companion film, shot on the set during downtime while filming the movie, is very funny, has a cast of dozens (including some great scenes with Jim Jarmusch and Lou Reed) and ranks #44 this year.

14. Ghost In The Shell - This very influential anime was directed by Mamoru Oshii and is one of the first really good movies to deal with the impact of computers on reality, several years before The Matrix. The plot is about a cyborg detective and her partner on the trail of a super-hacker, but really it's about information, simulation and consciousness. It isn't the first anime to deal simultaneously with contemporary philosophy and stylish violence, but it's one of the best. 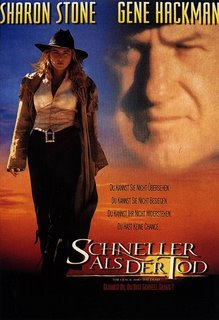 13. The Quick And The Dead - Sam Raimi (Evil Dead, Spider-man) directed this Western starring Gene Hackman, Sharon Stone, Leonardo DiCaprio, Russell Crowe, Stone plays a gunslinger who enters a quick draw contest in the hope of killing Hackman, the guy who killed her father. Just over the top enough.

12. The Usual Suspects - Possibly the most overrated movie of the 90s. Yeah, its fine the first time you see it, twist ending and all. But as a general rule, I'm not a big fan of trick movies. Especially trick movies wherein the entire narrative is invalidated by the trick. It's got a great cast, though: Kevin Spacey, Gabriel Byrne, Chazz Palminteri, Stephen Baldwin, Pete Postlethwaite, Benicio Del Toro, Giancarlo Esposito, Kevin Pollack, and Dan Hedeya.

11. Mighty Aphrodite - Probably the sweetest Woody Allen movie since Zelig. It's a very pleasant romantic comedy in which Woody discovers that the mother of his adopted son is a prostitute played by Mira Sorvino. He tries some Henry Higgonsisms on Sorvino, tries to fix her up with a very dumb boxer who wants to be a farmer, played by Michael Rappaport. Meanwhile, he realizes Peter Weller, the guy who played RoboCop, is obsessed with his wife, Helena Bonham Carter. And all the action is narrated by an actual Greek Chorus featuring F. Murray Abraham, Olympia Dukakis, David Ogden Stiers and Jack Warden.

10. Get Shorty - Stylish comedy with John Travolta as a gangster trying to break into the movie business. Also stars Gene Hackman, Rene Russo, Dennis Farina, Delroy Lindo, David Paymer, Danny DeVito and James Gandolfini. Directed by Barry Sonnenfeld, who used to be the Coen brothers cinematographer (on Miller's Crossing, raising Arizona and Blood Simple), then went on to direct The Addams Family and Men In Black movies. 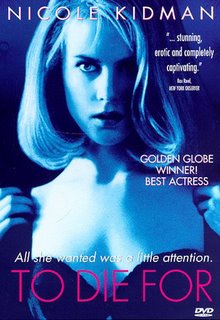 9. To Die For - Nicole Kidman plays a vacuous TV reporter who wants to be famous. So she gets Joaquin Phoenix to kill her husband, Matt Dillon, for her. Also stars Illenna Douglas, Casey Affleck, Wayne Knight, Dan Hedeya and Kurtwood Smith. Directed by Gus Van Sant from a screenplay by Buck Henry, who wrote The Graduate. It's Kidman's first really great performance, and worth seeing for that alone, even if you're one of those lunatics who hates Nicole Kidman.

8. Sense And Sensibility - At the time, this was the movie I thought should win Best Picture. But the fact that I haven't bothered, or wanted, to see it again at all in the last ten years tells me I was probably overrating it. It's very good, great direction by Ang Lee, great acting from Emma Thompson and Kate Winslett. A not especially annoying performance from Hugh Grant. It also stars Alan Rickman, Hugh Laurie and Tom Wilkenson, fine actors all. Its just a Jane Austen movie though, for all the good and bad that entails.

7. Clueless - The best Jane Austen adaptation ever is Amy Heckerling's adaptation of Emma starring Alicia Silverstone, Paul Rudd, Brittany Murphy, Breckin Meyer, Wallace Shawn and Dan Hedeya. That makes three Dan Hedeya movies this year, quite a year for Nick Tortelli. Modernizations of classics are an interesting and as far as I know, unstudied, subgenre. Seems to me that they often do a much better job of capturing the spirt and energy of the source material than more traditional adaptations do, as a comparison of the two 90s adaptations of Emma (the other being the Gwynneth Paltrow version), I think, shows.

6. Braveheart - It's a bit of a guilty pleasure of mine. It really isn't that great a movie, but I love watching it nonetheless. There's some really great action scenes, some genuinely funny moments, great supporting acting by Brendan Gleeson, Brian Cox, Patrick McGoohan, Catherine McCormack and Sophie Marceau. Mel Gibson's alright in his superhero, as opposed to ultra-conservative sadistic nutjob, role. A fine example of the historical epic genre, as long as you don't take it too seriously, like, say, Mel Gibson or the Academy might. Freedom!

5. Party Girl - Parker Posey stars as the eponymous libertine who becomes a librarian and an existentialist to win the heart of a Lebanese street vender. Saw it on a whim one afternoon, if I remember correctly there was one other person in the theatre with my roommate and I. Despite being overlooked by the world at large, this is a truly great film. Weird, funny, romantic, and even a little deep.

4. Kicking And Screaming - A great year for overlooked comedies as I've got two back to back in the top 5. Noah Baumbach's debut film is about what happens to a group of friends after they graduate from college. Grover (Josh Hamilton) drinks a lot and pines after his ex-girlfriend Jane (Olivia D'Abo) who went to Prague. Max (Chris Eigeman) does crosswords and sleeps with his friend's girlfriend (Parker Posey). Skippy (Jason Wiles, the guy who got Kelly hooked on coke on 90210) decides to keep taking classes for the heck of it. Otis (Carlos Jacott) decides to skip grad school and get a job in a video store run by Chet (Eric Stoltz) doesn't really count because he never graduated and has been working on his thesis for the last half decade or so. Brilliantly funny and accurate examination of what it's like to be an aimless twenty-something in the 90s. Its a crime that it never found an audience (it isn't even on DVD yet) and that Baumbach's only been able to make three movies over the last decade.

3. 12 Monkeys - Terry Gilliam's best movie is a remake of the short film "La Jette", which I've never gotten around to seeing. Bruce Willis stars as a prisoner in a post-apocalyptic future who's sent back in time to try to prevent the epidemic breakout that ended up causing the apocalypse. When he gets back to the past, he's locked up in an insane asylum with Brad Pitt, and manages to escape and enlist the help of his psychiatrist, Madeline Stowe. Like most of Gilliam's movies, it's very visually striking, this time very dark and noirish with bright bursts of color. All the actors are great, and Pitt even got an Oscar nomination for his manic overthetop crazy guy. It's the kind of trick movie that The Usual Suspects is, in that once you know how it ends, there's still reason to go back and watch it. There's craft to how its made and how all it's pieces fit together, not just a twist for the sake of a twist.

2. Heat - It's a tough call for the number one spot this year, I imagine a reasonable argument can be made for Heat being the best. It is a great film, well directed by Michael Mann and with an outstanding cast: Al Pacino, Robert DeNiro, Val Kilmer, Natalie Portman, Jon Voight, Wes Studi, Ashley Judd, Amy Brenneman, Ted Levine, Mykelti Williamson, Dennis Haysbert, William Fichtner, Hank Azaria, Henry Rollins, Tone Loc, Danny Trejo and Jeremy Piven. What keeps it for being a true classic, I think, is that despite the three tremendous action sequences, the in-between scenes seem a little to slow. Like the characters are being given more importance than they deserve. A little overblown. But those three sequences really are amazing. And there's a scene with Pacino and DeNiro. 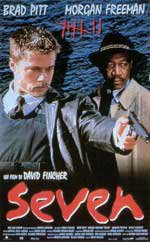 1. Seven - I'm generally not a fan of dark or depressing movies, but I've always loved Seven. I think the reason is that it doesn't ever seem to be that it's trying to depress me for the sake of depressing me. It's got a severe, brutal logic to it and it follows that logic from beginning to end. Morgan Freeman plays a methodical cop nearing retirement, Brad Pitt plays his new partner and the two of them try to hunt down a serial killer who's reenacting the seven deadly sins. Gwynneth Paltrow had her first big role as Pitt's wife. It's David Fincher's debut film, before this he was a music video director (most notably Madonna's Vogue and Express Yourself). As you expect from music video guys, it's a highly stylized film, literally one of the darkest films ever (at least in 1995), it doesn't get much noirer. I give it the edge on Heat because it's a much tighter, more compact and efficient film, only partly because it isn't as ambitious.


Not a lot of good Unseen movies this year, but plenty of bad ones: 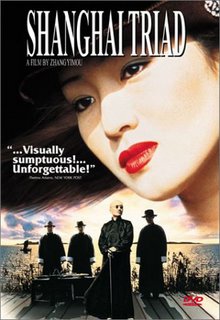 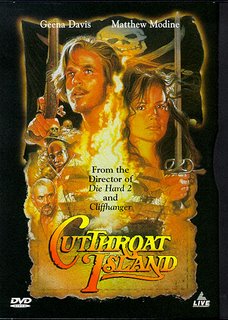 Hackers
The Net
While You Were Sleeping
Jumanji
Houseguest
JLG/JLG
Boys On The Side
Jefferson In Paris
Jury Duty
The Fan
Beyond Rangoon
Nico Icon
Angus
Gordy
Persuasion
The Scarlet Letter
Jade
Kiss Of Death
Carrington
The Crossing Guard
Judge Dredd
Wild Bill
Posted by Sean Gilman at 9:18 PM