If any year is going to challenge 1993 as the best year for film in my lifetime, it'd probably be 1994. The top 50 or so movies this year are very good, with the top 65 or so actually worth watching. 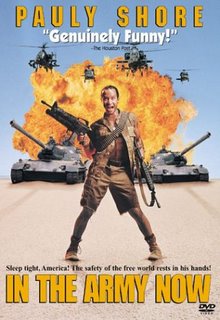 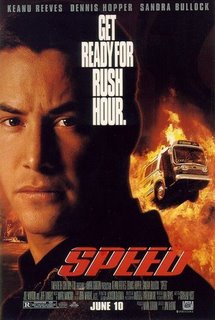 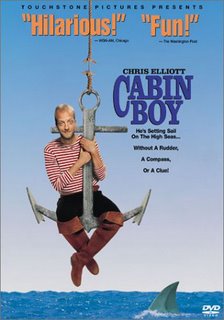 15. Three Colors: White - The second part of Krzysztof Kieslowski's trilogy is a comedy starring Julie Delpy and Polish comic actor Zbigniew Zamachowski. They get divorced in Paris, leaving Zamachowski penniless. He meets a strange guy in a subway station who offers to smuggle him back to Poland in his luggage. Back home, he resumes his hairdressing career and plots his revenge against Delpy. As light and funny as Blue is depressing, it's the slightest of the three movies.

14. Ashes Of Time - Before Crouching Tiger, The House Of Flying Daggers, or Hero, there was Wong Kar-wai's Ashes Of Time. The influence on those later films is obvious, as Wong and his longtime cinematographer Christopher Doyle apply the techniques of Chinese art movies to a kung fu epic. It's slow, beautiful, complex in structure and in meaning. Stars Brigitte Lin, Tony Leung, Maggie Cheung, Jacky Cheung, Leslie Cheung and the other Tony Leung. With action choreographed by Sammo Hung.

13. Ed Wood - Tim Burton's most serious film is a bio-pic about the worst director of all-time. Johnny Depp is out standing as Wood, and Martin Landau is great as his buddy, the aged actor/junkie Bela Lugosi. It's a disturbing film, because Wood seems to have no idea just how awful he really is. His unbound enthusiasm and belief in his own abilities is either inspiring or horribly depressing. Also stars Patricia Arquette, Sarah Jessica Parker, Bill Murray, Max Casella, Jeffrey Jones and Vincent D'Onofrio as Orson Welles.

12. Drunken Master II - Jackie Chan stars in the sequel to his classic Wong Fei-hung parody that helped invent the modern martial arts comedy genre. Generally considered the best of the 90s kung fu movies, though I prefer a Jet Li's The Legend of Fong Sai-yuk. The main edge Chan has on Li, of course, is that he refuses to use wires or special effects in any of his stunts. Still, I prefer Li as the Buster Keaton to Jackie Chan's Charlie Chaplin. 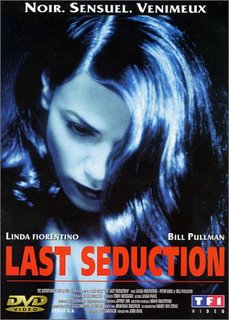 11. The Last Seduction - Linda Fiorentino stars as a very femme and very fatale femme fatale in John Dahl's top notch neo-noir. After making a bunch of money in a drug deal, she leaves her husband (Bill Pullman) and steals all the money. As Pullman tries to hunt her down, she enlists clueless Hick Peter Berg to help her out. Fiorentino's terrific as one of the most evil women of all time.

10. Hoop Dreams - In this remarkable documentary, the filmmakers followed two inner-city Chicago basketball players throughout their high school careers. William Gates got into an exclusive prep school but suffered from knee injuries and never really fulfilled his playing potential, and had a kid along the way. Arthur Agee has to play at a public school, but had a much better career. Neither one went on to do much in college, though Agee was the more successful of the two. Its a great film about poverty and sports ad the relation between the two.

9. Once Were Warriors - One of the more intense and depressing films that I actually like, this is about a family of poor Maori in New Zealand. The wife is descended from Maori warriors, the husband from the slave class. It's about the corruption of the nobility of the warrior class by modernity through her relationship with the drunken, wife-beating, deadbeat slave-class husband. Anti-egalitarian for sure, but still very cool.

8. Reality Bites - I have no real defense for ranking this movie so high. Other than that I graduated high school in 1994. It's a silly Gen X romantic comedy/coming of age movie, albeit one with a great cast. Winona Ryder, Ethan Hawke, Ben Stiller, Janeane Garofolo, and Steve Zahn, with bit parts by John Mahoney, Renee Zellweger, Andy Dick, and David Spade. It's not as good as Singles, it's most similar film. Nostalgia's a tricky thing. There is an interesting idea in that it basically became the kind of victim of commercialism and vapidity that it criticizes itself.

7. Four Weddings And A Funeral - But for Andie McDowell, this would be a truly great movie. I've a theory that British writers are incapable of writing credible dialogue for Americans. Exhibit A in this theory is William Holden's part in The Bridge On The River Kwai. Exhibit B is this movie. She looks great and all, but every time she says something, you want to cringe. It's possible (probable?) that she's just a bad actor, but I really can't imagine anyone making these lines sound good. The rest of the movie's great, especially since Hugh Grant hadn't quite reached Totally Annoying yet. Kristen Scott Thomas, Simon Callow and John Hannah steal the film from the mediocre leads. 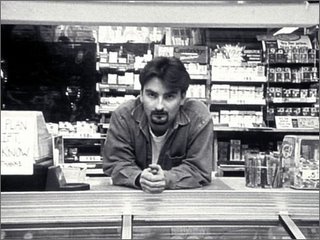 6. Clerks - Rightly beloved by anyone who's ever worked a customer service job, Clerks features truly terrible actors saying truly hilarious lines. Kevin Smith spent more on it than Robert Rodriguez did for El Mariachi, but you can't tell by watching it. It's more a collection of shorts than one cohesive film. But that doesn't really matter. My favorites: the egg guy, the Star Wars discussion (of course), any scene in the video store, and the cat.

5. The Shawshank Redemption - The It's A Wonderful Life of the 90s? Perhaps no movie has been played more often on television over the last decade (where would we be without TBS?). For a prison movie chock full of murder, rape and suicide, it's surprisingly watchable. Morgan Freeman and Tim Robbins are, of course, terrific. The director, Frank Darabont, appears to be the official writer-director for all Stephen King prison movies. He's directed only three movies, two of which are Shawshank and The Green Mile. 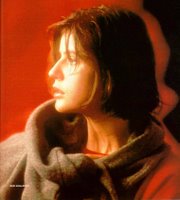 4. Three Colors: Red - The last part of the trilogy stars Irene Jacob as a model who accidentally runs over a dog owned by Jean-Louis Trintignant, a retired judge who spends all his time eavesdropping on his neighbors' phone conversations. Being about fraternity, this film is all about interconnectedness (the opening shot, of a phone call traveling through wires across the english channel, is a both famous and brilliant. In addition to the technological connections, there's a little side story about a law student studying for his final exams that ultimately fits in perfectly strangely. And of course, this is the film where the characters from all three of the movies come together, mediated by technology and weather. A great conclusion to what might be the best trilogy in film history.

3. Quiz Show - Robert Redford's great film about the scandal around 21, the 1950s game show that gave the answers to its contestants. The cast is amazing, led by Rob Morrow from Northern Exposure playing Richard Goodwin, the Congressional investigator who went on to be a speechwriter for John F. Kennedy, John Turturro, Ralph Fiennes, Paul Scofield, Mira Sorvino, David Paymer, Hank Azaria, Griffin Dunne, Barry Levinson and Martin Scorsese. The attention to period detail is perfect and the film has a look and color that I've never quite seen before. The relationship between the Van Dorens, Fiennes and Scofield, is my favorite, it's what really makes the film great, more than just a movie about a scandal. Also, Paul Scofield has one of my all-time favorite voices. 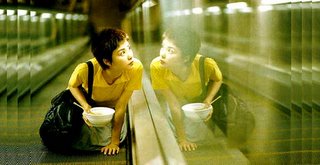 2. Chungking Express - This was actually a very tough call for me, whether to make this or Pulp Fiction the # film of the year. As great as Tarantino's movie is, I really love Chungking Express. Ultimately I decided Pulp Fiction had to be #1, because without it, I might never have seen a Wong Kar-wai movie. It's two separate love stories, one dark and gangsterish, the other light and fun. Brigitte Lin and Takeshi Kaneshiro star in the first, about a cop who, while obsessing about the girl who left him, spends a platonic night with a drug dealer on the run from her bosses. The second stars Tony Leung as a cop who's obsessed with his flight attendant ex-girlfriend and Faye Wong as the crazy/cute girl who repeatedly breaks into his apartment trying to brighten it up. My pick as the most romantic film ever. 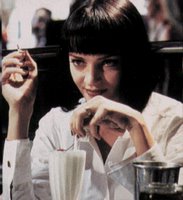 1. Pulp Fiction - If you haven't seen Pulp Fiction, you really shouldn't be reading this blog. I mean it, go away. Come back after you've watched it. On of the most direct influences on my becoming a film geek (not unusual for geeks of my generation), it made me want to go out and watch everything that influenced Tarantino. In the Goddard-free Spokane of the mid-90s, that meant film noir and Scorsese. Welles, Hitchcock and Kurosawa weren't far behind. Influential as it is, it is first and foremost simply a great movie. As everyone who tried to copy it found out, there's more to Tarantino than trendy pop culture references and a jumbled timeline. The references are only useful in that they reveal character, but what makes Tarantino's characters special is the way he works with the actors. I can't think of a single bad performance in any Tarantino film, and that is remarkable. John Travolta is not a good actor, why is he great in Pulp Fiction? Beyond the screenplay, the direction is great as well. the music is outstanding, perfectly integrated. And the cast is terrific, I'm sure I don't need to recite them here. A serious contender for best film of the 90s.


Quite a few Unseen Movies this year, and most of them are going to stay that way:

The Secret Of Roan Inish
The Kingdom 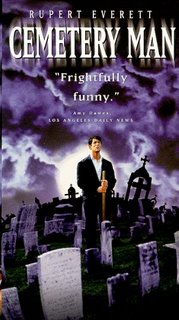 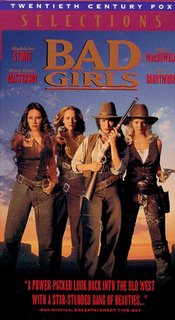