Running Out of Karma: The Big Heat 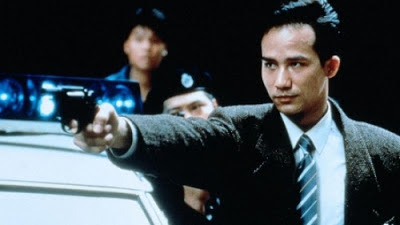 Running Out of Karma is my on-going series on Johnnie To, Hong Kong and Chinese-language cinema. Here is an index. An earlier version of this review appeared here almost two years ago.

So here we come to the first film in the genre that Johnnie To would become best known for: the urban crime thriller. Released a mere seven months after his first big hit, The Eighth Happiness, The Big Heat finds To working with Tsui Hark for the first and only time. In 1986, Tsui (he claims) had convinced the comedians that ran Cinema City to make A Better Tomorrow, even though it wasn't a comedy ("Why would anyone want to see a depressing movie?" they protested according to Tsui in Lisa Morton's The Cinema of Tsui Hark). That film's runaway success launched a whole genre's worth of imitators, radically transforming the Hong Kong movie scene, the effects of which are still felt today. Films like Ringo Lam's City on Fire and Prison on Fire, Parkman Wong's Final Justice, Wong Jing and Corey Yuen's Casino Raiders (which To would direct the sequel to in a few years), Taylor Wong's Rich and Famous, Yuen Wo-ping's Tiger Cage, Patrick Tam's My Heart is that Eternal Rose, Wong Kar-wai's As Tears Go By, Corey Yuen's She Shoots Straight, Lau Kar-leung's Tiger on the Beat films (and on a parallel track, kung fu films descending from Jackie Chan's Police Story, the Yes, Madam and In the Line of Duty movies featuring Michelle Yeoh, Cynthia Rothrock and Donnie Yen, along with Yuen Biao's Righting Wrongs, most of which were directed by Corey Yuen or Yuen Woo-ping), and more all quickly followed before the end of the decade. Into this genre stepped Johnnie To, maker of wuxia television and slapstick romantic farces. 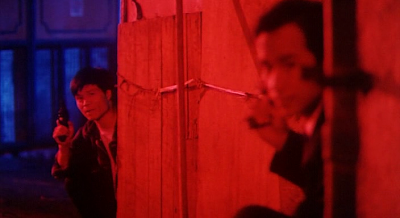 The film was apparently a very troubled production, going through a number of directors (see this interview with its screenwriter, Gordon Chan, who would go on to write and direct one of Jet Li's greatest films, Fist of Legend, in 1994), and Tsui, working with Cinema City and his own production house Film Workshop, was in the midst of a half-decade of problematic working relationships with directors like John Woo (on the two A Better Tomorrow sequels) and King Hu (on Swordsman), relationships that seem to presage To's own difficulties in the late 90s in trying to produce other director's films in the early days of Milkyway Image. The Big Heat went through a variety of directors, and while To is the primary name, the mishmash nature of the film makes it hard to credit any one thing to a particular authorial voice. It's a cops vs. gangsters story, with Waise Lee as the about-to-retire veteran who learns his ex-partner (injured in the line of duty, a bad leg ala Mark in A Better Tomorrow) has been brutally murdered in Malaysia. He takes the case and assembles a team which includes a callow rookie, a Malaysian cop who always wears sunglasses and his regular partner, Philip Kwok, one of the Five Deadly Venoms, to take down the criminals. The plot moves briskly, with a minimum of melodrama or characterization (Joey Wang is sadly underused as the rookie's love interest), rarely taking the time to explain something in words that can be inferred from images, like the fact that Lee suffers from nerve damage in his left hand, which is why he wants to retire. Whether a byproduct of a chaotic writing and editing process, or an intentional storytelling choice, the result is a brisk and exciting cop movie, a step above the Taylor Wongs of the period.

There are other echoes of later To films, the most obvious example being a shootout between two groups of cops, one side suffused in fire engine-red light, with the other in deep blue (much like the blue in the opening of To's 1999 film Where a Good Man Goes), a ne plus ultra of late-80s Hong Kong neon. In its visual stylization and willingness to pause the action for several beats as the gunmen plan their actions, it presages many of To's later gun battles. The violence in the film is nauseatingly realistic, from the opening images of a hand punctured by a drill: bodies are beheaded, set aflame, run over by cars again and again, limbs shattered by bullets. It's more graphic than anything To would later depict (though the early Milkyway films certainly don't shy away from violence), more like the grotesque horror-comedy of something like Tsui's We're Going to Eat You or Ringo Lam's 1992 Full Contact than the restrained cool of Drug War or the Election films. Most To-like though is a magical bit of release near the middle of the film as the cops, rejecting a bribe from the film's villain, throw piles of cash into the air, watching it blow in the breeze, that recalls moments of childlike freedom snatched from bleaker realities in Throw Down (as when the plot is temporarily suspended so the three main characters can collaborate to free a red balloon from a tree) or Sparrow or the Running Out of Time films, which take what are ostensibly dark and violent gangster movie settings and turn them into spaces for play and possibility. 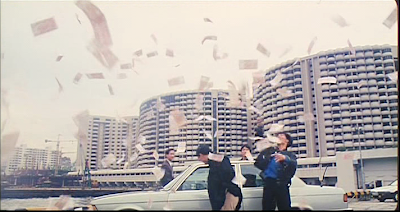 Waise Lee, the heel from A Better Tomorrow and Bullet in the Head, is excellent playing against type as the hero (as is Chu Kong, Chow Yun-fat's friend in The Killer) playing equally against type as the bad guy. Lee is yet another To hero with a disability, see also: Throw Down, Mad Detective, Running on Karma, Running Out of Time, Vengeance, Yesterday Once More, Love on a Diet, Wu Yen, Blind Detective and, if being dead counts as a handicap, A Hero Never Dies and My Left Eye Sees Ghosts. But where most of those other films use the disability as a launching point for the character's transcendence of physical limitations, either spiritually or through an existential stand in the name of honor, loyalty, friendship, and/or love, The Big Heat remains thoroughly materialist, grounded in the world of Hong Kong's cops and gangsters before the fall. The sense of vague dread, of millennial fatalism that hangs over much of To's later work is present here, but it's given a more explicit and specific, and (therefore) rather less interesting, name: the gangsters openly discuss their plans to cash in while they can before the '97 handover of Hong Kong to China. The end is a plot motivation, rather than a mood. The result of these compromises is a very solid action movie that at times seems like it's going to burst free of its genre, but is missing that last little twist that would become the hallmark of To's Milkway Image films beginning a decade later. 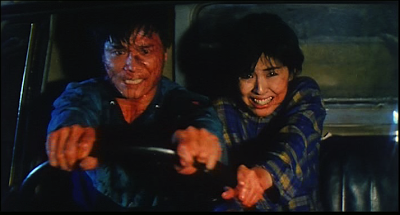 The stand-out performance might be that of Philip Kwok. Kwok has done just about everything you can do in movies: direct, star, write (he was one of the writers on Once Upon a Time in China and America, the sixth(!) in the series started by Jet Li (who took the fourth and fifth films off) and Tsui Hark and the one which was ripped off by Jackie Chan for the big international hit Shanghai Noon (aka, the kung fu movie that my mom likes), although I've heard that Tsui and Sammo Hung may have ripped the idea off from Chan before he was able to make his version of the story), choreograph, produce, he even has an art direction credit (for Wilson Yip's 2004 film Leaving Me, Loving You, starring Leon Lai and Faye Wong). He was of course the Lizard in Chang Cheh's Five Deadly Venoms, but is probably most recognizable as Mad Dog, the bad guy with the eye patch in John Woo's Hard-Boiled. 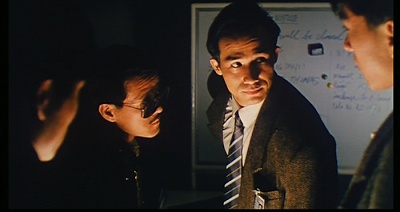