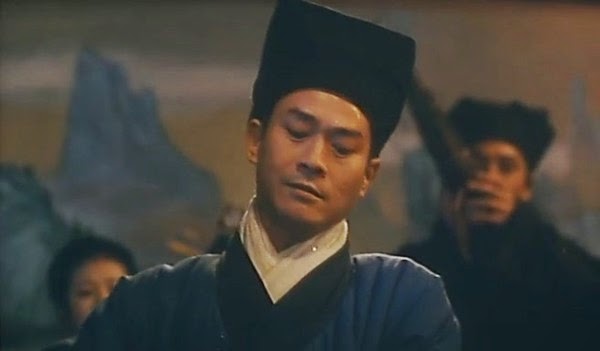 King Hu's final film, it is, like his greatest work (A Touch of Zen) and his first film as an assistant director (The Enchanting Shadow), an adaptation of a story from the 18th Century collection of folk and supernatural tales Strange Stories from a  Chinese Studio by Pu Songling. Hu's previous film had been a failed collaboration with Tsui Hark and Ching Siu-tung on the first Swordsman film, and I wonder if there wasn't a bit of "I'll show you" at work in Hu's decision to make a film so closely related to Tsui and Ching's A Chinese Ghost Story, going so far as to include that film's female star, Joey Wong, in his cast.

Like Zen and Come Drink with Me, Painted Skin features a shifting protagonist. We begin with Adam Cheng's bourgeois nobody. He meets the ghost of Joey Wang and learns she's being trapped in-between the afterlife and reincarnation by a demon called "The King of Yin/Yang" and seeks out two Taoist priests to help her out. Then Cheng disappears from the narrative and we follow the priests (played by veteran supporting performers Wu Ma and Shun Lau) for awhile as they seek out an even better priest to fight the demon. Then we follow the super-priest (Sammo Hung) through the final third of the story. 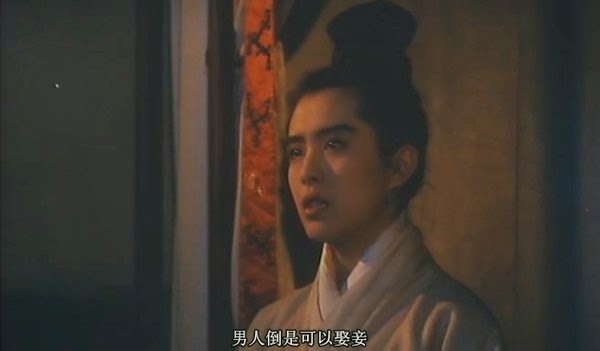 In Zen, the similar progression from everyman to super-priest is tied up with  every other element of the film, as the heroes become less worldly and more divine, Hu's filmmaking becomes more abstract, more purely visual, more inexplicable. Painted Skin though remains grounded in the same kind of swathed in pale blue light early 90s wuxia world from beginning to end. The villains, whether through poor subtitling or lack of budget or both, always seem slightly comical and ridiculous, even when they're committing horrible acts (a far cry from the baby-killing demons in Ching Siu-tung and Johnnie To's The Heroic Trio, which also was released in 1993 and involves the netherworld creeping into the everyday and a journey into darkness to defeat it). Hu doesn't cut his wire-work stunts at the dizzying pace Ching does, but neither does he find time or space for more realistic fighting. The result is just a slower version of silly fights. If Hu didn't have such a brilliant eye for composition, light and space, the film would be intolerable. 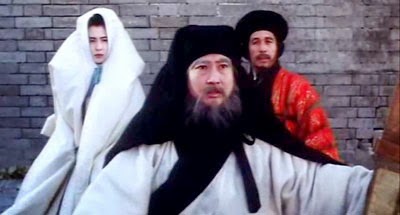 It's fitting that Hu's final film would star Sammo Hung. The two had a long and fruitful collaboration, with Hung reportedly serving as an assistant action director on Come Drink with Me, though he was only 14 years old. He had small supporting roles in Dragon Gate Inn, A Touch of Zen and The Valiant Ones, and served as action director on the latter two as well as The Fate of Lee Khan. He looks old here, made up with a gray beard and wizard robes, aside from his introductory scenes, he doesn't really get time or space to develop his Taoist Gandalf character, nor does he have much opportunity to show off his fighting skills, given the supernatural nature of the action (Lam Ching-ying gets such a chance in a too-small cameo role as "The Purple Taoist").

Sammo appears to have peaked with 1989's Pedicab Driver. His 1990s directorial efforts are of low reputation (the only one I've seen is his final film, Once Upon a Time in China in America, the idea for which he either stole from Jackie Chan (Shanghai Noon) or vice versa) and he hasn't directed anything at all since 1997. That year he left Hong Kong for the US (oh how I long for a DVD set of his cop show with Arsenio Hall, Martial Law) and since his return to Hong Kong, has worked exclusively as choreographer, producer and supporting actor. All lot of small roles like his performance in Painted Skin, tantalizing with memories of past greatness but almost never reaching the heights of his previous work. 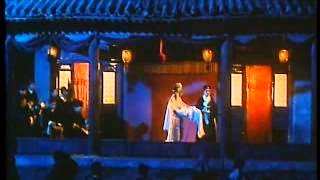