In the prologue to this 1981 film, Lau Kar-leung himself comes on stage to tell us about some of the unwritten rules of lion-dancing, the ways one dancer can offend another and thus incite a brawl (blinking your eyes, lifting a leg, sniffing the other lion's butt). The next scene then involves just such a lion dance, where one club intentionally provokes another, nearly leading to an all-out brawl. Explanation followed by narrative demonstration.

The bulk of the movie though (in fact we never really return to lion-dancing) follows Gordon Liu as the young Wong fei-hung (reprising his role from Lau's earlier Challenge of the Masters, though this doesn't appear to be considered a direct sequel) as he and his buddy (Hsiao Hou) from a rival club engage in friendly competition and raise the ire of another, more evil school. At stake is the respect of a visiting Northern kung fu master (played by Wang Lung-wei, who played one of the primary villains in Chang Cheh's Shaolin cycle), invited by the evil school to help give them an edge in prestige versus their Southern rivals, led by Wong's father's school. The plot then revolves around the intricacies of the social codes that the clubs have established for themselves, the esoteric ways in which they can be violated, and the clever means the up-standing heroes have of resolving the conflicts with minimal bloodshed.

Similarly, Lau explores the intricacies of Wong's Hung Gar fighting style, notably in the film's final fight, set in a narrow alleyway. Lau and Liu demonstrate how the different modes of the technique are designed for confined spaces (6 feet, 4 feet, and less), spaces endemic to the overcrowded cities of the South (Guangzhou and Hong Kong in particular) neatly conveying not merely the spectacle of actors doing cool stuff on screen, but the ideology behind why the actor is moving the way he is. No major director is better able to utilize the kung fu film as pedagogic tool than Lau Kar-leung, or more insistent about doing so. 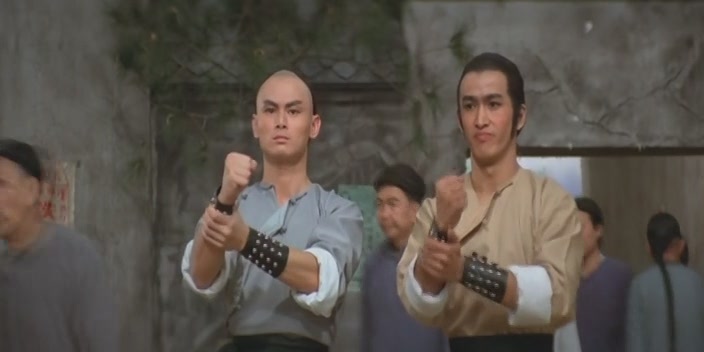 Thus we get not merely and explication of the ideology governing the martial clubs, but an explanation of the ideology governing the specific martial art practiced by Wong Fei-hung (a real person, remember: his disciple Lam Sai-wing was the teacher of Lau Cham, who was the father and adopted father of Lau Kar-leung and Gordon Liu, respectively). Like Challenge of the Masters, it presents the heroic ideal version of Wong (far from Yuen Wo-ping and Jackie Chan's irreverent Drunken Master), a young version of the Confucian patriarch played by Kwan Tak-hing in dozens of films from the 1940s through the 1960s. As such it is a conservative film, or at least a classicist one, attempting to preserve and record an ideology that was quickly on the way out. Codes in Hong Kong films are usually there to be subverted: their contradictions teased out in melodramas that inevitably lead to tragedy and death, heroic bloodshed. Here Lau gives us an alternative to the Chang Cheh/John Woo/Johnnie To tradition, one where it is possible to navigate the competing interests and loyalties and drives of the martial world without anyone having to die, heroically or otherwise. But it takes a Wong Fei-hung to do it.