Running Out of Karma: Chang Cheh's The Duel 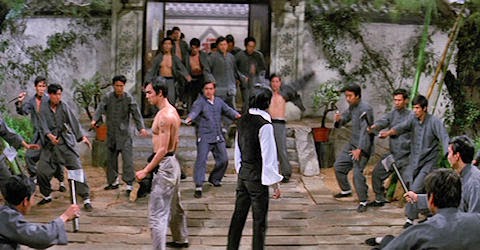 Every time someone talks about David Chiang in The Duel (aka The Duel of the Iron Fist), they use (at least the subtitles do), his full name: Jiang Nan, "The Rambler". The film's other star, Ti Lung (paired with Chiang again and again through the early 1970s) finds himself caught up in an overly complicated series of triad betrayals. Honestly I had no idea what the particulars of the plot were, the exposition in the first few scenes flew by so quickly I simply contented myself with knowing that there were bad guys and Ti was going to kill a lot of them. He does.

Halfway through the film he learns he's been betrayed and returns home to kill a bunch more people. But first he finds his girlfriend, the woman who inspired him to get a giant butterfly tattooed across his chest. She's spent the intervening years forced into prostitution (the villains apparently run some kind of scheme where they force-sell factory-working women into sexual slavery). At first, Ti is outraged by her sluttiness and slaps her. Then he quickly comes to his senses. The two embrace and as she tells him of all the horrible things that happened to her, he calmly tells her how much he loves her and calls her his wife. This generosity of spirit proves too much for her to take and at the first opportunity she kills herself. Tough world.

The duel of the title isn't between Ti and the army of betrayers he must kill (and, spoiler alert: he kills them), but rather between him and Chiang, as Jiang Nan, "The Rambler". Always preceded by a tubercular cough, Jiang Nan, "The Rambler" is every bit the accomplished killer Ti Lung's character is. Tricked by the villains into murdering Ti's godfather, the two find themselves on the same side for awhile, but their shared Code demands that Ti eventually seek revenge. The cough gives away the secret: underneath all the kung fu trappings this is actually a version of The Gunfight at the OK Corral, with the added twist that after the famous showdown, Wyatt Earp and Doc Holliday must face off against each other.

Released in 1971, the film was made in the midst of a remarkably productive stretch for star Shaw Brothers director Chang Cheh. Following 1968's Golden Swallow, he directed six films in 1969, four in 1970, six in 1971, eight in 1972, six in 1973, eight in 1974, five in 1975 and five in 1976. That's 48 films in eight years. Such a ridiculous pace would only be sustainable under the factory-like studio conditions of Shaws at the time, and as is usually the case, quality suffers during such a prodigious output. Mistakes will be made. In this case, it comes down to the screenplay, needlessly convoluted while at the same time wholly unoriginal. Particularly egregious is the desperate way in which the writer(s) contrive(s) reasons for the head gangster to let Ti go after they've captured and tortured him. 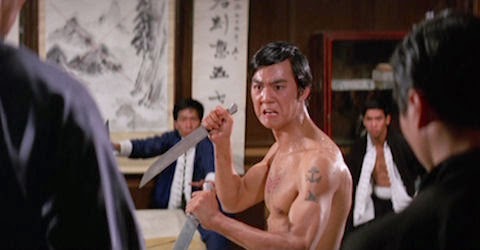 Similarly a symptom of mass production is the soundtrack, like many Hong Kong films of the period cobbled together from the scores of other films, either directly or in slightly altered form (Ennio Morricone usually being the favored source). Perhaps the most memorable thing about this for 21st Century viewers will be the film's several uses of Richard Strauss's "Thus Spake Zarathustra" fanfare, made famous by 2001: A Space Odyssey. It's tempting to treat this as some kind of intertextual reference, as though Chang wants us to draw some parallel between his proto-heroic bloodshed saga and The Dawn of Man, but that would almost certainly be ahistorical. The much more likely explanation is that someone in the Shaw music department thought the theme sounded badass and so stuck it into the film as a character motif. 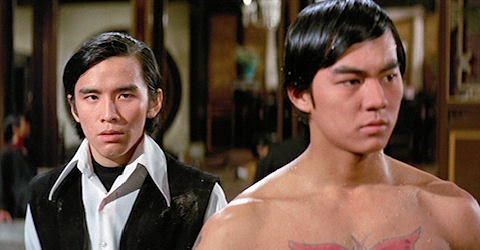 This poses an interesting dilemma for critics. The musical choice was almost certainly not intended to "mean" something in the sense movie homages and references are used to create meaning in post-modern cinema. Yet when watching the film, we can't help but interpret the musical cue as an invitation to draw a connection between the two works (or between the Strauss original or even the Nietzsche work the Strauss is inspired by). Such a train of thought might lead us to see the bloody triad struggle in terms of human evolution, as the kind of violence that is the first result of humanity's mastering of tools (too we might see a visual connection between the long bones used in 2001 and the long daggers used by Ti Lung). We might then interpret the friendship between Ti Lung and David Chiang's Jiang Nan, "The Rambler" as the next stage in human evolution, where abstract ideals like friendship and honor serve to pull us out of the bloody muck to some higher plane of existence, while at the same time the just-as-abstract ideal of duty and loyalty drags us back down in a never-ending cycle of revenge-killing. This we might frame in the wider context of Chang Cheh's career, referencing other films like Blood Brothers, Duels of Fists, The Heroic Ones or Vengeance! to see the pattern of Chang's thoughts on violence, honor and friendship between men and the push-pull contradictions of the Chinese Confucian and Buddhist/Taoist traditions. The evolution angle gives us a new way of reading a recurring theme, with the potential for new and revealing insights about Chang as an artist. At that point, the question of who put the musical cue in the movie and for what intended reason doesn't matter for the work of criticism. If we were ever able to find out who did it and why, it would certainly be an interesting point of history, a matter of trivia, and possibly an entraining and revealing anecdote, but it would nonetheless be irrelevant to the value of the criticism as criticism. This is, I think, an overlooked matter in Kent Jones's call for more historicity in auteurism (to close "the gap between artistic practice and criticism"). At a certain point, the details of artistic practice are simply irrelevant to the reception of the finished film. The job of the critic and the job of the historian are often overlapping, but they are not the same.