Running Out of Karma: She Shoots Straight 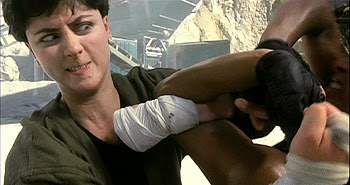 Neither this nor the alternate title (Lethal Lady) capture the film very well. It's a film about family, specifically the kind of family where everyone is a cop. This family just happens to have a lot of daughters and only one son. Joyce Godenzi stars as the new addition as she marries the lone boy, the pride and joy of the family, The Other Tony Leung. Leung's sisters all hate Godenzi, out of jealousy for her crime-fighting skills and the fact that she "stole" their brother. The most vocally disapproving of the sisters is Carina Lau (still recognizable despite some terrible hair, which gets better as the film goes along, and then goes wrong again) and she's also the most aggressively reckless of them as a cop. The family conflict plays itself out as they all fight a gang of Vietnamese gun smugglers led by Yuen Wah (it's unclear exactly what their political motivation is, I think they're still fighting the Communists 15 years after the war ended). Yuen is pretty terrific as a single-minded, bespectacled warrior, though he never really gets to show off his fighting skills (check out Sammo Hung's Eastern Condors for that, he again plays a Vietnamese guy, the final villain in that one, in which Godenzi also makes a memorable appearance). 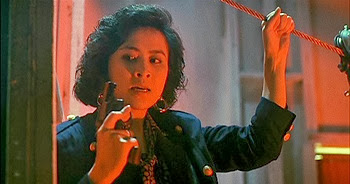 Director Corey Yuen doesn't stint on the action set-pieces, including a spectacular kidnapping at a fashion show, but the most remarkable scene in the film comes midway through, a birthday party for the mother of the clan, herself a police widow, as we and a couple of the guests know there's been a death in the family, but everyone else does not. The mother, played magnificently by Tang Pik-wan (a Cantonese opera, movie and TV star since before the war, in her penultimate performance), alone knows something is wrong, and as she, and eventually the rest of the family, realize it, the effect is heartbreaking. Yuen doesn't linger on the tragedy to grotesque effect, in the manner of heightened emotional scenes in many other HK action films, but allows it to play out naturally and on a human scale. I do not know, but can only suspect that this is the only girls with guns movie that'll bring a tear to the eye. 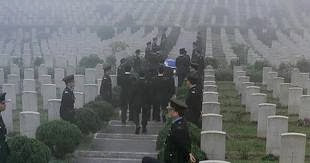 Hanging over the film like Chekov's fat man is Sammo Hung, a fellow cop and godbrother to the family who we keep waiting to get involved in the action. He doesn't, letting Godenzi and Lau take the spotlight. He does get the funniest scene in the film, when he approaches a crying Godenzi and pulls out his handkerchief and makes a big deal of wiping and rewiping his nose before offering it to her. (He does get a couple brief action moments at the end, after the ladies have won the day.) Joyce Godenzi appeared in only a few more films, including Tsui Hark and Ching Siu-tung's The Raid and Sammo Hung's Slickers vs. Killers in 1991 before retiring from film. She and Sammo have been married since 1995. 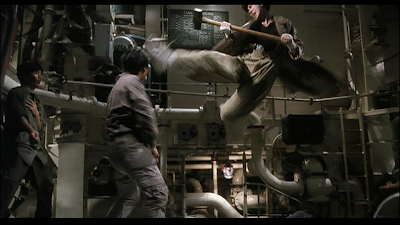