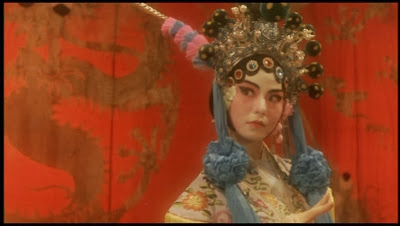 I first saw this eight months ago, on my first night home after the birth of my second kid (I had rented it from Scarecrow Video and needed to watch it before returning it the next day). Needless to say, exhausted and occasionally interrupted, I remembered very little of the experience, other than that I liked the film quite a bit. Happily, a more clear-headed rewatch confirms that initial vague impression: this is a great movie, perhaps the best melding of director Tsui Hark's twin impulses toward subversion and entertainment I've seen yet.

The setup follows two plotlines that will come together and intertwine with a third, each focused on a female protagonist. Brigitte Lin plays the daughter of a local warlord. She dresses like a man (having spent time studying in the West, and also because she's Brigitte Lin) and is secretly a revolutionary. She and fellow revolutionary Mark Cheng (memorable as Louis Koo's able assistant in Johnnie To's Election 2) have to steal some MacGuffins from the general's safe. Cherie Chung (from The Enigmatic Case) plays a musician who stole a box of jewelry from a soldier (Tung Man, played by Cheung Kwok Keung) in the chaos after the previous general was run out of town. Through a series of complications, the box ends up at a local theatre troupe, where Sally Yeh, daughter of the director (played by film director, actor, clock Wu Ma), wants very much to go on-stage but can't because women aren't allowed to perform. Lin and Cheng also find themselves at the troupe, as it's the favored entertainment for the most powerful people in town, including the local police commander/gangster Liu, who becomes infatuated with the star actor, Fa. 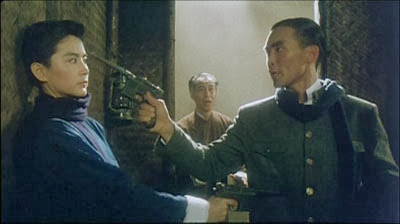 That covers the first 20 minutes or so of the film, what follows is an elegantly structured twisting and deepening of the characters and their relations as the film progresses through a variety of suspense and comic set pieces. Ching Siu-tung choreographs some exceptional action scenes, usually featuring Mark Cheng jumping into or shooting a bunch of bad guys (the sequences at the theatre make ingenious use of the space's multi-leveled design, with Cheng diving under and jumping over tables and benches, then on the main stage and up to the stage above it before swinging across the rafters and finally onto the rooftops), but there are also cunningly designed short sequences like the one David Bordwell describes early in Planet Hong Kong, where Mark and Cheung and Cherie hide in Sally's bed from her father. The two father-daughter relationships are especially poignant, with Lin's eyes exploring every aspect of her self-hatred for destroying the father she loves while opposing everything he stands for politically. It's most remarkable to see her usually implacable image break down in anguish near the end of the film and even in happiness in a brief middle section where she gets drunk with the other girls. As well Wu Ma brings a note of knowing sadness to the theatre director father, a man who we took as a stock type gains nuance when we realize exactly why he so strictly keeps his daughter away from the stage: because if she catches the eye of the powerful, she'll be forced to prostitute herself for the sake of the company (as Liu attempts with Fa). Complex as well are the film's romantic relationships. Not so much the main one between Mark and Brigitte (if that even is a romance given Lin's ambiguous orientation), but the all but unspoken one between Cheung (whose soldier I don't think is even named in the screenplay) and Cherie, which exists almost entirely in the subtle looks he gives her of longing and disappointment at her more venal moments. That soldier, in fact, is one of the more fascinating characters in the film: a hapless guy, bullied by his fellows, who joins the revolutionaries by chance, falls in love with a girl and ends up saving the life of the heroine in a spectacular last minute rescue. There are few martial arts films I know of that have so many richly developed characters and relationships. The only one that even comes to mind in Tsui's own epic Once Upon a Time in China. 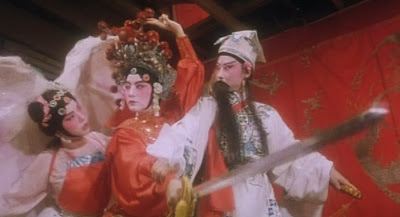 The Peking Opera setting provides Tsui a world full of potential meaning, and he plays it up beautifully. The gender reversals required of the all-male stage echo the real-life reversals of Lin's character, as she not only dresses like a man but takes on the traditional hero role (note that it's the women who rescue the men time and again). When the other two women make it on stage, they become women impersonating men impersonating women, just as they more or less unwillingly take on the roles of revolutionaries. Eventually, the politics that undergirds the plot comes to be seen as a form of performance, with one general shuffling on stage as the other exits, the rebels scheme amounting to a lifting of a curtain (exposing certain warlords as conspiring with foreigners) all while the real power lurks behind the scenes, in the form of the black clad local police force. That the local commander is both bluntly evil and homosexual (as well as the ultra-effeminate depictions of the male actors) might be a cause for concern were it not for the sincere warmth with which Tsui depicts the homoerotic relations between the three women (Sally in particular seems infatuated with Brigitte). Instead, what we see is sexuality, with politics, as another kind of performance that serves to either mask our baser urges (the violence of the commander, the greed of Cherie) and/or complicate our nobler ones (the father-daughter relations, the multiple instances of self-sacrifice throughout the film, as each hero in turn faces death to save the others). 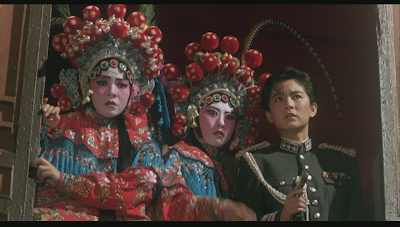 The result is a film not too far in spirit from the anarchic nihilism of Tsui's earliest films, the burn-it-all youth drama Dangerous Encounters - First Kind or the cannibal comedy We're Going to Eat You. But instead of merely exposing the world, politics, and human relations as a sham, Tsui instead finds a humane warmth at our core, while simultaneously celebrating the artistry of that disguising performance itself: Mark's ultra-cool secret agent and Lin's resolute stoicism, as well as the athleticism of the opera performers. The film opens with a series of close up shots of Peking Opera costumes and props and actors, scored to a traditional sounding song with a modern synthesizer beat. And it ends with a close-up from that same series of a performer in full make-up, laughing maniacally at us, or maybe with us. 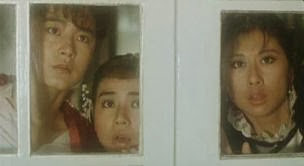