Summer of Sammo: The Heroic Ones

A lavish Chang Cheh fable set in the Tang Dynasty (in the late 9th Century) and based more or less on actual historical events. The Empire is in turmoil as an upstart general has rebelled and captured the imperial capital at Chang'an. The Emperor and his advisors call on a fierce warrior, a King from the north, for assistance. He brings his army and his 13 generals, all his sons or adopted sons and recaptures the city. However, in doing so, two of the generals become jealous of the youngest, the best warrior among them, and conspire with one of the Emperor's aides, a counselor who'd been offended by their barbaric ways and had a personal grudge against the youngest son, to assassinate the King. Spectacular fights and grisly deaths ensue.

The King is based on Li Keyong, a Shatuo warlord (the Shatuo were a Turkic tribe from the north, between Mongolia and China proper, based around Shanxi, just west of Beijing) who came to the defense of the Emperor in the face of rebellion during the last stages of the Tang Dynasty, the breakup of which lead to the Five Dynasties and Ten Kingdoms Period, with his oldest son later becoming the first Emperor of the Later Tang Dynasty. In 881, Li was called in to fight the rebel Huang Chao who had captured Chang'an (located to the southwest of Shanxi). He chased him off but was later attacked by an ostensible ally after he made a big drunken scene at the ally’s castle. Li survived and led a ridiculously eventful life. He also had 13 Generals, sons and adopted sons, the most renowned of which was the youngest, Li Cunxiao, an adopted son, who rebelled against his father after being falsely accused of conspiring with his father’s enemies by one of his jealous brothers. This act of petulance resulted in his execution at his father’s hands by drawing and quartering.

It’s unclear if Chang Cheh and Ni Kuang based their screenplay on the historical record or one of the literary adaptations of events. Apparently Li Cunxiao is presented as a heroic figure in Luo Guanzhong’s Romance of the End of Tang and Five Dynasties Histories (Luo’s better known novel is Romance of the Three Kingdoms, which I’ve read half of: it forms the basis of a number of video games as well as John Woo’s recent epic Red Cliff), but I’m not sure if this is an adaption of that, at least it isn’t credited as such. Chang’s film is narrated very much in the classical romance mode, a pre-novel style of literature that flowered in the late Yuan and Ming Dynasty period (14th Century), roughly contemporaneous with the same period in Western literature, for example in the Arthurian romances of Chrétien de Troyes, who wrote in the late 12th century or The Canterbury Tales, written by Geoffrey Chaucer around the same time Luo was writing Three Kingdoms (as well as editing The Water Margin, another of the Four Great Classical Novels of Chinese literature, one which Chang and Ni would adapt in a 1972 film of the same name as well as 1975’s All Men Are Brothers. (Wikipedia has this brilliant note on the film of The Water Margin that sums up the level of respect with which these film classics were treated at the time, the situation has not much improved: “The film was bought for release in the US by New World Pictures. Roger Corman cut out a third of the film, had the Shaw brothers shoot an additional sex scene and added a new narration.”)) This style of storytelling is episodic and pre-psychological, with character defined by action rather than an internal monologue or soliloquy along Shakespearean lines. The characters tend to represent types or abstract qualities more than fully-fleshed out human beings. You can find echoes of this in modern Hong Kong action films like Drug War, where the main characters are given no life outside the mechanics of the plot, where everything we understand about them as people can only be inferred by their actions or the physical behavior the actor.

David Chiang plays Li Cunxiao, the favored 13th son of Li Keyong. When we meet him, Li’s men have been brought to a banquet to celebrate their joining the Emperor’s cause thrown by the silk-robed and stuffy imperial retainers. The Northerners, clad in furs, commit wild improprieties, drinking massive amounts of wine from ox horns and generally acting barbaric. Chiang is the drunkest of them all (they actually have to go find him, as he passed out before the party even started) and is challenged by one of the retainers to capture a rebel general. He does so (starting with a graceful slo-mo flip off the castle wall) but the retainer reneges on the wager, sowing the seeds of the later tragedy.

As the generals attempt to capture Chang’an by infiltration and assassination, two of them disobey Chiang’s order and blow the group’s cover. They find refuge at the home of a loyal young woman (played by Lily Li) whom Chiang rescues when those same two sons try to rape her. After they escape and the city is recaptured (the bandit Huang burns the town and flees in the face of Li’s army), Chiang will return to her empty house, vainly searching for her. It’s the rare scene of romance romance (as opposed to historical Romance) in a Chang Cheh film, shot in a lovely orange studio sunset as Chiang realizes thanks to the ravages of war, he’ll never again find this girl he might have loved.

From this point there’s nothing but heroic, bloody tragedy. Li and his army are invited to the town of the offended retainer (now conspiring with the disobedient and jealous brothers) who invites them to a banquet. Li and his 11th son, his second favorite, played by Ti Lung, attend and are tricked (rather easily because they’re so barbaric) into getting way too drunk, along with their couple dozen guards. The retainer’s men then attack and Ti leads a desperate escape, chopping bad guys down by the score. Like the attack on Chang’an, these scenes are of the over-the-top one man army variety, but they are nonetheless thrilling to watch, the masses of men beautifully coordinated by fight directors Tong Gaai, Lau Kar-leung and Lau Kar-wing (Kar-wing also plays one of the generals, as does Lo Wei, who would shortly become best known for directing Bruce Lee in The Big Boss and Fist of Fury). Ti Lung holding a bridge against an entire army proves to be one of the most exciting sequences in any Chang film, with one of his great endings providing perhaps the key image of Chang’s whole career (remember: Chang’s heroes die standing up).

After the ambush, the jealous brothers have one last trick to play, leading to Chiang’s character reaching the same ending his historical counterpart suffered (in the same grisly manner, quite artfully shot by Chang) but without the stink of defiance falling on his hero. In reality, Li Cunxiao rebelled against his father out of spite, because he was accused of disloyalty he acted disloyal. In Chang’s world, Li Cunxiao is a victim, but only because he’s so willing to believe the best in his brothers. It is Chiang who prevents their father from beheading them after their transgressions in Chang’an, and their final trick is based entirely on his willingness to trust them to an absurd extent. Thus does a real person, complicated and contradictory and almost certainly unpleasant, become a heroic, romantic figure, one whose tragic weakness is his loyalty and belief in his brothers. It’s the brotherly code that makes the rebellious generals so vile, but it’s the code also that enables their treachery to go so far undetected. This contradiction, the Code cutting both ways, will form the heart of the heroic bloodshed genre as it gets further developed from Chang to John Woo and Ringo Lam to Johnnie To. 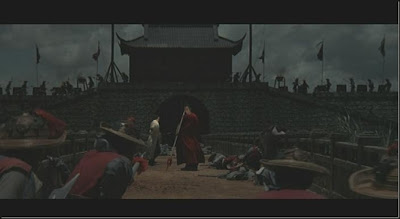