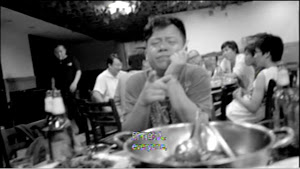 The Dragons & Tigers Award for Young Cinema at the Vancouver International Film Festival has an illustrious history. Handed out every year since 1994, previous winners include such now-vitally important filmmakers as Hong Sangsoo, Jia Zhangke, Kore-eda Hirokazu, Liu Jiayin, Lee Changdong and Wisit Sasanatieng. Winning the award this year, or should I say last year, was Chinese director Li Luo, for this, his third feature. I managed to see only five of the eight films in competition but my top choice would have been Song Fang's Memories Look at Me, with Li's film coming in second (the others I saw were A Fish, A Mere Life and Moksha: the World or I, How Does that Work?).

Shot in a minimalist black and white, Emperor Visits the Hell is a modern-day retelling of three chapters from the Ming Dynasty epic Journey to the West, one of the foundational texts of Chinese literature and a never-ending font of film and television stories. After the Dragon King, a local gangster, disobeys an order from Heaven and changes the weather, he appeals to the Emperor, a government bureaucrat, to protect him from a death sentence at the hands of Heaven's Executioner. The Emperor, Li Shimen (played by Li Wen) does his best to protect him, but the Messenger falls asleep and manages to kill the Dragon King in a dream, which is enough to kill him in reality. The Dragon King, as a ghost, then haunts the Emperor and causes his death. But, with the Executioner along to guide him through the underworld, the Emperor finds away to bribe his way back to life by altering what is written in the Book of Life and Death, a bureaucratic solution to a supernatural problem. It’s not that the Emperor breaks the rules, rather he bends them to conform to his desires. The Dragon King’s crime was outright, the specific defiance of a heavenly command. The Emperor obeys the rules as written, he just changes the writing, like Captain Kirk with the Kobayashi Maru. The film ends with the Emperor drunk and pontificating at a celebratory feast in a loud and crowded restaurant, and here the distinction between film story and reality itself breaks down, as the actor begins speaking as himself, rather than his character, a kind of riff on the ending of Abbas Kiarostami's Taste of Cherry. Novel, film, reality, these too are arbitrary categorizations that one with enough power, like a motion picture director, can render meaningless. 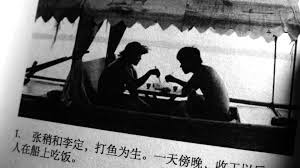 In presenting its award, the Dragons & Tigers jury cited not only the film’s “mordant humor” but it’s “audacious integration of multiple levels of storytelling and filmmaking”, which it most certainly accomplishes. The film demolishes every border it comes across: dream and reality, past and present, film and literature, fiction and documentary. The Emperor, a man with both money and governmental authority, bends reality to his needs, a none-too-subtle crack at the state of contemporary Chinese society, where the meanings of laws and borders and even words can change depending on one’s wealth, position and connections. The use of black and white and the deadpan sense of humor immediately call Jim Jarmusch to mind, and there’s a blankness to the performances and a just slightly off the beat editing style that recalls nothing so much as Jarmusch’s masterpiece Dead Man, another film about a trip through the underworld where the normal rules and structures of reality fail to apply. It’s this dreamy rhythm that still haunts me nine months later, much more than the film's post-modern satire.
Posted by Sean Gilman at 5:15 PM