An early supporting role for Sammo Hung as he and Angela Mao (the film's alternate title is the somewhat awesome Lady Kung Fu) travel from Japanese-occupied Korea to China in 1934 to establish a martial arts school, teaching the newly invented style of "Hap Ki Do" which looks like a melding of kung fu punching and kicking with judo flipping. Of course, once in China, they immediately run afoul of the local Japanese-run martial arts school, leading to many bloody encounters with Japanese students and the Chinese and Korean turncoats who have joined the enemy. Eventually the metaphor becomes even more blatant as the evil Japanese Master (who sports a Hitler mustache, naturally) decides he's going to annex the Hap Ki Do school and make it a part of his own school. Once they're all under the Japanese umbrella, there would be no reason for fighting; they'll be one happy family.

Sammo plays the youngest, most hotheaded Hap Ki Do brother, brave but always getting into trouble by defending the weak against the Japanese bullies. The one word their master gave them, the one warning, was "Forbearance". Not to strike out against the enemy but to endure and outlast it. His students, but most especially Sammo, repeatedly fail to follow this advice (despite Sammo going so far as to write the character on his hand as a reminder), and the film, more than it is about the peculiarities of early 30s Japanese aggression, is about the conflict that lies at the heart of many a kung fu movie: that between the Confucian ideal of filial piety, respect for one's elders and the Buddhist/Taoist ideal of withdrawal from the material concerns of the world on the one side and the demands of social and political justice on the other. This is often expressed in anti-colonial terms, whether against the Manchurians (The 36th Chamber of Shaolin, Fong Sai Yuk), Europeans (Once Upon a Time in China, Drunken Master II) or Japanese (Fist of Legend and this film).

Director Huang Feng keeps the plot moving briskly, if occasionally at the expense of cutting out some, probably tedious, connective scenes. He films the fights with an eclectic mix of POV shots, shaky handheld camera, overhead shots and standard Shaw Brothers-style head-to-toe framing, with fairly long takes that show off Mao's impressive kicking abilities and the manic intricacies of the stunt choreography. I haven't seen any of Huang's other work, though he did co-write Sammo's directorial debut The Iron-Fisted Monk. The only thing I'd seen Angela Mao in before this was Enter the Dragon (she has a brief but memorable appearance as Bruce Lee's doomed sister). She's terrific, easily holding her own against the ridiculously good stunt team Huang and the Golden Harvest studio had assembled: Sammo (who also served as stunt coordinator), Yuen Biao, Corey Yuen, Billy Chan, Lam Ching-wing and Jackie Chan. Mao has a palpable look of desperation when she fights, rather than the placidity of a Gordon Liu or the cool intensity of Bruce Lee, she really looks like she's scared but determined to keep fighting regardless. Michelle Yeoh and Cheng Pei-pei sometimes seem afraid to show too much emotion when they're fighting, as if people will take them less seriously because they're women. Mao apparently has no such qualms, and her emotionality adds depth to her action sequences. Sammo, on the other hand, plays his fights straighter than he would in his own later films, with less acrobatics (a casualty of the film's chosen fighting style) and less humor. He does give a fantastic double take after being hit in the head with a metal pole, a brief blank look at the camera that doesn't oversell the comedy (like he and Jackie Chan would become prone to do later on). As an actor, this might actually be one of his best performances.

The end of the film has a nifty twist on the compromised ending of King Hu's Come Drink With Me. In that film, Cheng Pei-pei, who'd played the hero throughout, is unable to defeat the final villain and must be rescued by a man (this is reportedly not how Hu wanted things to end, but rather a Shaw Brothers imposition). In Hapkido, Mao brings in a ringer for her final fight, the male head student of the Korean school. Tall and powerful, we think he'll be the one to defeat the Japanese Master, but he fails. In the end, the woman gets to come to his rescue. 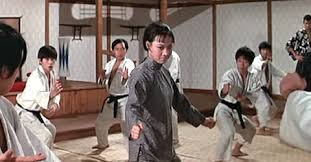