On Dr. Jekyll and Mr. Hyde 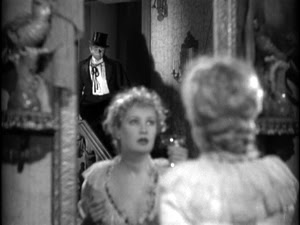 Somewhat surprisingly, director Rouben Mamoulian uses less Expressionism in this horror film than he did in the backstage musical Applause two years earlier, and he did so in the same year that Hollywood's co-optation of German Expressionism became complete with Universal's Frankenstein and Dracula.

That's not to say that this film is any less experimental than its predecessor. Instead of shadows, Mamoulian builds his horror out of close ups and POV shots, mostly of Frederic March as the eponymous Victorian monster and his hirsute dark side. The film begins locked in Jekyll's POV, a lengthy and slightly irised roving shot that firmly establishes both the obsessive tunnel vision that will destroy Jekyll and our complicity with him. We don't see March himself until he looks in a mirror, and his reflected appearances will become a recurring motif, culminating in his arrival in the background behind Miriam Hopkins's doomed showgirl, slinking out of the back of her head, a nightmare made tangible. 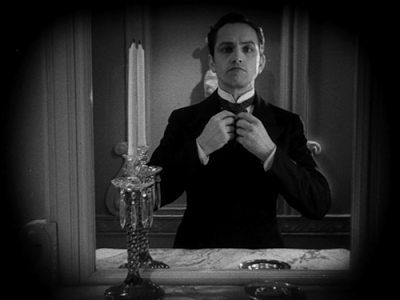 A repeated pattern of close-ups is even more disturbing. Mamoulian will begin a scene, say March and his virtuous fiancee Rose Hobart talking about how much they love each other, in a balanced two shot, both actors perpendicular to the camera. He then begins a shot/reverse shot exchange, but instead of the typical over-the-shoulder angle shots, the characters are framed dead-center, looking straight into the camera, like in Ozu, but closer, so that only their head is visible (Ozu frames them with neck and shoulders too). He then moves even closer, to extreme close-ups of the actors' eyes. The dialogue (their engagement is being delayed by her father, a proper gentleman) provides the context: the two are very much in lust and, bound by society, cannot express it in any way more physical than burning hot eyeballs.

The critique of Victorian sexual repression is very much on display in this pre-Code film, much more than in the earlier adaptation with John Barrymore or the later one with Spencer Tracy. Hopkins is present first as a physical object, stripping in her first scene with Jekyll, tantalizing both him and the audience with ample displays of flesh. Upon transforming into Hyde, the first thing he does is track her down and entrap her, for months it seems, in a kind of sexual slavery. The repressed male id, once free, expresses itself with not only violence and rape but the need to subjugate, to control, to repress the sexually attractive woman. Jekyll's need to repress his sexual desire is transmuted into Hyde's need to oppress the object of that desire. Thus Jekyll creates Hyde: both are monsters. And thus the men of the British Empire, with their relentless need to control not only the far corners of the world but the depths of their own psyche are exposed: nasty, crude, brutish and above all lustful.