The Laurel & Hardy Project #14: Call of the Cuckoo 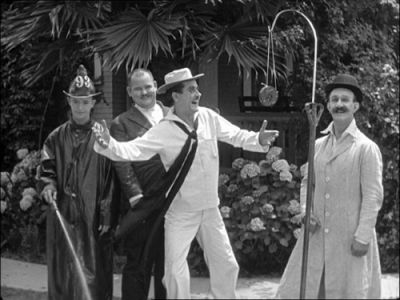 Like a few others in this series, this is only tangentially a Laurel & Hardy film. It's actually a Max Davidson short, the second I've seen after Jewish Prudence, a very funny, well-constructed film I looked at back in February of last year. This is a much looser film, it feels more like the gang at the Hal Roach Studios just goofing around than a sophisticated comedy classic. Credited as director is Clyde Bruckman, a frequent Buster Keaton collaborator (The General, Our Hospitality, Sherlock Jr among others) making what (as far as I can tell is) his Roach debut, or at least his first film with Laurel & Hardy, shortly before Keaton made his disastrous move to MGM. The film has a lot in common with an early Buster Keaton short, One Week, which as far as I know Bruckman was not involved with in anyway.

Davidson plays an exasperated father who wants to sell his house so he, his wife, and their son can escape from the lunatics who live next door. A title card asserts that these guys, played by a Roach Murderer's Row of Stan Laurel, Oliver Hardy, Charley Chase and James Finlayson, are training to be radio broadcasters, "the quicker they go daffy, the sooner they get a diploma". I'm unsure how literally that's supposed to be taken, but it doesn't matter, the point is the four of them are incredibly annoying, making terrible jokes with bottom-of-the-barrell slapstick, the kind you'd expect from any random morning DJ pair (do they still have those?). The four cuckoos aren't supposed to be funny and at that they succeed: their performance is as much a parody of terrible slapstick comics as it is of the radio. Seltzer bottles, a William Tell bit (Hardy gets shot in the ass), ridiculous outfits (Laurel wears his suspenders criss-crossed, Chase wears an over-sized sailor suit with a monocle), terrible intertitle puns and so on. 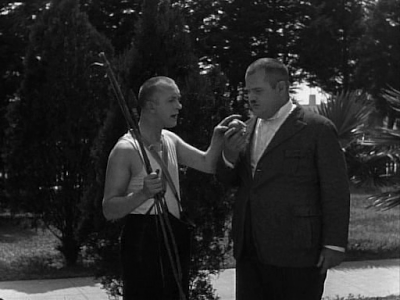 Anyway, someone comes along and offers to trade houses with Davidson, which he foolishly accepts, sight unseen. The second reel documents the travesty of a house ("it took two days to build and two years to sell" gossip a couple of neighbors) and its destruction. Light switches turn on lights in other rooms and occasionally showers, the kitchen faucet dispenses gas while the stove shoots out water, the parlor floor is slanted requiring the piano to be propped up with a chair lest it slide to a less desirable side of the room, the bathtub falls apart (giving us a side-nude shot of Max Davidson, which surely no one asked for). When Davidson's extended family arrives for a house-warming party, things quickly escalate to an all-out brawl or no apparent reason, but it culminates in an inspired call-back as the chair holding the piano is removed (to be used as a weapon), sending the instrument crashing through one wall, then the front door, down the walk and into Davidson's car, which promptly disintegrates. This is followed by the inevitable punchline, with the cuckoos announcing they've just bought the house next door. Not only does the respectable bourgeois family man abandon his perfectly nice house for a travesty, even then he can't escape the agents of chaos that surround him.

One Week, in which Buster Keaton assembles a house using a corrupted set of instructions creating an architectural monstrosity which devolves in hilarious fashion, is one of the most brilliant works in silent comedy, if not all of film history, so this can be forgiven for not reaching that high standard of perverse home destruction. But I do think this could have been funnier. Davidson doesn't really do much, he's mostly confined to reaction shots (either shrugging his shoulders and scratching his chin, or bringing his palm to his cheek Jack Benny-style). Laurel, Hardy, Chase and Finlayson are pretty much relegated to cameos: the film's structure isolates the funniest actors from the funniest prop (the house). Even still, it looks like everyone involved had a blast making it, which is enough. 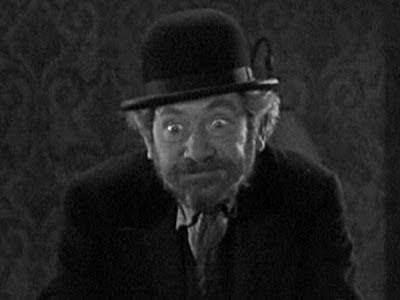