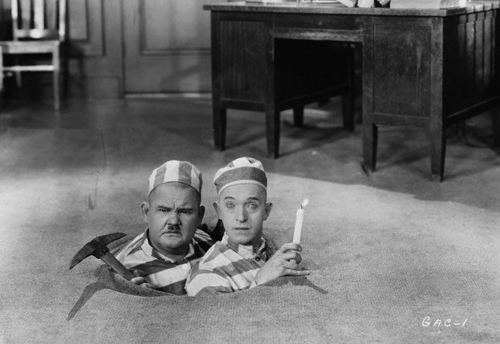 For only the second time in this series, the first since the fourth film (made a mere seven months earlier), Duck Soup, Stan Laurel & Oliver Hardy play co-protagonists.  Usually Hardy either had a bit part or played the villain, but here they are on the same side.  Despite the co-star billing though, Hardy is really still merely support for Laurel.  They play prisoners in James Finlayson's jail and the first reel follows a few of their escape attempts and subsequent punishments.  Laurel goes all-out with his 'weepy face' in these scenes, in fact the film opens with a close-up of it, but rather than merely repeating himself, Laurel does continue to build on the face as he's done in some of the earlier shorts.  The longest sequence of the first reel, a jailor putting the prisoners through a series of calisthenics, finds Laurel beautifully out-of-sync with the others' movements, an agent of chaos getting repeatedly smacked in the face which leads to his signature over-reaction.  After thus setting up the face (as he has in every other scene of the film so far), he begins to occasionally break in and out of it with deadpan asides to the camera, slight eye rolls that indicate, as in With Love and Hisses, the phoniness behind the act: he's a man acting like a child, not a man-child. 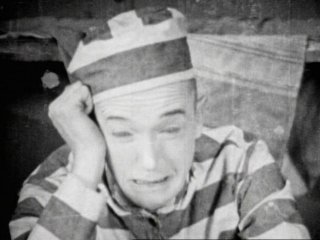 Hardy though, still doesn't have much of a persona.  There are hints of exasperation with Laurel, but while Laurel gets the big set piece in the calisthenics scene, Hardy pretty much is resigned to the straightish man role.  Looking at the structure of the film reveals its true single-star nature.  The first half of the first reel sets up their situation (prisoners) and their first escape attempt (they dig a tunnel but end up in the warden's office) and the second half is the calisthenics and their second, successful escape attempt (they disguise themselves as painters and walk out the front gate).  The first half of the second reel is a slow motion chase sequence, a wonderfully surreal vision of the two of them wandering the streets painting random objects white while under the suspicious eye of a passing cop (they apparently think that painting the hand rails, windows and cars they come across makes them look less suspicious - this is by far the best thing about the film, it's the weirdness of conceits like this that keep drawing me back to these ancient comedies) and ending with the two displacing the very French dignitaries James Finlayson is hosting at his mansion within the prison (introduced like Chekov's gun in the beginning of the first reel). 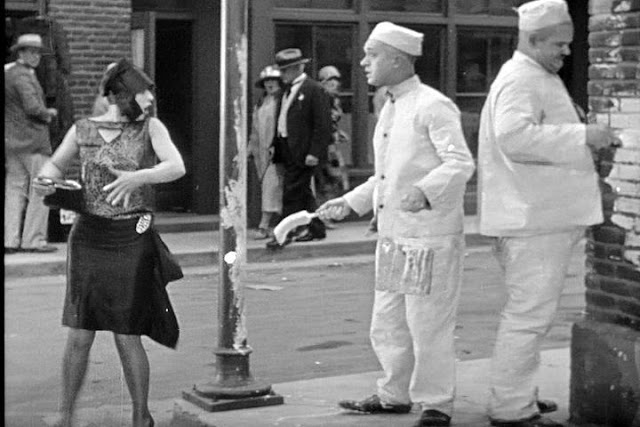 With a true pair of equals, the subsequent dinner scene in the mansion, which forms most of the second half of the second reel, would provide an opportunity for Hardy to take center stage, creating a nice formal balance: each reel would start with team action and end with the focus on one of the team members.  But instead, it's another showpiece for Laurel, who engages in a bit of low-key slapstick attempting to eat a grape with a fork (he keeps trying to scoop it up and it rolls away, around the plate, across the table, down a old lady's dress, you know how it goes).  It's funny enough, but it reduces Hardy to bystander, rather than partner.  And then film then ends all too abruptly.  Finlayson takes them to their old cell block on a tour, they are recognized and give up. No chase, no comedy, just a shrug and it's over.  Hardy never has a chance to do anything interesting.  But I suspect he will before too long.
Posted by Sean Gilman at 11:50 PM